Long time AAS readers will remember a fairly well acclaimed article I did back in 2010, entitled: "There's a bookmark for that!" The idea was to highlight that, even though there weren't necessarily Symbian applications created for every service that iOS and Android boasted, the services were eminently usable with nothing more than a simple bookmark in Web. Consider this piece an update of that original piece, refining the idea and bringing the whole thing up to date. eBay, Amazon, Wikipedia, IMDB, Google+, BBC Sport and much more, all now an icon on your homescreen and in your app menu - it's easy to set up, looks good and the concept really does help fill what would otherwise be an ever-widening 'gap' in the Symbian ecosystem.

Now, before going headlong into Web shortcut land, which I know won't be to everyone's taste or satisfaction, I should acknowledge that there are still plenty of services which do have excellent, fully functional Symbian OS applications. For example:

... among others. However, the Internet's a big place and there are dozens, if not hundreds of other popular web services and reference sites, none of which have a dedicated Symbian application. Which is where this feature comes in.

Way back in the mists of time...

From the original piece:

Over the last few years, I've had a burning conviction that's been growing and growing as I watch the current craze for 'Apps' blossom. Now, I've nothing against genuine applications or games, but it has to be said that a large number of so-called 'Apps' are simply scraping or managing exactly the same data as you get right now, on any phone, for free. And my way there are no installations, no complications and no hassle. Apps? Pah - I've a new slogan to rival Apple's. "There's a Bookmark for that!"

Now, don't switch off because I referred to a 'mobile' web site. In the old days (2004!), a mobile web site was usually a very poor relation to the full web site, was often little more than a placeholder and, in extreme cases, was actually WAP-based rather than using standard HTML. In 2010, most mobile web sites mentioned on these pages have a very healthy fraction of the functionality of their more bloated desktop equivalent. Which means far less crud and a far higher proportion of real content.

Given that a 'desktop' web site (apparently the marketeers and bloggers expect us to browse these, on our large touch-screened devices, though I have to confess it's something I only do as a last resort!) can often be several Megabytes of code and images, using the 'mobile' version instead can save huge amounts of bandwidth. A 2MB desktop page will often only be 20Kb as a mobile page, a saving of over 100 times.

Of course, bandwidth is more plentiful in 2010 than in 2004, but not unlimited (as many people are finding out). Saving bytes isn't necessarily about keeping bandwidth down (though it will help a lot here too), it's also about drastically reducing downloading and rendering times. A mobile web page will usually load in a couple of seconds, where the equivalent desktop page would take the best part of a minute to do much the same thing.

So, we have an Internet that's more mobile-aware than ever, with servers auto-detecting a mobile phone OS and adapting their content automatically, so why not use this in Web on your smartphone to bypass a lot of typical high profile 'apps' entirely? Set a bookmark to each and you're done. And all with only one icon slot used on your S60 menu!

Fast forward three years then, and the situation is much the same, albeit with all byte counts doubled. In fact, this article is all the more appropriate in the light of Symbian's official deprecating and because more and more web services and sites are now both mobile-aware and intelligent in terms of what they serve up.

Of course, some 2013 Internet services (e.g. Netflix) are heavily media-centric, in which case it's no surprise that there's nothing available via the browser for Symbian, but happily the majority of sites are more than happy to serve content for nHD screens and for older devices.

The title change, from 'bookmark' to 'shortcut' comes thanks to the way in which any web page can now (in Symbian Belle onwards) be 'installed as an application' from within Web. Meaning that you can get to it from the main application menu/folders, plus (crucially) you can also put it on any homescreen, for instant access.

To do this for any specific web page, either mentioned below or of your own choice/preference, just open it up in Symbian Web, find a suitable blank spot in the page layout and long press on it - 'Install as application' will be offered. The actual installation is quick and painless, but on a 'busy' device (my 808 has over 60 third party apps installed) do give the OS ten seconds or so each time to add the app to its main indexes - don't rush it too much! 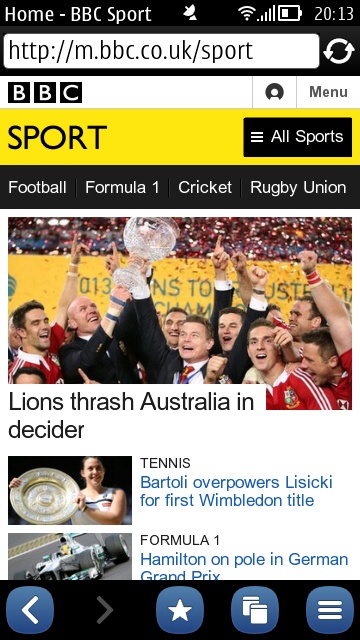 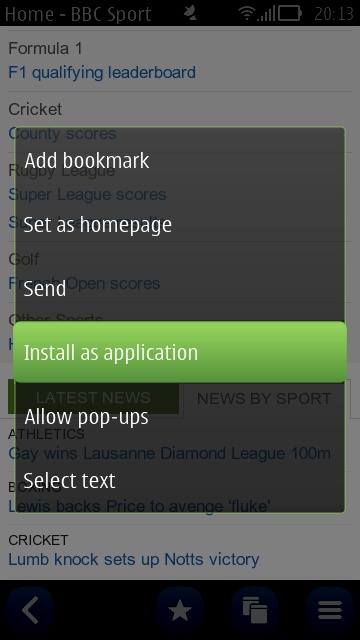 Long pressing on white space in a web page, to get the menu shown... 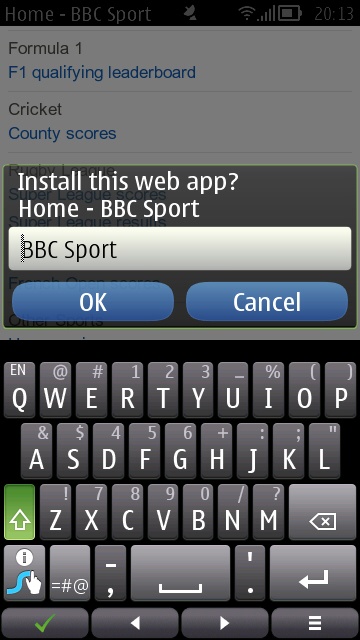 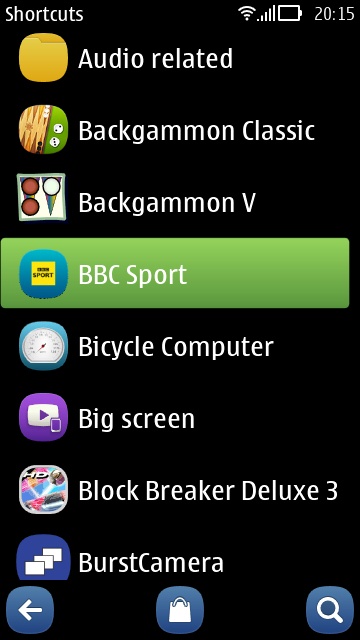 Usually, you'll need to trim the name for neatness. Once installed, long press on a homescreen space and 'Add shortcut', etc.

In fact, a few of the icons shown below were from the AppMe service as well, which I wanted to test, to check it's still working (it is). This has the advantage that you can use any icon of your choice (or download a pre-made installer from someone else's icon/URL choices), but is obviously a few more screen taps to set up. Your choice as to which way to go! 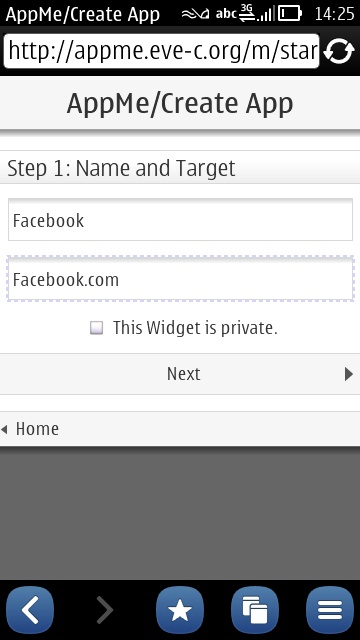 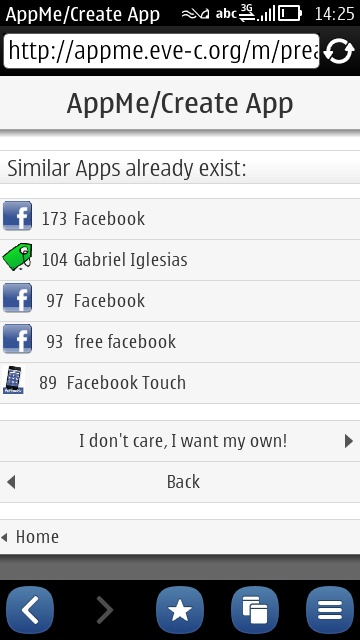 With AppMe, you can choose to create your own shortcut application from scratch or pick from any number of similar applications that others have previously created and just download them directly: 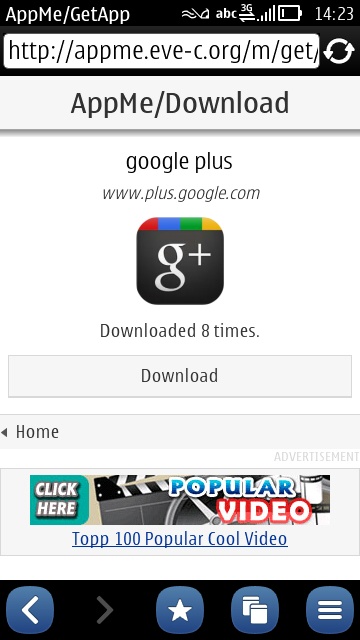 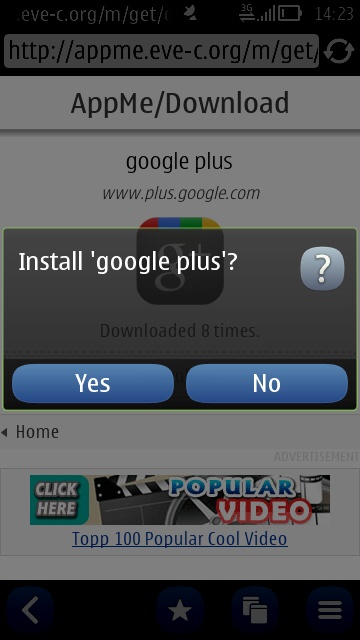 Shown below is one of my homescreens, compiled during writing this feature. Note (again) the mix of Web-saved applications and AppMe-downloaded ones: 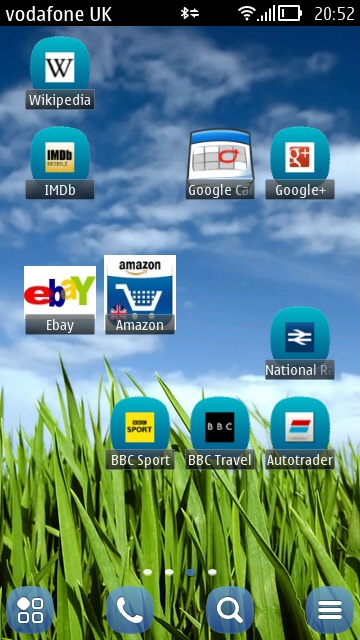 In a real life set of homescreens, of course, such shortcuts would be intermingled with other widgets and homescreen elements, according to preference.

The system works rather well, even on 'budget' devices like the Nokia 603 or 700, or older phones like the N8 and C7. Here are a few sites/apps which work rather well on nHD portrait screens, along with any URL notes you need to know.... 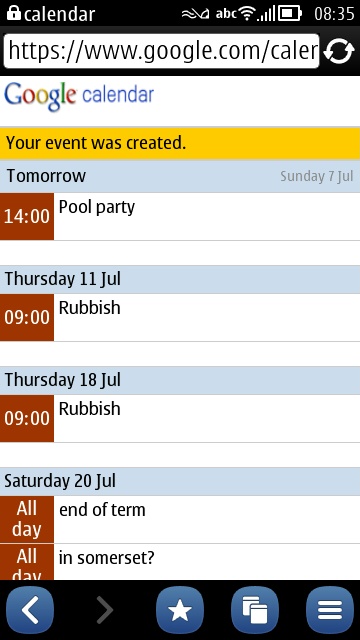 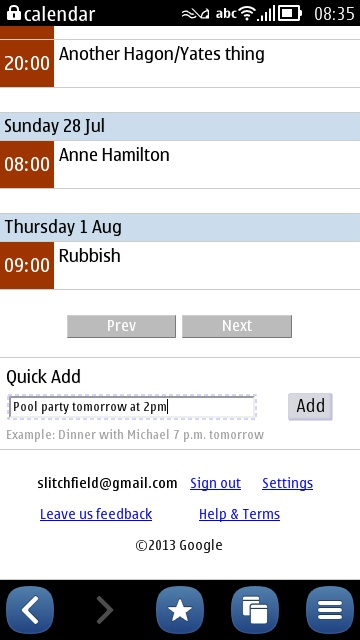 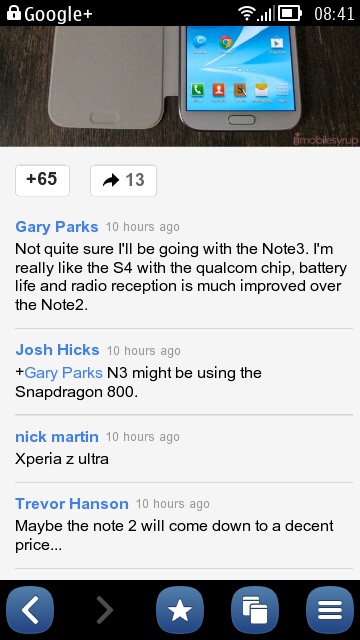 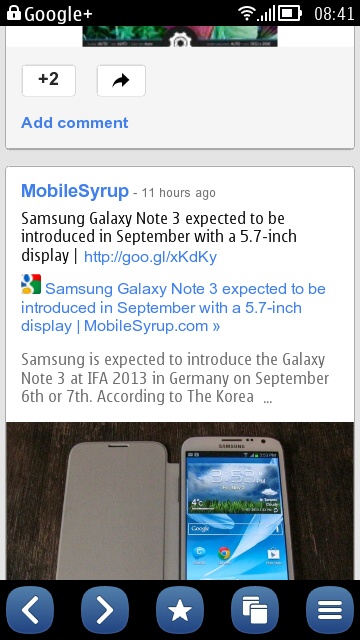 Google+ - works very well here in the browser, with the exception that if you delve into comments, you're not returned back to the exact same place in the post flow afterwards. 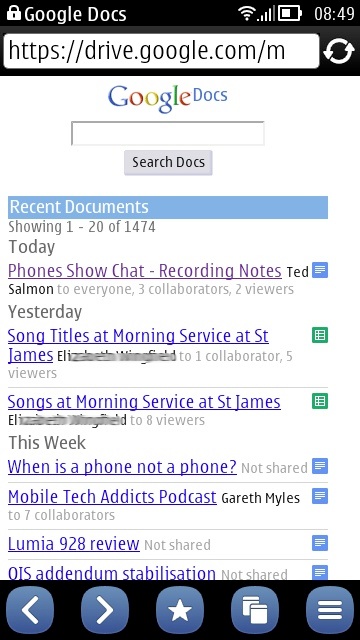 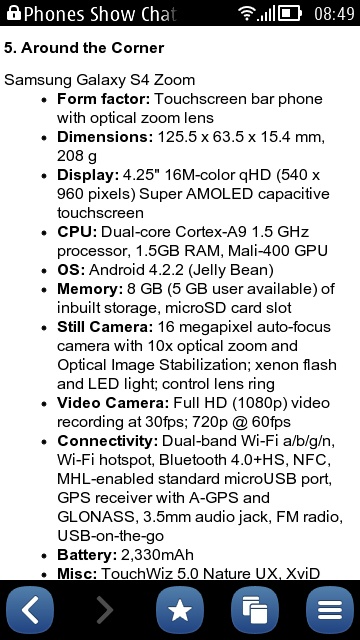 Accessing my Google Drive - every document comes up, though formatting can be slightly basic and there's no editing functionality. 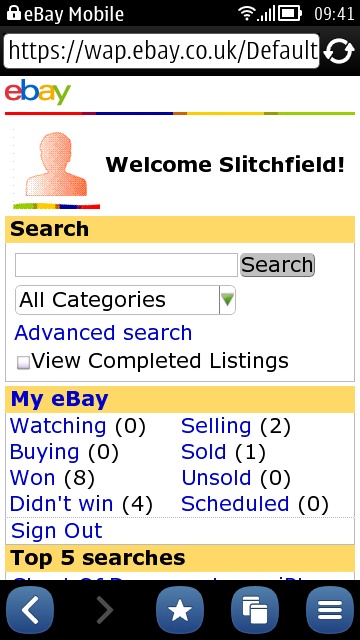 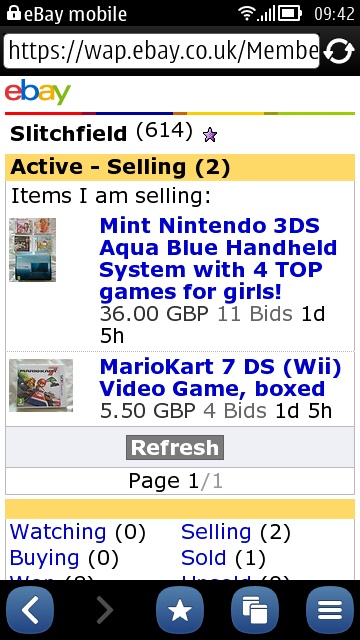 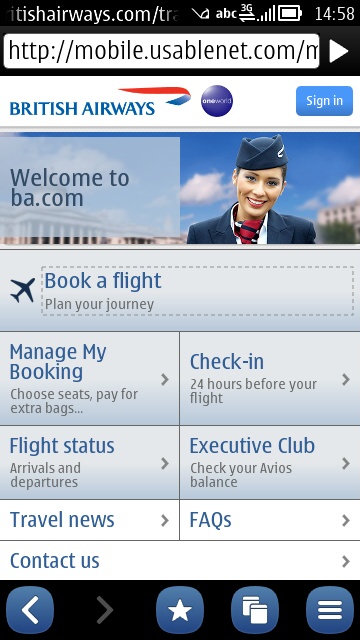 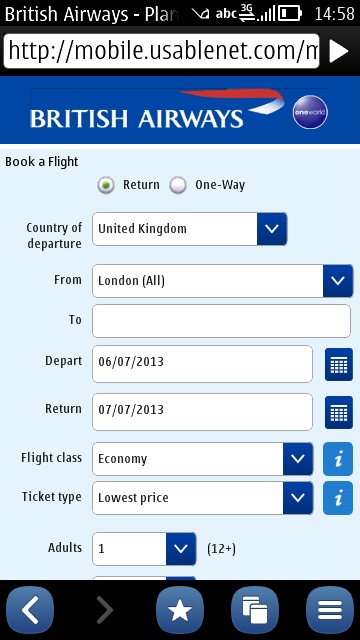 Ignore the URL at the top, this is where mobile users get bounced to - but the British Airways site works quite well, considering... 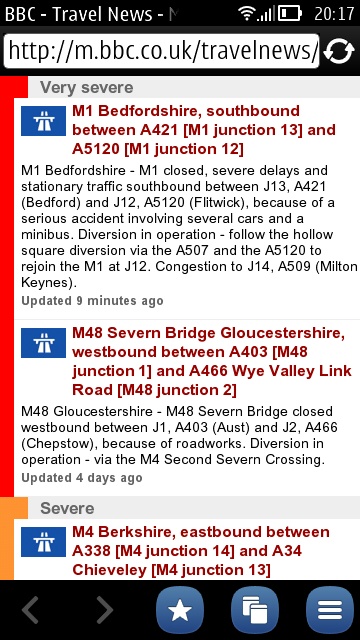 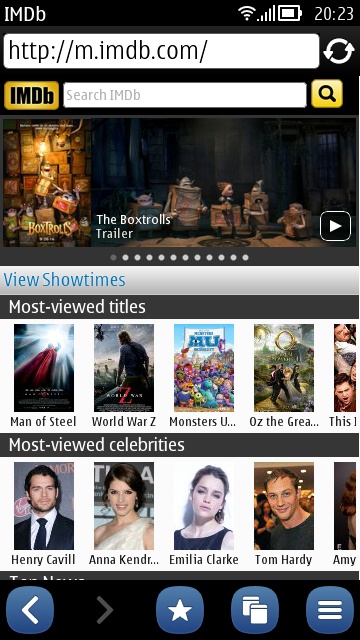 The BBC's Travel/Motorways page - my staple when travelling around the UK and well worth a homescreen shortcut slot! And the IMDB, possibly the glossiest mobile site/app of all. 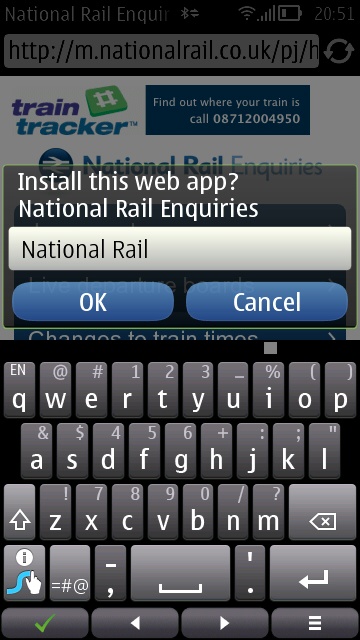 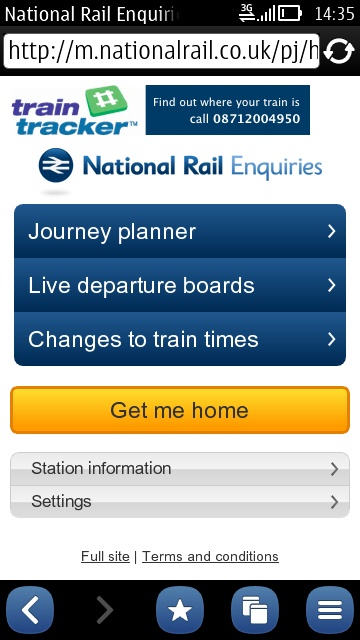 Installing and using the UK National Rail Enquiries service - who the heck needs a proper mobile app when the web site is this clear and useful?

So - are there any other mobile web sites that you've been inspired to put front and centre on your Symbian homescreen(s)? Do share!