How to: Speed your way around applications in Symbian Belle

Most of us have grown up with Symbian. Specifically, in the last five years, we've grown up with S60. Meaning a 'Menu' system of application shortcuts, neatly arranged into folders (a system that iOS and Android are only just now adopting - but that's a rant for another day), plus a homescreen system offering some live info and a handful of favourite shortcuts. Symbian^3 enhanced this by adding extra homescreens, but we now have Symbian Belle coming with a possible six homescreens and no application folders - how does this affect how we use our devices to best effect?

You may remember my infamous little tutorial here: "Sometimes simple is best - using a single homescreen"? This very much went along with the conventional 'S60' system of hierarchical application menus being the principal way of accessing your content and applications. Accompanying this hierarchical menu system there was, traditionally, a 'homescreen', onto which status information appeared, along with a handful of shortcuts to the apps and bookmarks you used the most.

With the arrival of 'widgets', in S60 5th Edition on the Nokia N97, we then had a subtle enhancement of the homescreen concept, with Symbian OS passing control over those six little rectangles to the appropriate applications or functions. Now we had a homescreen that not only showed information, it was extensible and customisable in a way that we'd never seen before (on Symbian).

The idea proved popular and, spurred on by the increasing popularity of 'widgets' on competing Android smartphones, the number of homescreens was increased for Symbian^3 to three. This was a whole new ball game, with an ever larger chunk of smartphone functionality available without ever dirtying your fingers tapping into the main application menus. In fact, it was such a departure that I wrote the aforementioned 'keeping it simple' rant.

However. Burying my head in the sands of time (in this case the past - S60) isn't going to help us all adjust to the brave new world of Symbian Belle, now already in shipping phones and rolling out shortly for all existing Symbian^3 smartphones. Belle increases the number of homescreens to six, adds many different sizes of widgets and (by default) does away with the old hierarchical application menu. In practice, this all represents a huge conceptual change in how you and I can speed around our Symbian smartphones. (And all this is quite separate from the other major changes in Belle, such as the (also Android-like) pull down notifications pane and the new forwards-backwards workflow - subjects for another day; suffice it to say that Belle is very different to anything we've seen before on Symbian.)

Trying to access applications in the old S60 way with the 'flat' (big) list of applications in Belle is an exercise in frustration - queue up perennial scrolling up and down to find the apps you want. One somewhat peverse solution is to create 'New folders' in the flat application list, replicating the old S60 hierarchy (or at least the variant on it that you're most familiar with!) and 'moving' application icons into these as needed. At the same time limiting your use of homescreens to keep things old-school.

But, as I say, this is peverse, requiring a lot of manual work (you'd have to move something like 20 or 30 application icons - at least) just to return to what you're familiar with. A better approach is to work with the new system. Nokia changed to greater homescreen use and to a flat application list in order to be closer to the current 2011 'expectation' of how a smartphone UI should look. Old-timers like me will complain that the old system used to work just fine too, but what's done is done. What matters is how to make the most out of Symbian Belle now that it's here. (And not forgetting that there are many things, both in the UI and under the hood, that make Symbian Belle well worth having.)

Here then, is how Symbian Belle works best, from my perspective...

It's somewhat ironic that, having had hierarchical folder for so many years and with iOS and Android just starting to copy the concept, Symbian has now abandoned folders. Well, not quite. The idea of a flat list was to help new users find apps they are looking for. And, to be honest, even as experienced Symbian die-hards, I bet we've all scratched our heads once in a while looking for 'Recorder' or 'Connection manager'.

The first thing to note is how easy it is to toggle between 'Arrange - A to Z' and 'Arrange - as it was'. Tap the 'More' icon (three stacked lines) and you'll see it on the menu. This alone makes it easy to find an application.

Even easier is to tap the 'Search' icon (magnifying glass) and the list jumps (temporarily) to alphabetic order, along with a pop-up qwerty keyboard. You can then either swipe up to find an application or just type the first couple of letters of its name - the icon list reduces quickly as the letters are quick-matched. E.g. "ph" to find 'Photo editor'. 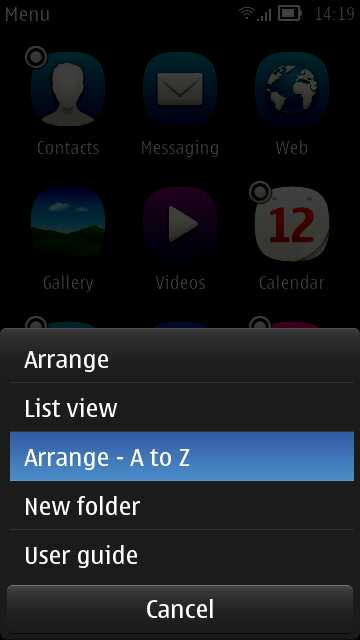 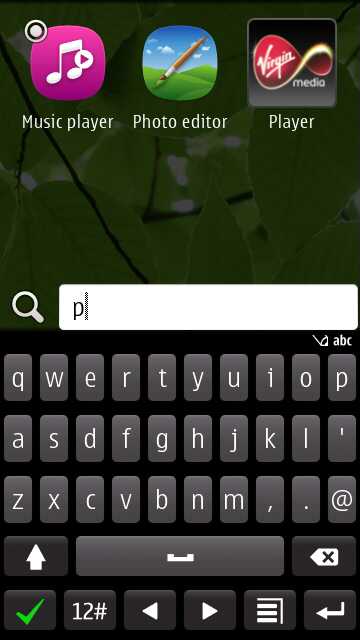 So far so good. If you're like me you'll have half a dozen applications that you use every day and it makes sense to put these on the homescreens (see below) as 'shortcuts', i.e. a tap there and you're in the app. Most of your widgets will also launch through into a specific application, plus Music player and connectivity options are all in the Notification pane (see below), so those are other applications that you don't need to worry about getting to quickly.

What of the main (flat) application list, then? If you wanted to be really reductionist, you'd go through the main list and move applications that we've covered so far into a separate folder, out the way, but that'll cause confusion further down the line when you're in the main list and simply want 'Contacts', for example!

So just shuffle them all out of the way into a dusty corner of the phone. Tap on 'More' and create a 'New folder'. You can then long press on each unwanted icon/app and 'Move to folder', picking your new folder in each case. Rinse and repeat for each and you'll be much happier without those 10 or 20 'rarely used' apps. Your main 'flat' applications list is now a lot shorter, several times more useable and manageable. 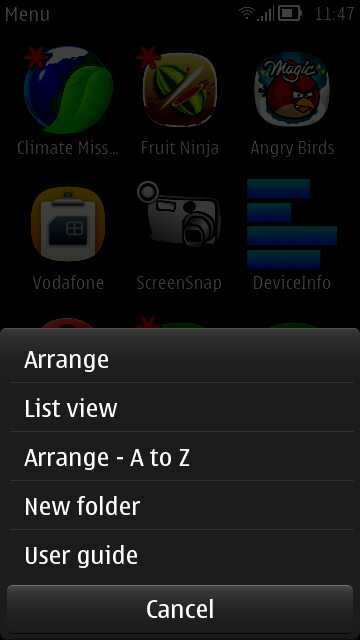 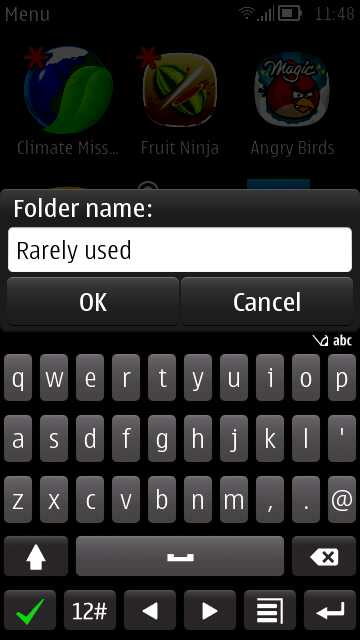 On my test Nokia 700, I ended up with less than 30 icons in the main list (i.e. two and a half screens full), including several third party applications. If you have a few more spare minutes, obvious next steps might be to put all the maps/GPS related applications into a 'Maps' folder, or put all the games together, in each case 'arranging' the folders up near the top of the apps list.

With all this in place, you can now hit the 'Apps' icon on the homescreen toolbar and you'll only be a few centimetres from the next application you need to switch to or to launch. 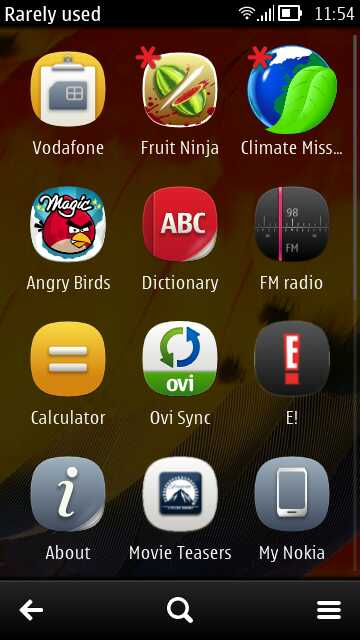 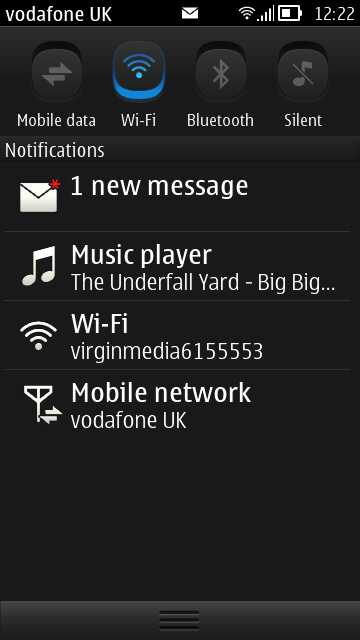 As mentioned above, you don't need to worry about shortcutting Wi-fi management or Settings, because the new Notification pane lets you toggle Wi-fi, mobile data and Bluetooth off and on very easily, from anywhere on the phone. In addition, there's one touch access to the 'Silent' profile and to switch network modes (e.g. to turn off 3G to save battery).

You also don't need to worry about shortcutting 'Profiles' generally, since the old, faithful Symbian shortcut of pressing the power button briefly still gives the choice of changing phone profiles (including 'Offline'). Plus the same menu lets you 'Activate power saving', which does the 3G to 2G trick plus other display and background tweaks to eke out your battery for just a little longer. Switching on power saving when heading into a tube network or another location with known poor network coverage can really make a difference between running out of power before the end of the day and lasting well into day two...

This is going to sound radical, but the very first thing you should do is remove almost all the widgets and shortcuts put on the homescreens by default. In fact, delete most of the homescreens provided. Far better to build up homescreens with bits that you find you need rather than fill the homescreens just 'because you can'. You'll see slightly faster device operation, slightly less data use and slightly better battery life if you keep homescreens and widgets down, especially if they're connected widgets that go online.

In my original article about Symbian^3, I put forward the reasons why I stick with just one homescreen. These reasons are still largely valid, but the slightly increased focus on homescreens in Symbian Belle means that the optimum for most people will be two or three. I've got it down to two on the Nokia 700, as shown here. 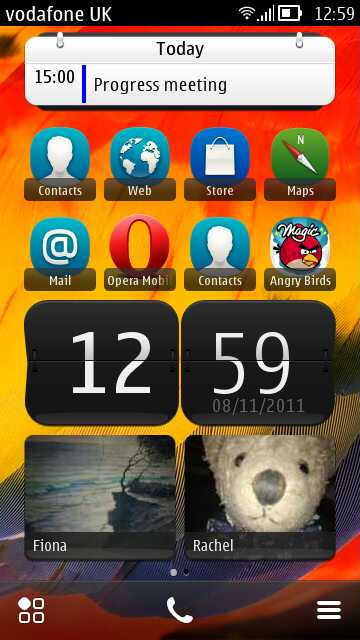 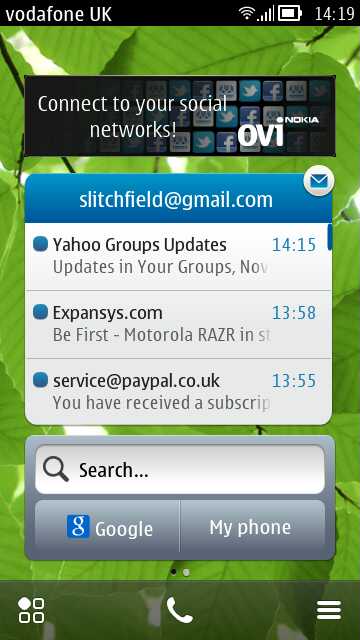 Having five or six homescreens means that you'll be forever swiping left and right to try and find the widgets and icons you need. Far better to keep things as simple as possible.  Homescreen '1' (for me, at least) is focussing on time, calendar and shortcuts to applications and contacts I need all day long (photos replaced by placeholders in the screenshot above for privacy reasons!), while homescreen '2' is where I get 'online', with Facebook and Twitter updates, email and easy access to searching the Internet and phone content.

This is, admittedly, a fairly simple smartphone setup - I can imagine that most people reading this will opt to have at least a third homescreen, fitting on more online and third party widgets and, probably, more contacts. But, again, bear in mind that the more homescreens you add, the more swiping is needed in order to find what you need!

Not to be overlooked is the built-in Symbian multitasking - present since the beginnings of the OS, of course, but very visual since Symbian^3, with live 'previews' of what each running application is up to. When you need another app and you know it's running, it's often faster to press and hold the main 'home'/Menu key and simply pick from the carousel of running applications.

Balancing all the elements above should give you a speedy way to navigate between different applications and data in Symbian Belle. Purists will argue that it's not better, it's just.... different. And they'd be right. But this is 2011, Symbian is trying to 'fit in' to a smartphone market which seems to be wanting to run away from it, and Belle is a nice step away from S60 and the 'one-handed UI' paradigm, and definitely in the direction of the mainstream.

And now you've got a few insights as to how to (hopefully) use it more efficiently.

Steve Litchfield, All About Symbian, 9 November 2011

Filed: Home > Features > How to: Speed your way around applications in Symbian Belle