One of the much-hyped additions to Symbian^3, over S60 5th Edition, was the ability to have multiple homescreens, Android-style. Surely more homescreens are good, surely more widgets are good - or so goes the theory. But I'm not so sure, having lived with the N8 for a month. Here's my Luddite and rather unfashionable perspective on the homescreen phenomenon.

The idea of a homescreen on a phone - or a standby screen, in Nokia's old parlance - was and is to present, at a glance, all the things you really need to know, saving you from going into multiple apps, one at a time, just to see basic information. Which is a great idea if that's how things are left - and assuming you have the screen real estate to show everything that's needed. 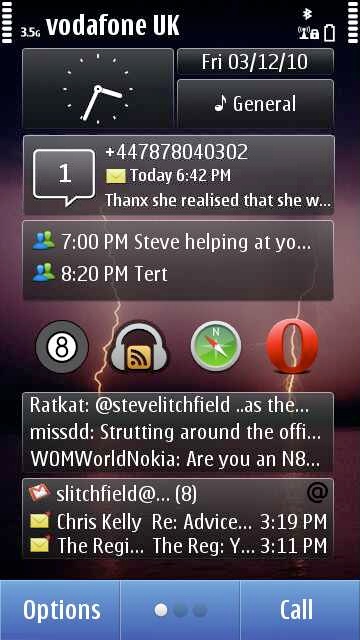 Unfortunately, as is the way with things, programmers got more and more ambitious, deciding that they wanted to present blocks of information that were significantly bigger - and prettier. And, as a result, the concept of multiple homescreens was borne, first seen in Android, with three, and then five, then seven and even nine homescreens, all of which could be filled with widgets and shortcuts and general frippery. Heck, HTC's Sense UI (a layer on top of Android) even enhances this by allowing multiple 'scenes', each of which can comprise a new set of up to nine homescreens.

And even Symbian has now got in on the act, with three homescreens on all the new devices. And even the older Nokia Eseries phones had a 'mode' setting, equivalent to HTC's 'Scenes', for switching between, for example, 'Personal' and 'Business'.

My problem is this - the whole concept of a homescreen was that it would be your 'home'. The one place where everything you really needed to know was gathered. Not a starting place for swiping backwards and forwards multiple times, trying to find the piece of information you're after - you might as well just dive into the main menu and go to the appropriate application.

I've been trying to like the Symbian^3 triplet of homescreens and have utterly failed. I've tried spreading the widgets out, I've tried 'theming' them ('Telephony stuff', 'Internet stuff', 'Media bits', etc) and I've tried prioritising them ('Really important bits', 'Less important bits'...) and so on, to no avail. I'm obviously a simpleton because I've found I function best when there's just one homescreen, one place to glance, one place to land up every single time.

Widgets and icons on other homescreens tend to just get forgotten - in the buzz and busyness of life, I literally don't remember that the other homescreens are there - apart from when I want something that I know they contain and then it's an irritation to have to swipe left - or right - and then find the thing I wanted was on the 'other' (third) homescreen after all.

Is it just me? Am I too old-school? Am I losing my marbles? [Answers on a postcard to Rafe please]

The intriguing question is, given the premise of only being allowed one homescreen, one place for everything that's really important, what should I put on it? Which information is critical and which is not?

Rejected after a few weeks of trial and error were:

I've ended up with the homescreen shown above, right. It gives me everything I really need to know at a single glance and gives me ready access to my most-used functions. From the top, we have:

So there we have my admittedly personal solution for a single homescreen that really does show everything I need in one glance. Beats swiping and scrolling around all over the place, at any rate.... 8-)

Comments welcome. Are you a multiple homescreen person or an 'at a glance' single screen user?

Steve Litchfield, All About Symbian, 3 Dec 2010