The Gotya surveillance application for Symbian has been covered here on AAS before, but I did note a blog post yesterday from the developers pointing out the possible number of available devices for doing home/office surveillance that are possibly sitting in drawers, even (in the hands of Symbian fans) perhaps the 'previous' device. 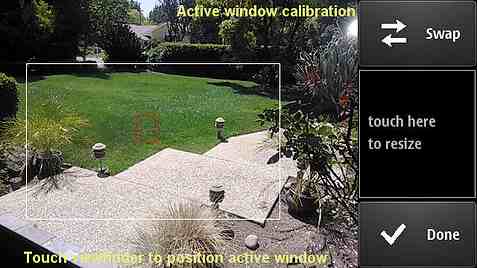 Introducing Gotya, an app (and cloud service) that can be used to turn an old (S60 5th/Symbian^3) Symbian smartphone into a smart motion dectection camera (i.e. take a photo when motion is detected). The same app can then be used, on a different device, to remotely control and monitor the camera on the first device. Combining the two devices with the cloud service essentially forms a basic, remotely accessible, personal surveillance system.

From the Nokia Store description:

Gotya is mobile photo surveillance. Turn your Symbian phones into smart motion detection cameras to capture photos at your house or anyplace you want. Use Gotya app by itself or connect to the Gotya cloud service for remote control of 4 cameras at once, take instant snapshots, auto-upload pictures to Gotya cloud, and get audio, picture and email alerts. Gotya service available on Windows Phone and the Web.

The Gotya cloud service is used to store captured photos online and can be configured to email you an alert when motion is detected, including a link to the picture in the Gotya cloud.

Gotya provides an opportunity to make an old device that is sitting in a drawer useful again (it's also compatible with Windows Phone 7 and 8 in either camera or control capacity), but there's clearly some significant set up required (e.g. leave the app running, provide external power, work out a weatherproof mounting system), but overall it may still be a lot cheaper and easier than buying and installing a dedicated surveillance system from scratch.

The remote controller element of Gotya lets you view not only the captures from the remote camera (on demand), but also change the camera settings (e.g. flash on or off, image quality, motion detection sensitivity, whether to save images to the cloud, whether to play an alert sound, and more). You can add up to four remote cameras (phones) to any account, potentially allowing you to provide coverage of a number of locations, or have multiple camera angles in a single location. The remote control service is also available through a web interface.

The section in bold above (my emphasis) is what the Gotya folks have been waxing lyrical about in the latest blog post:

One of the main reasons we developed Gotya was to enable people all around the world, even where Internet access is expensive and/or slow, to use their old unused smartphones as low-cost and low-bandwidth security/surveillance cameras.

In a region such as North America with high disposable income and affordable and ubiquitous high-speed Internet access, video surveillance apps with their expensive video cameras and constant high bandwidth upstream usage (typically on a user’s home WiFi) are popular because people can afford it there. This is not necessarily the case in emerging markets such as BRIIC (Brazil, Russia, India, Indonesia, China) and it’s for those markets that Gotya was designed for. These markets were always strong Symbian markets, until Symbian was “Osborned” (had its end of life announced in advance)  in February 2011, when Nokia announced their intention to switch to Windows Phone. Nokia shipped the last Symbian device (the 808 Pureview)  in mid-2012.

When we started developing Gotya in early 2013, we knew there were “lots” of Symbian devices that could be used as Gotya cameras – both still in active use and “retired” (no longer used).  Let’s take a look at exactly how many “lots” is.

Even the oldest of the Symbian touch devices (the 5-year old 5800) has a 3MP camera that can capture 1 VGA picture per second, perfectly useful as a motion detection and photo surveillance camera. The best selling Symbian^3 device, the N8 released in Q410 (over 3 years old now), has an 12MP camera and much faster processor than the 5800 and can capture 2-3 VGA pictures per second.

A great reminder, though I'd love to hear from readers who have actually done this - I'd like to see photos and hear of experiences in surviving weather and power challenges, etc.

PS. For the numerically minded, see also my last look at the Symbian 'installed base', back in April 2013, a year ago. I'd estimate that the current 'installed base', as at April 2014, worldwide, is now less than 100 million. Though - cough - that's still a large number! Of course, perhaps 98% of those are being used as 'phones' and not necessarily making use of Symbian smartphone capabilities. The numbers necessarily start getting a bit vague here, not least because you have to define words like 'use' and 'smart'. But, undoubtedly, Gotya is right in assuming that there are a lot of Symbian smartphones 'gathering dust' these days.