In the first (seemingly) of a new series over at My Nokia Blog, 'deaconclgi' has highlighted a long unsung hero of Symbian: its file system and File manager ('Files' on newer phones). With iPhones and Windows Phones not having any user accessible file system, and with many Android phones not coming with a file manager at all, it's a timely reminder of how good Symbian/S60 users have had it over the last ten years. Quotes below.

Symbian. A lot of us have been using Symbian for years now and have become accustomed to its features and while some of those features have been duplicated on other platforms, their implementation may be different from on Symbian. For this article, I would like to talk about Symbian’s standard file manager called Files.

File managers are not exclusive to Symbian and have been and are present in some form on other mobile OSes such as Android, Windows MOBILE, Maemo, Meego and the like. The main difference is that the availability of a file manager may vary from device to device using the SAME OS. For example, on Android, manufacturers (Samsung, HTC..)have picked up the slack and now include a file manager in their custom builds of Android but to my knowledge*, (*correct me if Google has now included a file manager in stock Android) Android still lacks a default, built-in, user accessible file manager.

What that means for users of other OSes is that there isn’t a guarantee that they will have a file manager on every device that they buy. The user may have to search and download any of the free or paid file managers. Some people know how to do this and are willing to do this, others are not, while others see no use for a file manager on a phone in the first place. The other scenario is that an OS (iOS, Windows Phone, others) may not have a file manager in the OS at all or have one with so many restrictions that it barely allows you to manage your files. This brings us back to Files, the standard built-in Symbian file manager: 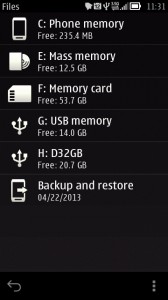 Read on in the full article.

Also interesting was the hundreds of comments posted on the article, with a number of people asking the question "Why on earth would you want a file manager in 2013?" In other words, surely each application will pull in the data it needs without any manual intervention? It's a valid point, not least because iOS and Windows Phone manage without a file system at all.

I'd reply with two points:

It's also worth noting that, for the really technical user, you can go further and install the freeware X-plore, which allows access to a number of parts of the Symbian file system that 'Files' hides (from novice users).