A possible fix for wi-fi dropouts in Symbian smartphones?

The story so far: some Symbian^3/Anna/Belle smartphones have been plagued with Wi-fi dropouts, ruining video streaming and scuppering Podcatcher. I tried to crowd source a fix recently, which gave me some clues, but I wonder if I've now nailed it. Read on for what I did [Update: it's misbehaving again... Move on, nothing to see here?] 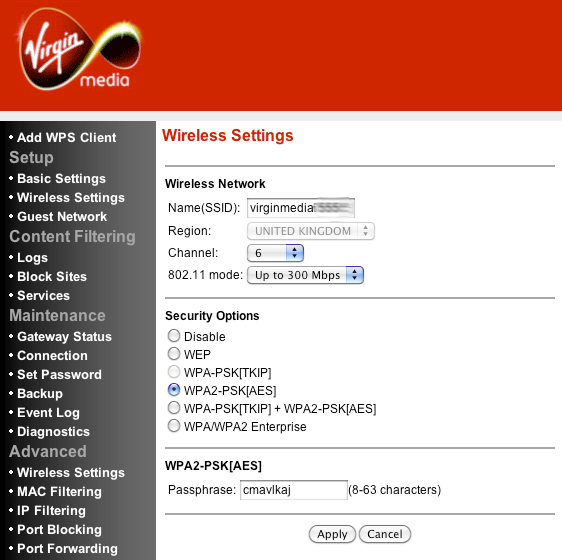 In short, it seemed that Symbian didn't like the so-called 'PSK-mixed' mode beloved of many home wi-fi  routers. This is also shown as 'WPA-PSK(TKIP)+WPA2-PSK(AES)' mode, as shown above.

Essentially, this is a mode which is backwards compatible with devices that are quite old and only have 'WPA' compatibility. With modern smartphones all fully capable of handling WPA2 encryption, I suspected that this compatibility setting wasn't strictly needed. Yet, somehow, I'd not tried the 'AES only' option, shown checked above.

Having changed this setting so that my router was running in pure AES-encrypted mode, I found my Nokia E7, which had previously been almost unuseable on Wi-fi, suddenly became rock solid at downloading large files (e.g. podcasts) and I wonder whether this router change will also help others with N8s and C7s which have been somewhat glitchy on Wi-fi?

To check your own router's settings:

You may find that you also have to turn Wi-fi off and on again on any devices or phones, so that they pick up the new security mode.

Update: after being rock solid for two hours, I restarted the E7 'just in case' and all of a sudden it's as flaky as it ever was on Wi-fi. There's definitely something conflicting between WPA2 encryption and certain Symbian device Wi-fi stacks.... Sigh. Something tells me we'll never get to the bottom of this....