Podcasts and Internet Radio in one application? Ewan checks his GPRS is off, and powers up his Wi-Fi to take Spodtronic for a spin.

One of the big entertainment buzzwords of the moment is podcast and, to a lesser extent, internet radio. Spodtronic aims to hit both, being a third party player that captures and plays both, but there are a number of limitations with it. 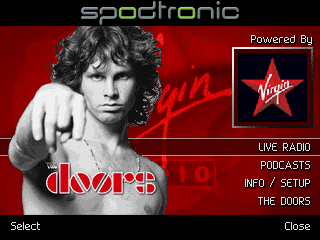 There’s a lot of branding here, mostly for Virgin Radio. And this is, I suspect, because of the business plan that Spodtronic is running. The Symbian client is a closed system – there’s no way to add in your own choice of podcasts or streaming radio stations. You’re limited to what Spodtronic offer. So if I wanted (for example) to listen to the Rafe’s Obscure Cambridge Choral podcast (and if such a podcast doesn’t exist, why not?) I’d have to email the podcast owner and ask them to submit it through the Spodtronic web site before I can find it in their online catalogue.

There is an argument that this reduces the complexity of the application for the benefit of the majority of users, and I can see that. Right up to the point where there isn’t a dialog box (maybe under an 'Advanced' menu card) for you to manually add in a URL for a podcast or audio streaming. I’m all for keeping it simple, but I’m also all for making sure that functionality isn’t sacrificed. 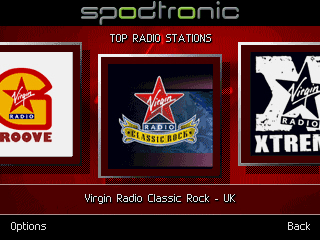 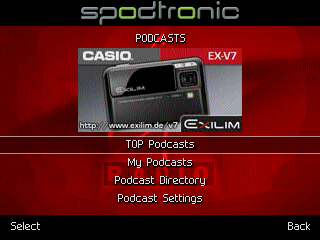 That aside, Spodtronic really does feel as something being presented to you as a 'fait accompli', as opposed to, say, the Nokia Podcasting application that does have the online catalogue but also is flexible enough for you to add your own favourites in. Spodtronic, on the other hand, has branding from Virgin Radio sitting right there on the screen – it lists all the Virgin Radio podcasts first in the subcategories, and the Virgin radio streams first in that section. You get the feeling that something has been put in place between the two companies...

If you put these limitations aside, you have a very nice streaming radio application and podcast player, bundled together. The ease of use in selecting stations and podcasts, either from a ‘top/recommended’ list or from those you’ve selected in the catalogue (which is updated over the air as and when required) is perfect. Album art is used in a scrolling display (reminiscent of Apple’s 'Coverflow', but without the 3D) to navigate through to your chosen media sources. 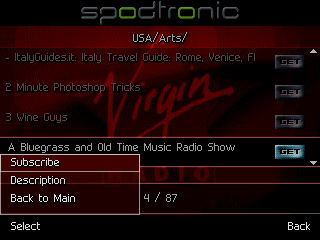 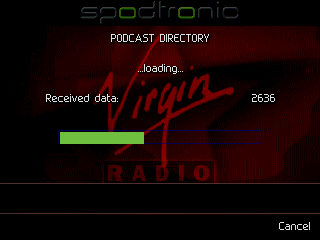 The application is also careful to warn you that you really should be using a flat rate data plan, because podcasts are big (even mobile targeted casts can clock in at 4MB an episode), while streaming radio is just going to be silly on a per megabyte payment plan. Using local Wi-Fi is an option, and one I'd recommend – grab podcasts manually using your home network and then you can make sure that the latest shows are available for you when you leave for work in the morning.

Spodtronic shows promise, but the direction that the developers (Liquid Air Labs GmbH) have taken in terms of branding and content population really does reduce the functionality of this application. If you can live with that, then you’ll enjoy Spodtronic. Personally, I’ll stay with the less flash, but more customisable esenmble of Nokia Podcasting client, Nokia Internet Radio and the built in Visual Radio on the Nseries devices.