Sola Rola is a Java game, and as we all know Java games look cheap and play jerkily, right? Wrong. Read this! 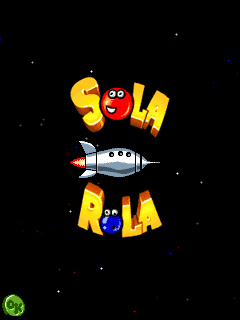 As you may have noticed over the years, All About Symbian has tended to concentrate on native Symbian applications and games rather than stuff that runs through Java. Even though Symbian phones can run Java software, it usually looks much worse and has more restricted functionality than native apps, and this has traditionally been especially visible in gaming. While the best Symbian games look like they've wandered in from a PlayStation, Java games often seemed to resemble something from a Commodore 64. Reviewing Java games felt like a waste of time.

Sola Rola defies all that, largely because it's 2D rather than 3D, featuring some excellent cartoon artwork and animation. This emphasis on talent instead of raw technology means that the game looks really good, and you don't worry at all about its lack of 3D. While it might not have the intricate graphics of a  PSP, Sola Rola is well up to the standards demanded by phone gamers.

Sola Rola stars two alien blobs who through space in a rocket doing various tasks on various planets. Before each mission, you see a brief cutscene that tells you roughly what you have to do, and then one of the blobs is teleported down to the surface. If a new game concept is seen for the first time, especially in the early levels, the game will pause and the other blob will explain exactly what you need to know, so you can jump straight into the game without reading any manuals or help files. All cut scenes, including the explanatory ones, can be skipped by pressing the fast forward button that appears next to a soft key. 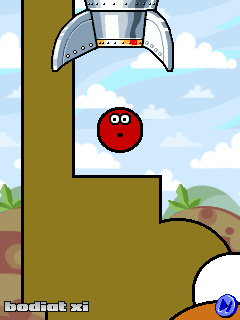 You roll your alien ball around the planet's surface by tilting the landscape left or right with the phone's direction pad, somewhat like the bonus stage in the very first Sonic The Hedgehog game. You can jump by pressing the d-pad button, and your character's body is rather flexible so you can squeeze through even the narrowest gaps. The landscape is also very jelly-like, it may suddenly change shape and parts of it may open up or disappear to let you through. In certain areas you may have to force your way through with a bomb. Occasionally you'll see glowing lava which turns your character to mush, and this must be avoided at all costs, either by jumping over it or swinging from a rope, or even driving across it in a car. Some creatures can also harm you, though they usually don't kill you on first contact.

If you do die, you're simply taken back to the start of that mission. You can also restart a mission at any time by pausing the game and jumping on the rewind pod, and there's also a reset option to restart the entire game. The game automatically saves your progress after completing each mission, so it doesn't matter if you have to kill the app or if your phone's battery runs out.

The cars are an excellent example of the central role that physics plays in this game, as they're basically just two huge boulders attached by a piece of rope, so you have to roll your character between them to make them go forward. If you roll too quickly or if the boulders bounce too much on rough ground, your character will be thrown off and has to get back on the car again. Other objects also rely on simple physics to make complex, interesting gameplay, and simply getting an object from one place to another is something of a challenge when your character is a bouncing ball with no arms or legs. 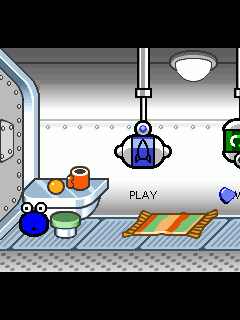 The aim of each mission varies, but it's usually to just reach the end. Some may require you to fetch objects or blow them up, and one mission involves hunting birds by bouncing timebombs up at them from a trampoline at just the right moment (though it's not obvious you have to do that, which adds to the game's charm as the solution dawns on you).

Sola Rola is obviously going to be compared to the PSP game Loco Roco. It has a similar style of rotating background blob-based gameplay, a similar minimalist playing area, and even the name sounds similar. However, Sola Rola has slightly more conventional gameplay, a more conventional plot involving kidnapped aliens, and the banter between the two main characters is much more like the Toejam and Earl games on the Mega Drive. This isn't a surreal game so much as a cartoony one.

It's worth emphasising that despite its console-ish style, Sola Rola has clearly been written with phones in mind: the missions are numerous but bite-sized, their difficulty and complexity increases gradually so that even casual players will feel welcome, and skilled players should be able to finish a single mission in the time it takes to travel to work or school. There's also a playroom which you can access between missions, which lets you try out your skills on a special training level that contains lots of objects, creatures and moving environments. 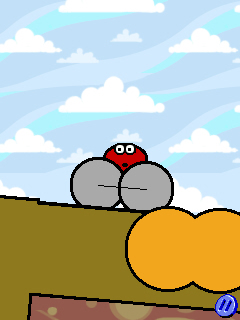 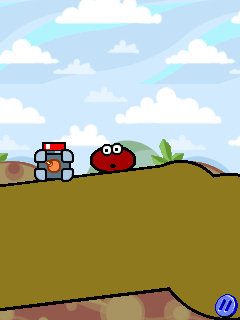 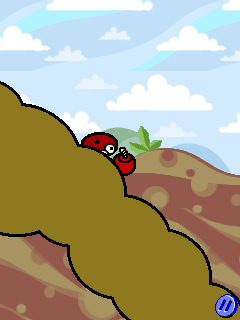 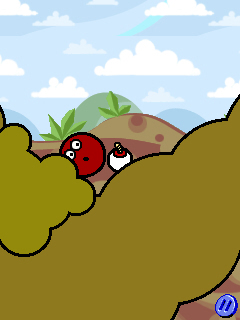 The top left shows the car, and the rest of the pictures show the procedure for dispensing and planting a bomb

You may be looking at the screenshots on this page and wondering if this reviewer has lost their mind, because it all looks so simplistic. But when you actually play the game and notice how it responds, everything seems to flow so smoothly that it looks great. (If you want to see it in action, check out the gameplay video link at the end of this review.)

As noted above, it's not in 3D but it doesn't matter, the artwork and animation mesh perfectly with the style of gameplay and humour of the dialogue. The music is lovely and varied, with different tracks for different kinds of planets, and the planets themselves usually have an overall theme despite the simplicity of the main playing area.

Java games used to have a reputation for being jerky and slow, but Sola Rola (at least on this reviewer's N93) is fast and smooth. The characters, background, objects and explosions look completely unrealistic yet they behave in a surprisingly realistic fashion, and the planets often feel alive themselves as parts of them move about, squishing you between two walls or lifting you above a lava field.

Even the options menu is nice, as you move a blob around your space rocket to collide with pods representing various functions such as volume control etc. 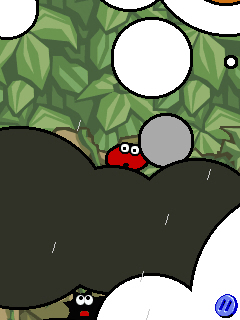 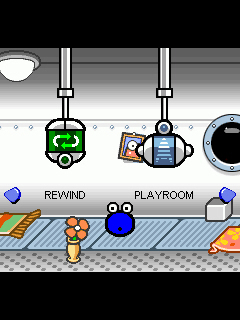 On the left is a level where you can walk through clouds, on the right is part of the options room on your rocket. 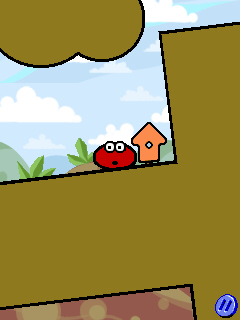 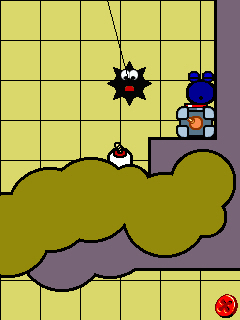 On the left is a lift sign, on the right is the training level.

Sola Rola plays absolutely fine on a television set, and the music sounds brilliant through its speakers. However, the game only works in vertical/portrait mode so it only uses the central portion of the TV screen.

Sola Rola also worked fine with our Bluetooth keyboard, the arrow keys were a good substitute for the direction pad, and the selection button (for jumping) was actually easier to use on the keyboard.

If you buy just one Java game, Sola Rola would be an excellent choice. It's got great, interesting graphics and great, interesting gameplay to match, with some funky tunes in the background. There are 25 missions to get through with a very welcoming learning curve, and it all comes in at just a few euros or pounds depending on where you buy it (Eidos's Finnish site quotes 7 euros). It's superb value.

As with all games, there are a few things that could do with improvement: it would be nice if you could go back to completed missions to replay them instead of having to reset the game, more levels would be welcome, it would be nice to see a landscape QVGA option, and we couldn't get the vibration option to work on our N93. But these are all fairly minor quibbles.

Sola Rola gives you a console-quality game, bite-size phone-friendly missions, and a Java game price tag. It's also something that should appeal to casual gamers as well as hardcore ones. Everyone should give this a whirl, you will almost certainly enjoy it.

We know we already gave out one of our ultra-rare Mega Game awards just a few days ago to Lament Island. However, we really have no choice but to do it again!

PS: You can see a couple of gameplay videos of Sola Rola in action over at the Unofficial Nokia Gaming Blog.

The game reviewed here was the Java J2ME version of Sola Rola. It was reviewed on a Nokia N93. The game works in 240x320 (QVGA portrait) mode, but is also available for many other J2ME-compatible phone models at different resolutions. You can see the official compatibility list by clicking here here (but it seems to be incomplete, as the N95 version worked fine on our N93 which isn't on the list).


You can buy Sola Rola directly from the official Sola Rola site. Just click on the "Buy It" link in the top left hand corner: