Smart Educational Games, like many titles nowadays, tries to offer a quick workout for brains both young and old. But is this exercise really good for you, or is it a waste of time?

A long time ago, instead of buying single board games, it was very common to buy compendia which contained several different games in one box. CrazySoft seems to be reviving this tradition with their smartphone suite Smart Educational Games, aka Smart Games. 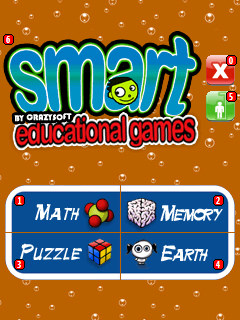 Smart Games is basically four games in one: Math (obviously some spelling problems there ;-) ), Memory, Puzzle and Earth. All of the games except Earth are available in two modes, for children and for adults, and this mode is set on the title screen by pressing 5.

All of the games and menus run under an intuitive and well-implemented keypad system, where you press the number next to a particular icon to access its function. For example pressing 0 (next to a red X or blue backwards arrow) always exits or goes back. Each gameplay screen contains a row of four icons at the top that have everything you need: Mute, High Scores, Restart Game (which also changes the picture or background) and Exit.

Here are the actual games one by one:

Math (yes, that's Maths to those of us who speak English english) is a sort of Space Invaders clone where you have to choose which alien to shoot based on whether its sum, multiplication or division matches the number currently on your craft. For example if your craft says 4, you could shoot aliens with 2+2 written on them.

Memory is that good old memory game, where you have to match pairs of tiles on a grid by looking at just two at a time. The adult mode (with more tiles) matches pairs of animals, while the simpler child mode matches pairs of fruit and vegetables. The quicker you complete the grid, the higher up the score board you go.

Puzzle is one of those sliding plastic puzzles where you have to unscramble a picture by moving one tile at a time into an adjacent space. There are five different pictures to solve, all of which are rather amusing.

Earth is basically a geography test, where you have to match names to particular countries (states in the case of the USA) on a map of a particular region, or alternatively you can match capitals instead. You're given the name or capital to match, and then you have to select a country by number from the map. This is where we run into the biggest design flaw in the entire game: considering that almost all phones have a keypad, one would think that the logical way to input a number would be through the keypad. Alternatively, they might have let people jump to the country they wanted using the d-pad and a jumping cursor. Instead, we have to tediously scroll through a list of numbers with the direction pad, and do this 30 or 40 times until we've named every country in a region. 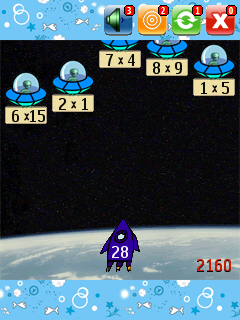 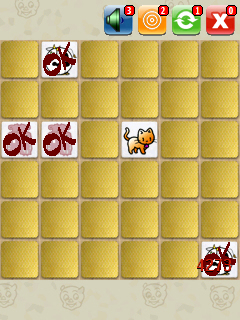 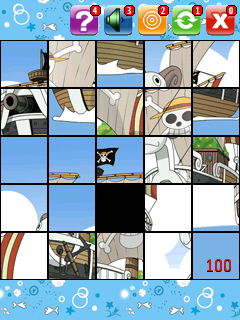 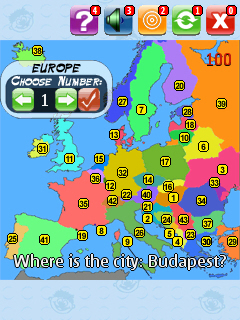 There's not really much to say about the graphics on Smart Games, they're neat and tidy, very functional, but nothing special. Perhaps best is the cute artwork on the Puzzle game, and all the games have a very nice touch where you can select an icon for your place on the high score instead of entering a name. This saves time, and is especially good for young children who cannot read but are old enough to play some of the games.

The sound is virtually non-existent, with a few clicks and other forgettable spot effects here and there, but no music.

Smart Games worked fine on a television, and the Puzzle game artwork looked especially good on a big screen. The Earth game was actually more playable on a TV because it was easier to see the numbers assigned to each country. It actually makes quite a good case for releasing party games for smartphones with TV Out features.

Our Bluetooth keyboard didn't work properly with Smart Games. For some reason the game's controls were very jerky and unresponsive, and pressing a button in the game only produced a response 3 or 4 seconds later, which was very frustrating.

Smart Games is possibly best recommended for people with young children who want something to keep them occupied during a long car or train journey. The maths game really does get you thinking about mental arithmetic so there's definitely an educational angle, and learning the locations of the world's countries and capitals is beneficial to children and adults alike.

The most challenging game for adults is Earth, it's genuinely difficult even for well-educated people to name the capital of the Former Yugoslav Republic Of Macedonia, or say exactly where every country in Africa is, but this has been ruined by a rather tedious scrolling number entry system.

The obvious inspiration for releasing this game is the huge success of Nintendo's Brain Training series, but the crucial thing about Brain Training is that it assesses your performance over time. Smart Games contains no such feature.

But perhaps the biggest problem with Smart Games is the price: 14 euros is pretty expensive by phone or smartphone standards, and there isn't really anything to justify paying such a premium. Even CrazySoft's own far more complex adventure game The Final Battle costs 14 euros. Smart Games really ought to be a budget title.

PS: You can see a gameplay video of Smart Educational Games in action over on the Unofficial Nokia Gaming Blog.

The game reviewed here was the Symbian S60 3rd Edition version of Smart Educational Games. It was reviewed on a Nokia N93. The game works in both 240x320 (QVGA portrait) mode and 320x240 (QVGA landscape) mode.

You can buy Smart Educational Games for the following Symbian platforms, simply click on the appropriate platform to go to the purchase and download page: