Steve Litchfield gets to grips with the first version of Opera Mini that will work for everyone. And he means everyone. This proxy-based browser solution should benefit people with any PDA or smartphone in any country in the world. And all for free.

The idea of using a 'proxy', a web server somewhere else in the world that takes your requests and optimises the results for your device, isn't totally new. There have been several attempts at this in the wider PDA world, without it ever really taking off. Instead, many manufacturers and developers seem to want to cling to the 'try to display a page as closely as possible to a desktop view', even though a page designed for a 1200 pixel wide PC screen is never going to be practical on a PDA or smartphone, even with the 640 pixel width of the Nokia Communicator.

Enter Opera, who'd toyed with using proxy-based compression in their Opera Mobile Accelerator product, designed to compress HTML pages during transmission and expand them on the device. This wasn't terribly successful for many pages, usually because the size of the HTML wasn't the largest factor in page load times. In addition, the full byte count for each page was still transmitted, even if the smartphone had no use for acres of Javascript, Flash and the like. With Opera Mini (a free Java-based application), they've gone all out to put as much processing power as possible on the proxy server. Essentially, you open your next link or type in your next URL and the server grabs it and all its code and images, decides which bits you don't need and sends over just the bits you do. 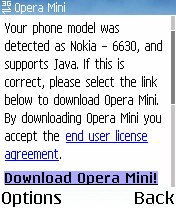 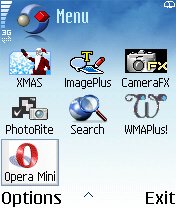 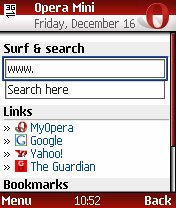 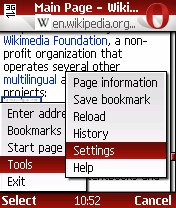 The benefit for you and I is that pages load faster (even allowing for up to 10 seconds a time while the proxy goes off and grabs each page for processing) and that the hit on your GPRS bill is drastically reduced. For example, 300K of CNN.com's front page was reduced to just 30K when downloaded and viewed in Opera Mini. That's a serious saving. I tried out a few online shopping and banking sites and each seemed to be perfectly usable in Opera Mini, which was impressive, considering the three way connection via the proxy server. Not every site will work perfectly, though, I couldn't bring up Microsoft's front page, but then that may have been intentional by the Opera crowd....!

To get started with Opera Mini, you just go to mini.opera.com and the server auto-detects your device and gives you the right download link. Installation is very quick, as it's only a 100K application (remember that most of the processing power is back in Scandinavia, in Opera's proxy server). The Series 60 version needs around 4.5MB of RAM free, which should be practical on most devices; the Series 80 (Nokia 9500/9300) version needs around 7.5MB free, which is even less of a problem, though still significant if you're in the habit of leaving memory-hungry games open.

The interface is identical on all devices, this being essentially the same Java application. The first 'soft' key brings up a fairly short menu, with the usual browser functions, and the last 'soft' key cancels the current action or takes you back to where you were. Opera Mini is fairly intuitive, even though it doesn't really follow any Symbian UI guidelines. There's a UIQ version too, and this will also work on other, non-Symbian, PDAs and smartphones, so they're covering all bases here.

I liked the bookmark and history functions, even if navigating around Opera Mini is slightly more keypress intensive than I'm used to. There's a set of ten numeric key shortcuts (used with the '#' key) for the most common functions, although it will take a while before these get learned. 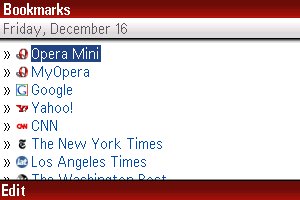 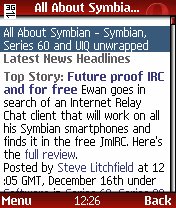 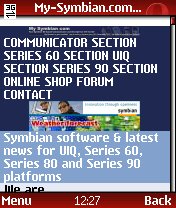 Opera Mini has so far only been officially 'available' in a handful of countries, because Opera wanted to test their servers before letting it loose on the wider world. But with typical AAS doggedness(!), I found out that Opera has now silently removed the geographical restrictions to the Opera Mini download site, to allow for more traffic as they are scaling up for a full-fledged global launch in the new year. Standard phone users (assuming their handsets are up to it) won't find out about Opera Mini until their network operator tells them about it, but geeks everywhere (that's us, by the way) can get full use right away.

I really, really hope that Opera Mini survives and prospers - it's about time we all had a really good proxy solution in the smartphone world. In use, it changes the way you browse, the sign of a killer application. Rather than consciously limiting yourself to just smartphone-friendly sites, you can confidently call up ANY page, however daunting, confident in the knowledge that you'll only have to pay for the GPRS bytes you actually need.