Hexxagon Labs is a less than a week old version of an ancient board game of the Othello and Reversi school of multiplayer timewasters. It would be very easy to dismiss this style as a “kid's game” but if you take into consideration that there is an annual World Othello Championship since 1977 where every country can represent themselves with a maximum number of three players, than it's a whole different ball game. Er... I mean board game. 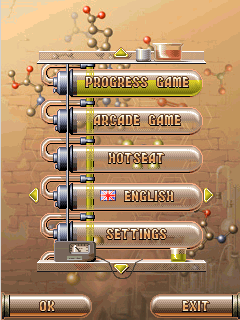 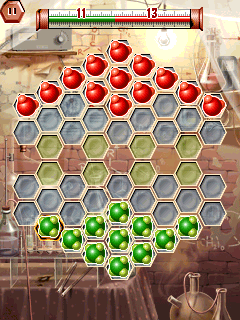 Yes, you guessed it right: it’s one of those “easy to learn, but hard to master” kind of games. The rules are really simple: two (or three) players start filling up a pre-defined board with their colours by making steps into empty cells not more than two cells away from the current position. If you step to an adjacent position, the number of occupied cells increases by one, if you jump over an adjacent cell, you move (instead of copy) your colour. The twist is that whenever you occupy a new cell, all the adjacent occupied cells change into your colour. The goal is to make sure that when there are no more available moves (the whole board is filled), yours is the colour that paints the highest number of cells.

Unlike Othello, Hexxagon Labs has hexagonal cells instead of squares. It gives you a lot more manoeuvrability, since you can move to any of six directions and not just four. Herocraft also added a little spice to this age old recipe by creating 17 different gaming boards with holes placed at different strategic positions, all requiring slightly different tactics than a plain completely-filled-up field. As you play through these various boards, the difficulty increases at the same rate as your experience. Every board is harder to master than the previous one and, by the time you are half way through the lot, you might end up losing more often than winning in your first few attempts to defeat your opponent.

After finishing this 'Progress Mode', you can re-play all the boards you have unlocked in the instant 'Arcade Mode' and try to beat your previous records. The third game mode is 'Hot Seat', which gives you the opportunity to challenge your friends on the same phone and see if you can defeat a real life player as easily as an artificial intelligence.

No two games are the same, if you choose to make a move differently to the last time, the computer will respond accordingly, so there is no “correct solution” or one certain way to win a match. It mostly depends on your ability to pre-calculate possible situations and not miss any vital counter-attacks. One cute additional feature is that before and after every game, a randomly picked short scientific fact from the world of physics, mathematics, chemistry and other subjects is presented, so you can even learn a few new things if you take the time to read those snippets.

The game’s presentation is very, very stylish. The cleverly animated menu, plus the slightly transparent multi-coloured cells with the diverse set of backgrounds will all give a very pleasant visual impression, which goes very well with the chosen collection of background music tracks and unintrusive sound effects.

Hexxagon Labs is not perfect, there are a few minor details that will make a possible next version a more mature piece of software, but it is a nice distraction for a few hours. A bit more of an informative board selection screen would help, i.e. which board is two player, which is three; current score is shown and then compared to the possible maximum of that board, etc. Also needed are adjustable difficulty, statistics for multiplayer games, more variety in boards (certain cells worth more points than others, moving cells, etc) or further game modes (you have to capture certain cells to win, etc). 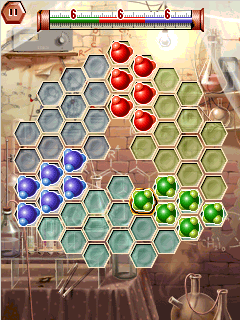 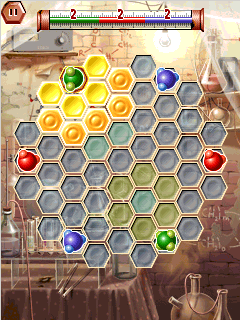 A good old favourite in new clothes – that is what Hexxagon Labs seems at first glance and this stays for the fifth hour of playing time as well. With 17 levels, it’s not a big game, but if you have friends or family to challenge in a quick game of cell-capture, there is plenty of replay value.

Attila Katona, All About Symbian