4 In A Line, also known as Connect 4 or Captain's Mistress, is a well-known game where you drop discs into a vertical board. Can it make a successful transition to mobile phones? Find out in AAS's review. 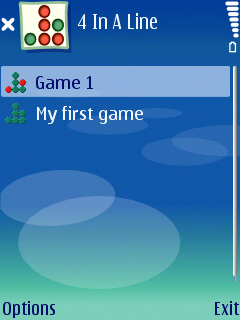 4 In A Line is a traditional board game which is probably better known today under the trademark name Connect 4. You drop discs into a vertical frame, and the first to make a line of four horizontally, diagonally or vertically is the winner.

Four In A Line is very quick and easy to pick up and play: the rules are simple and the games end quite quickly whether you win or lose. It's useful for filling in even short amounts of time, which is always good in a phone game.

ZingMagic have used their usual interface that allows you to play multiple games against multiple opponents at once, and come back to the games at any time. People familiar with their other board games should be instantly at home here.

When first approaching this game, this reviewer assumed that it was just a few steps removed from Noughts & Crosses (Tic-Tac-Toe to American readers), one of those simple pastimes that people only find interesting for a short while in their early years.

However, as with most ZingMagic games, they've clearly spent longer on the AI than anything else. Putting the game's AI on maximum showed how wrong it was to think the game would be a pushover, as it's actually quite hard to consistently defeat the most powerful opponent. Though you may well topple them on a regular basis, in reality they will defeat you just as regularly if not more often, and it's always an "Ohhh, why didn't I see that coming?" moment when you notice where their line of four came from. This is important because it convinces you that you could win the next game very easily, and you have another go.

If you're the kind of person who likes to home in on strategic mistakes, you can review a game afterwards one move at a time, and you can also undo moves during a game. And for those who can't be bothered, there's also a hint system that suggests a good next move.

If you do find the Expert opponent overwhelmingly difficult, there are five less challenging settings, and you can also play against a human being either by passing the phone to them, or via Bluetooth on another phone, or even via SMS text message. You may want to check the price of texts on your network before choosing that option though as there may be as many as 30 or 40 moves in a game.

This isn't really the kind of game you'd buy for the graphics, as the board is as simple as they come: 42 holes and two sets of coloured discs. There are options to change the colours of the background, board and discs, but that's about as far as the spectacle goes.

One thing definitely worth noting though is that the graphics have been tailored to work on all resolutions of S60 3rd Edition, so there's no need to worry if you have a model with a slightly less common resolution.

There's no sound at all except for a bleep when a game ends. 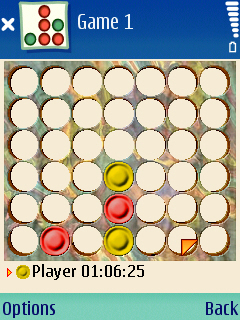 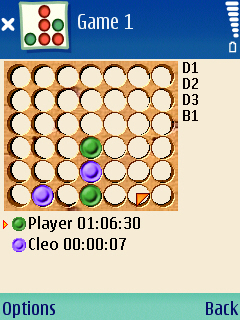 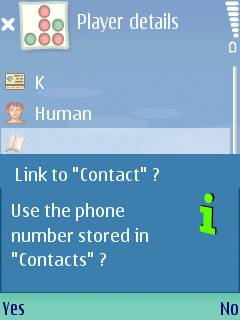 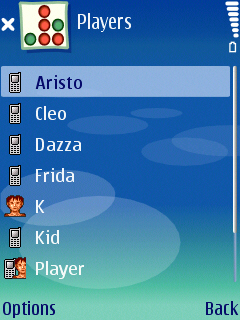 4 In A Line works fine on a television set, no problems at all. The graphics don't look any worse than on a phone screen.

The keyboard controls also work fine, as all you have to do is press left or right and the select button to drop a disc.

This reviewer started out with fairly low expectations from 4 In A Line, purely because the game it is based on seemed too simple to warrant a smartphone version. However, once you realise just how tricky the top ranking AI opponent can be, it can be quite addictive to try and beat them after suffering a defeat. The game seems so easy to beat but isn't, and that's where its appeal lies.

ZingMagic have put together another solid conversion for smartphones. Perhaps the main thing really missing is a statistics option, as it would be nice to know whether you're generally winning against a tough opponent.

PS: You can see a gameplay video of 4 In A Line in action over on the Unofficial Nokia Gaming Blog.

The game reviewed here is the S60 3rd Edition version of 4 In A Line. It was reviewed on a Nokia N93. It works in all S60 3rd Edition screen resolutions. It is also available for other Symbian platforms including UIQ3, UIQ2, S60 1st/2nd Edition and Series 80.

You can buy 4 In A Line at the links below, just click on the version you want to be taken to its download and purchase page: