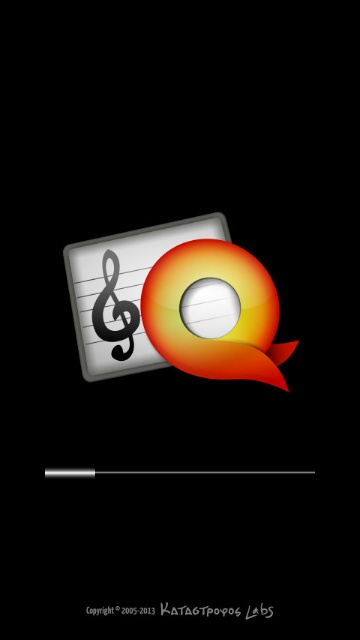 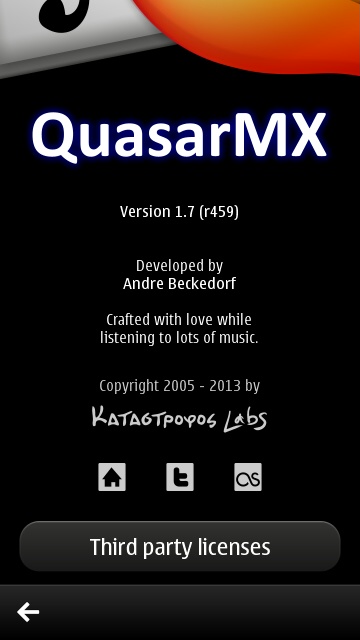 The story goes that Symbian and Meego fan - and, happily, Qt programmer - Andre Beckedorf liked listening to music. A lot. And, however good Symbian's music player might be, it wasn't anywhere near good enough for him. He wanted, and here I quote from the official QuasarMX feature list:

It's true we've seen a few of these features in add-on utilities before, but never has someone attempted to put all this into one application. Well, Andre has succeeded and QuasarMX (which came out of beta for the first time in January) is a work of relative maturity, (almost) all screens and dialogs are pixel perfect (Qt's components sometimes get in the way - witness the main options menu, which looks complete but is in fact scrollable) and the core music playback is excellent. Even the gapless playback is close to living up to its name.

QuasarMX scans your music folders on its first run (and, as with Music Player, you can re-scan at will via a menu option), this takes about as long as for the Symbian music application, producing a summary of genres, artists and albums found, as shown here. The ticks can be applied to add/filter items into your default playlist - there's support for multiple playlists, but I've always been a 'one album at a time' person, so I haven't explored these functions in detail. See the bottom of this review for details of a trial version of the application, where you can try everything out for yourself. 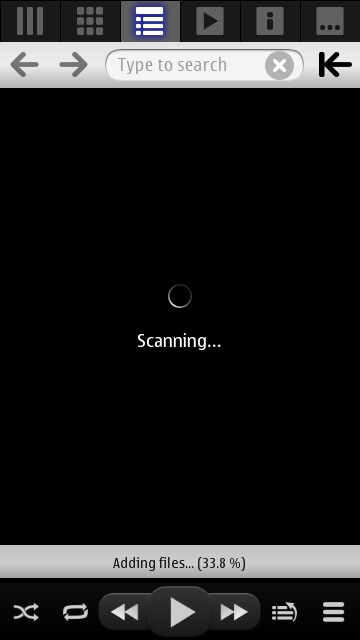 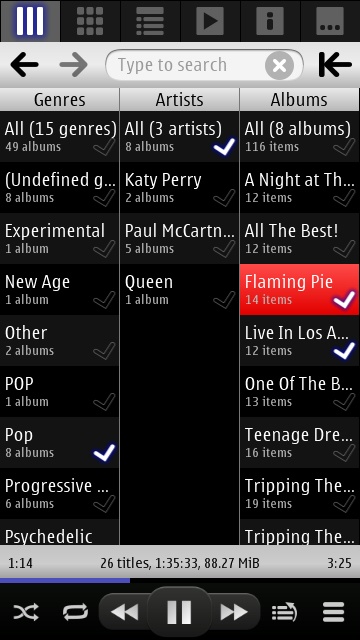 The first of the six tabs, then, is the playlist construction area, while the second shows the current playlist in graphical (i.e. cover art) form. At any point you can type in the search bar to find a particular track or artist. And, as the play controls at the bottom of the screen suggests, you can do all this while music plays.

The third tab, shown below, is for details of the current track and where it sits in the current album or playlist. I'm an album guy, as I said, so here I'm playing through Pink Floyd's 1973 masterpiece... 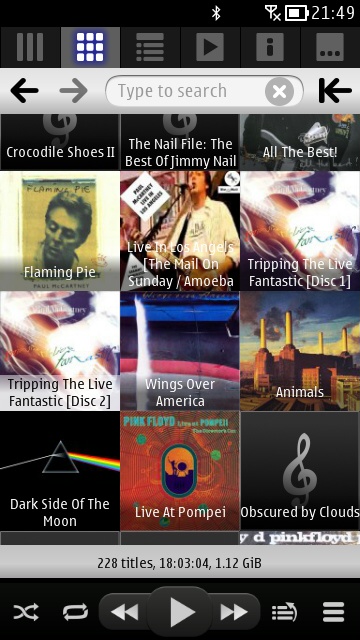 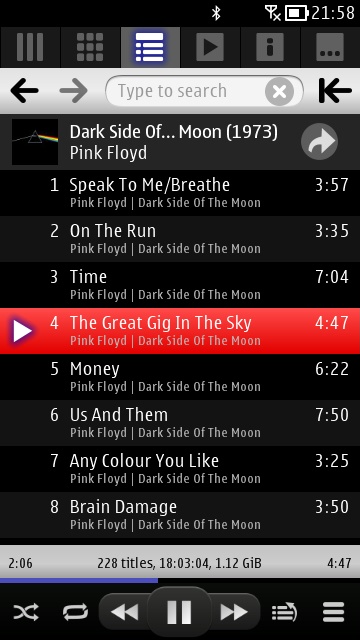 Anyone familiar with "Dark Side of the Moon" will know that, like most live albums, there's no gap between songs, i.e. they flow seamlessly into each other in terms of audio. In the Symbian default Music Player, there's a second's gap (of silence) when one track finishes and before the next one starts, which can be jarring. QuasarMX claims to offer 'gapless' playback, though it's turned off by default (presumably because the majority of albums aren't designed to flow in this way?).

I turned 'Gapless playback' on in the settings pane and then listened through the album - playback isn't truly gapless in QuasarMX, in that there's still a very tiny silent blip, but it's of the order of a tenth of a second and is worlds more palatable than the behaviour of the default Symbian player. According to the developer, this blip is caused by there being a tiny bit of silence on the end/beginning of the tracks themselves and he's planning an algorithm to remove the effects of this in a future version. 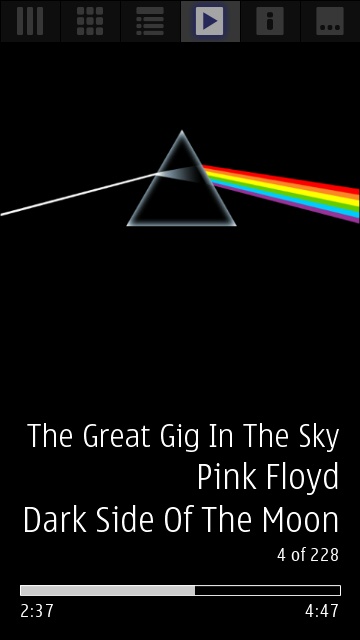 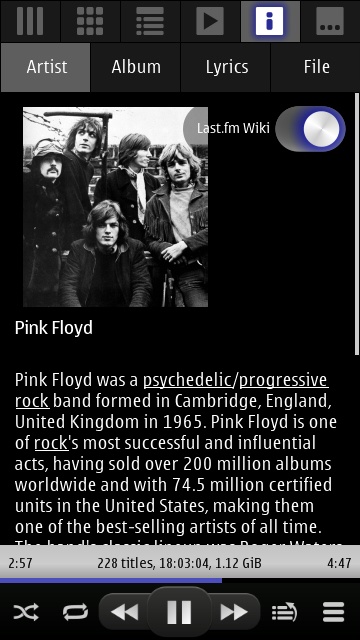 Onto the fourth tab then, with a dedicated cover art playback screen, looking especially stunning with the black artwork for "Dark Side" on the AMOLED screen of the test phone. The top tab icons fade to black during playback, too, very artfully, ensuring that nothing gets in the way of enjoying the art. While you can tap to advance playback during a track in the other views, the playback bar can't be interacted with in this view. (By default anyway, there's a setting to enable this if you need it.)

Tapping on (or swiping to - you can swipe between all of these screens, side to side, Meego or [dare I say it] Windows Phone style) the fifth tab gives information, and lots of it. There are toggle switches to turn on each of artist, album and lyric displays (because each uses data to retrieve what it needs from Internet services), but each works well, as shown above and below. There's no lyric tracking (by time code), it's just a scrollable display, but it's still extremely handy. 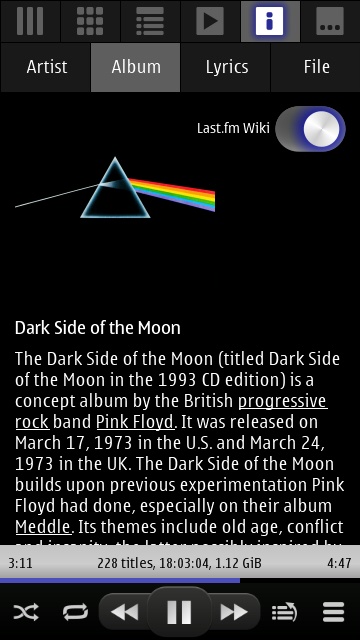 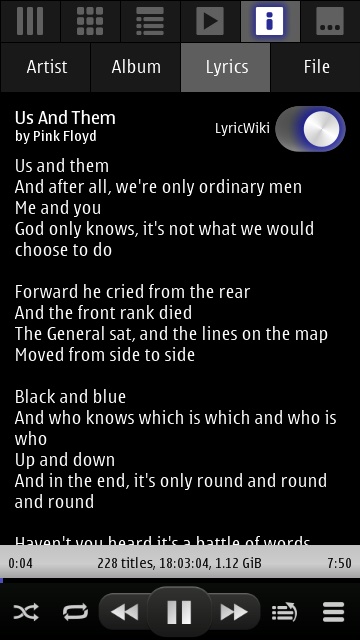 Also available is the file view below, showing the vital stats of each track, in this case an iTunes AAC-encoded song at 128kbps.

Finally we get to where much of QuasarMX's exciting functionality lives, the mysterious "..." sixth tab, effectively two utilities and a terrific settings pane. First up is a fully working cover art downloader, using a custom, open source service of the developer's making. It took around a minute to grab art for the 45 albums I had loaded on the test phone, which seems quite reasonable, especially since some of the artwork is relatively high resolution.

Obviously, if you subsequently add more music to your phone and re-scan the folders to pick up the tracks then you'll also need to re-run the cover art downloader function if you want to fill in any more gaps. 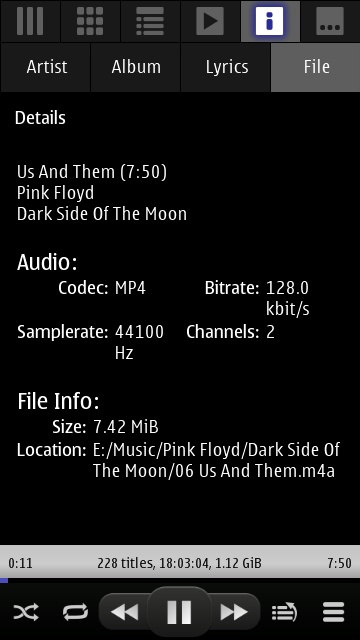 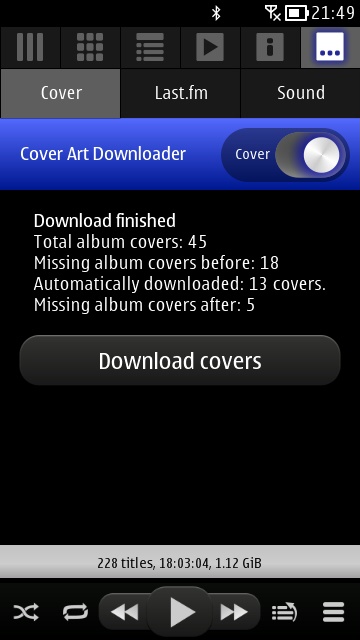 The Last.fm sub-tab is for 'scrobbling' - sending details of what you're listening to the Last.fm service, for onward sharing and for building up a list of what you've heard - I've never used this service, preferring to keep my somewhat quirky listening private, but the facility is here if you need it...

Now we get to perhaps the most exciting part of QuasarMX, its real time audio processing. The very fact that 'gapless' playback is attempted gives a clue that QuasarMX is handling the audio stream in real time (so 'gapless' here involves a degree of buffering both the current and next tracks and trying to splice them 'on the fly').

The 'Volume Amplifier' is very useful - I'm sure we all have tracks or podcasts on our phones where they're simply too quietly (and amateurishly) recorded to be heard properly, even on in-ear headphones, if you're not in a quiet room. The amp system here means that you can wind the volume up to suit, effectively magnifying the processed audio waveforms. The danger with doing so (apart from to your ears!) is that if you amplify digital sound beyond '100%' you get 'clipping', i.e. unpleasant distortion. QuasarMX thus also comes with an optional 'anti-clip' system wherein it monitors the waveform of each upcoming second (or so) of music in real time and auto-adjusts the volume back downwards to keep the waveform within bounds and to protect your listening experience. 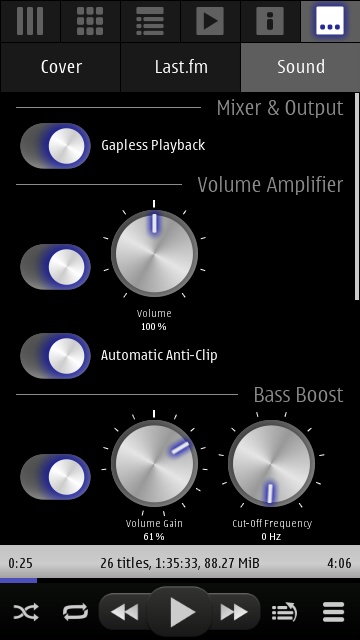 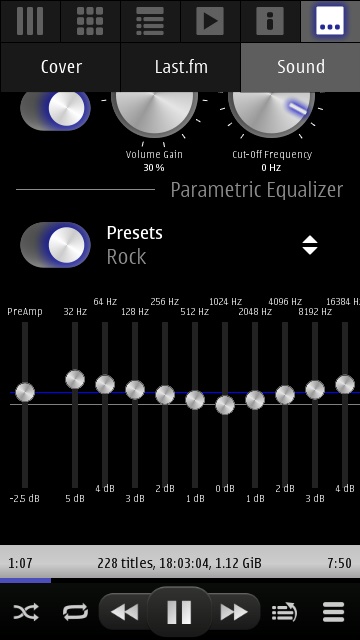 Effectively, this means that you can wind up the volume to hear a quiet track in your playlist and then when Led Zeppelin comes on next, the volume will auto adjust down to safer and more bearable levels.

Also present are treble and boost options, with parametric controls to shape their operation - I found these over-fiddly, both in how the controls 'turn' and in not really knowing what I was doing in terms of cut-off frequencies. You might want to leave these 'boosts' off most of the time?

The traditional parametric 10-band equaliser is more familiar, with half a dozen presets and full control over how each frequency range should be handled. There's also a pre-amp, which seems to control how much of the output audio goes through the equaliser system. Clever stuff.

I'd decree all this to be a bit over the top, but there are no '3D'/stereo widening options, something which has taken off on other platforms in recent years - I'd have thought this would be quite easy to implement, given the amount of processing already being taken onboard - something for a new version to add? 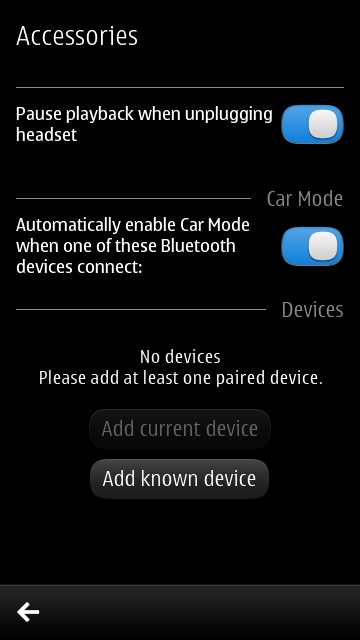 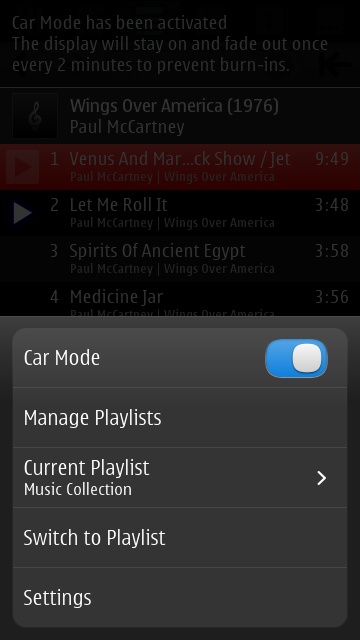 I'll draw to close here - 1400 words on a music player already seems a bit excessive, but there's a lot in QuasarMX that's worth showing off. As shown above, there are options to copy the default Symbian behaviour of pausing when unplugging headphones, plus a simpler 'car mode' that can also be automated when hooking up a Bluetooth headset or car kit, though there's not room to get into that here - go try it for yourself.

Yes, try it. QuasarMX is commercial software at £4 (a sensible price, in my view, that's bearable and yet rewards the developer adequately), as reviewed here, but there's also a 'Lite' version, which has all of the full version's features but in a trial mode:

You can unlock each of these 3 times each for 4 hours, for extensive testing. After the trial period you can carry on using QuasarMX for general playback, including its cover art and informational views, but you'll lose the real time audio functions listed above.

QuasarMX is clearly a labour of love and it shows. Highly recommended for anyone who's serious about their music collection on a Symbian handset.