Calling all Massively Multiplayer Online Role Playing Game (MMORPG) fans. As unlikely as a phone-based MMORPG sounds, that's exactly what Warspear Online is, and is available for Symbian no less. If you enjoy the swords and sorcery type of world that has been made iconic in recent years by the likes of World of Warcraft and Runescape, then Warspear Online could be your cup of tea - or should that be Mana potion?

Notice: Warspear Online would not work with our screenshot software and so the images shown in this review are taken from http://warspear-online.com/en/screenshots and are not of the Symbian version of this game.

For those not familiar with role playing games, and not just the electronic kind, you begin by "rolling" your character, and Warspear Online is no different. There are the usual steps of first selecting a race, and as ever, they have differing relationships with each other, so picking a race not only determines your character's qualities but also who is friend and foe to you too. Once the race is selected, you then pick a combat class. Each class has a different emphasis, Paladin's have the greatest defensive capability, while Mages are about attacking power and long range strikes, while priests are primarily there as healers for other players. To finish off your character, you can select hairstyles, hair colour, clothing colour and gender to make an individual looking hero. 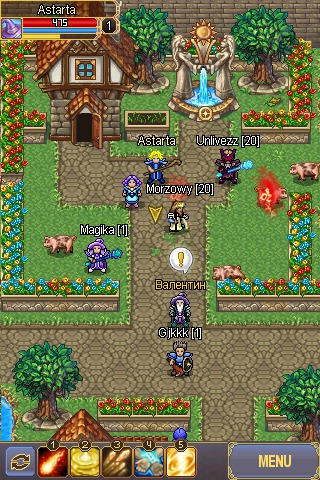 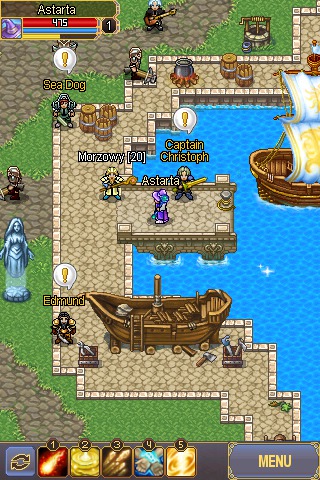 As with any MMORPG, you begin your life in a very safe city area of the game. There you can talk to all manner of computer generated folk who will give you quests. In the course of doing these quests, not only do you earn experience points and rewards, but you slowly learn how to control your character, and more generally how the game mechanics work. 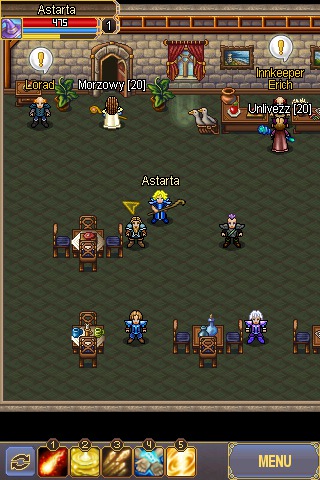 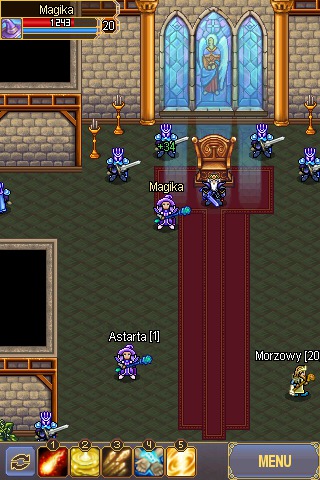 One oddity is that, while setting up one's character, if the phone is turned into landscape mode, the game complains that it does not support landscape mode, despite changing its orientation anyway. However, turning the phone into landscape is essential while actually playing the game. Along the bottom of the screen there is a series of boxes to which particular character abilities are assigned. The user interface is such that only the first three of eight are shown in portrait orientation, so the phone needs to be in landscape to show all of them. 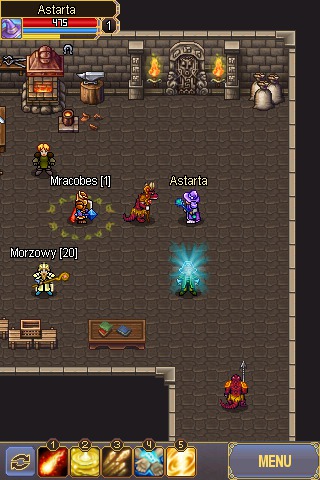 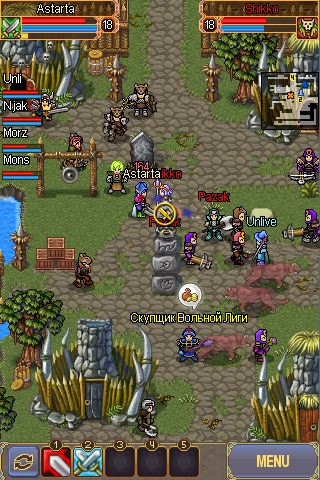 Unfortunately, the relatively low screen resolution of Symbian really shows its shortcomings with a game such as this. MMORGPs (necessarily) have complicated user interfaces that need plenty of real estate that just isn't there on a 640x360 display.

Moving around the game world is achieved by tapping on the screen, doing so will make your character walk to where you tapped. Tapping is also used to select interactive objects, such as combat targets, or non-player characters (NPCs). This 'tap to walk' method makes for a fairly stilted experience though. 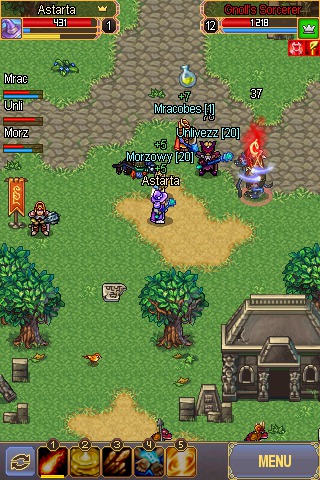 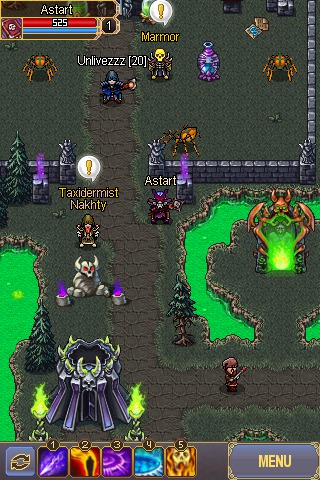 Navigating the game world is something of a slow process, as only small areas are loaded at a time, and moving to a neighbouring section entails you tapping away until you get to the edge, and then waiting for the next part to load.

There is a game world map, but you still have to explore as the map only shows areas you've already visited. Some of the many items indicated on the map are special statues where you will be resurrected if you die – and believe me, you will. This aspect can be quite frustrating if you keep dying far away from a resurrection statue, meaning that you have to walk all the way back to where you were before you died. 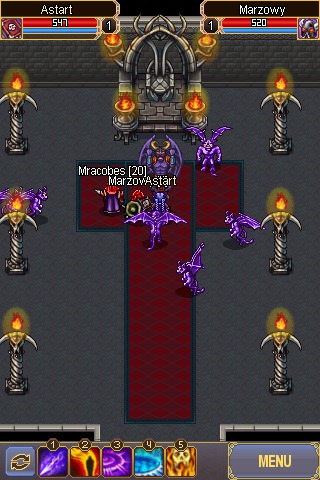 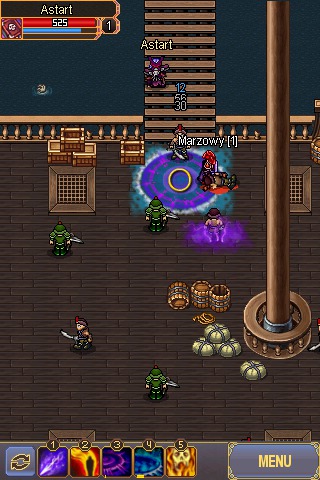 It is possible, however, to revive yourself on the spot, or even teleport between different statues. Doing so could get expensive, as either of these feats requires the in-game currency of "Miracle Coins". This points to how Warspear Online makes money – those coins can be bought, in the game, with real life money, as can other items such as food and potions.

The graphics of Warspear look remarkably dated, everything is very coarse and pixelated, which is a shame as Symbian can do so much more (as can the other platforms this game is available for). On the bright side, the game is fully of great music and rich ambient sound effects. 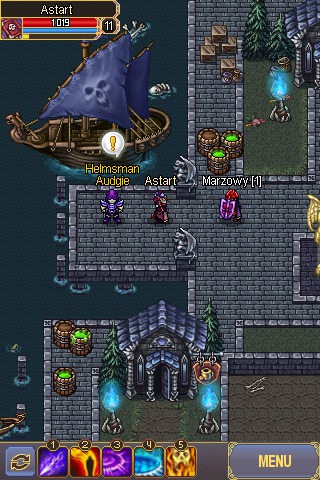 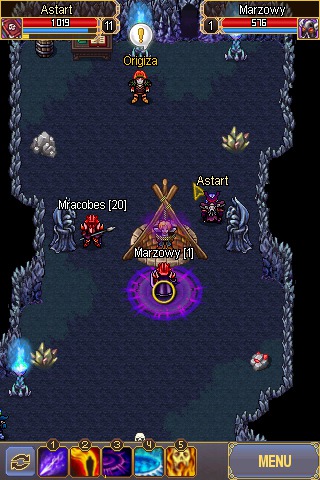 If you play on an Eseries device (e.g. Nokia E7 or E6) you will find that that there is legacy keyboard support. As soon as you discover and start using this (if you have an appropriate device – I reviewed with an E7), the game becomes far easier to control, especially when engaged in combat.

Of course, the main thing to consider about any MMORPG is the size of the player population. I have to admit that I was expecting Warspear to be quite a desolate place, given its niche targeting. I was wrong though, even in the newbie area where I spent most of my time, Warspear was teeming with players. Perhaps this shouldn't be quite so surprising, given that Warspear is also available on iOS and Android too. 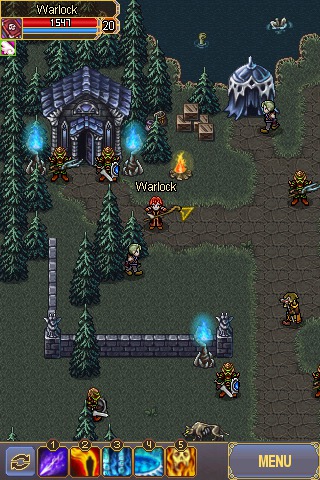 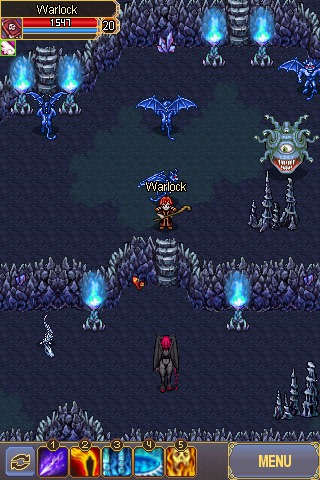 For me, Warspear just lacked that hook that keeps one wanting to come back for more quests, and I quickly became bored. However, I can imagine that MMORPG addicts will find having a world full of players and quests in their pocket quite an enticing prospect.

You can download Warspear Online from the Nokia Store or directly from http://warspear-online.com/en/download