Take Angry Birds physics, add bombs of various types and then add a real life opponent trying to blow you up as hard as you're trying to blast them, and you end up with Jelly Wars, a slick online multiplayer affair. In fact, Jelly Wars is not only online and multiplayer, it's also utterly cross platform (iPhone, Android, Meego, Bada), which means that there's never a shortage of people to play. The game itself is slick and well thought out, even if it's rarely quite as slick as the titles coming out of Rovio. 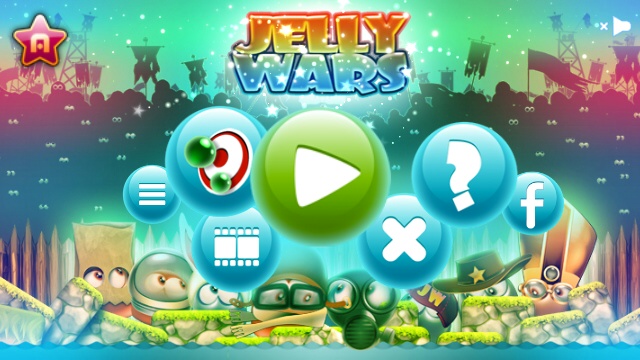 The back story is that there are two tribes of jellies (red and blue) and you take the side of one of these, engaging in physics-based fights around various terrain and obstacles, shuffling yourself around and firing off various types of bombs (standard, sticky, cluster) to try and destroy the representative of the other tribe.

Jelly Wars is resolutely turn-based, i.e, you take a shot, then the opponent, but there is a real time element in that you have to assess what action or shot to take and then perform it before the 30s timer runs out.

Learning about the various bombs available and what to do with them, plus how to move around, are taken care of with an in-game set of 15 practice levels, with hints - you can replay these as often as needed, as a refresher in how to play. Suggested trajectories are shown with a dotted line: 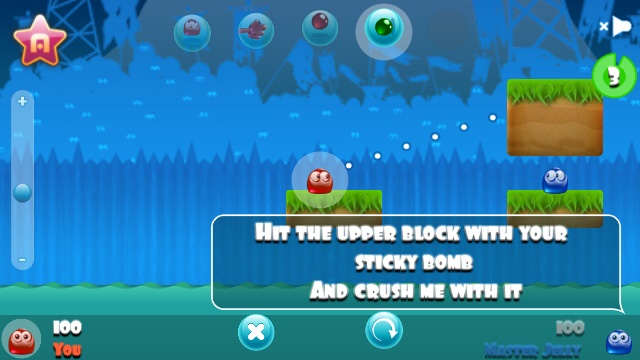 Taking a shot or making a movement is done by dragging back on your character and releasing - think Angry Birds slingshot and you're not far off: 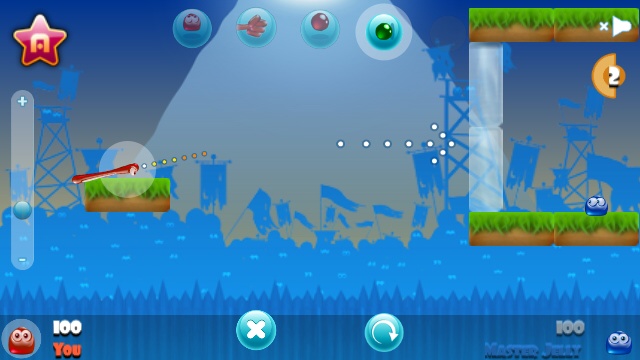 The idea of mastering the local practice levels and then heading off into the great online unknown to find human opponents is a wonderful balance and all implemented very prettily and smoothly here: 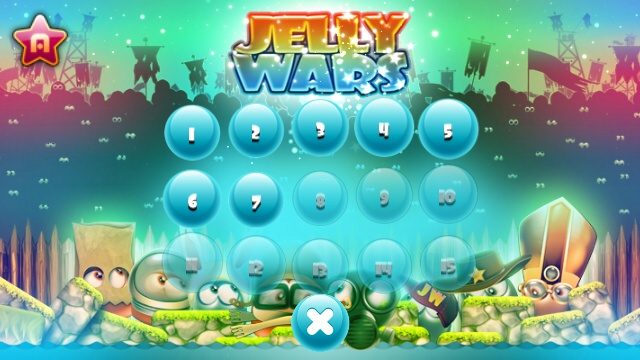 When you start Jelly Wars, you're asked to pick an Internet access point from your valid connections - a little odd, since most Symbian applications just go online silently these days, but hey, it's only one tap. When opting to play for real, there's a wait of only a few seconds while a suitable opponent is found (there does seem to be an attempt at matching you with someone of equal experience), accompanied by a delightful Disney-esque animation: 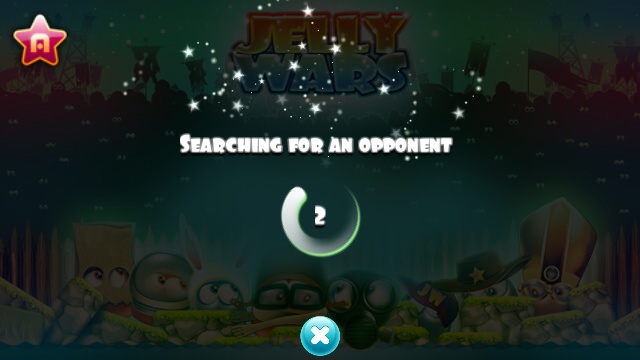 And then you're into full-on Jelly Wars battle.... As with Angry Birds, you can use multitouch pinch zoom to get closer to, or further away from, the viewpoint of the battle field, to swipe around as needed. In the screenshot below, I'm fully zoomed out. My character is blue, by the way, on the right, and my online opponent looks temptingly vulnerable halfway up a slope. In fact, I'm just as vulnerable - one of the tactics I'm learning in Jelly Wars is finding a cosy little nook or cranny that bombs can be fired out from - there are subtleties here that can only be appreciated by playing! 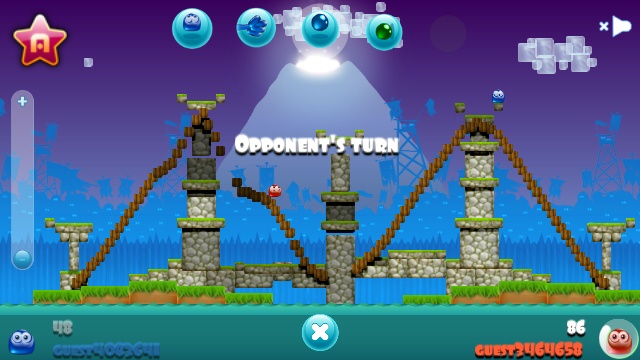 And here's another mid-game shot, here zoomed halfway in - looks like I've got to fire over some rather cuboid trees to reach my red opponent. Note also the timer, top-right, counting down the time allotted for me to take my move. If either player runs out of time then play reverts to the opponent. Gameplay is nicely centred around trial and error, just as with Angry Birds, as you learn by experiment just how hard to 'pull back', and at what angle, in order to hit each target, depending on distance, elevation and obstacles that have to be cleared. 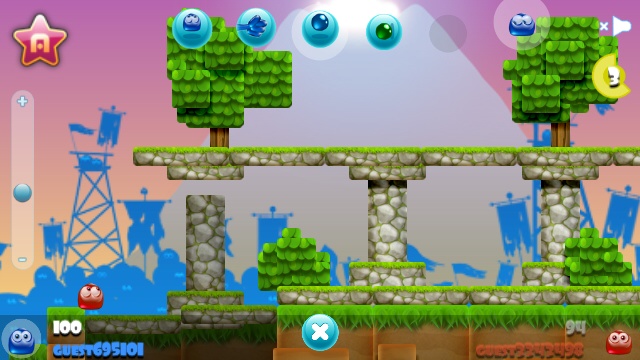 A 'hit' doesn't automatically destroy you (or your opponent), but it does reduce your points/health, which decreases from 100 and, obviously, when you get to zero then it's game over. A nice system which means that you're not blown out of the water completely by one lucky strike by the other player.

I've been playing the 'free', ad-supported version of Jelly Wars, and while I don't normally comment on in-app ads, those here are very nicely done, full-screen, along with an explanation of where to tap and when. I've seen so many games on Symbian bring up tiny ads that you can hardly read and/or supply confusing buttons, so Jelly Wars is a breath of fresh air here. There's also a handy banner link to the full version - well done. 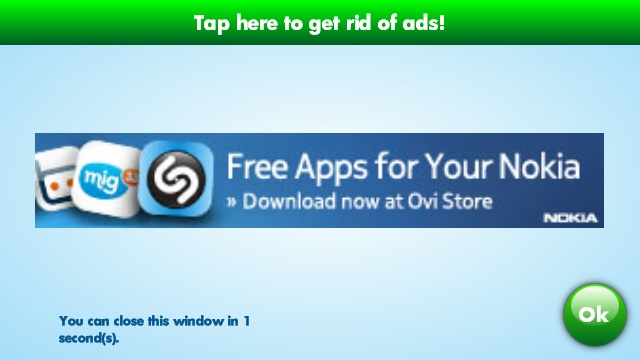 Rather artily, the main menu offers a cinematic storyboard - all very beautiful and it kind of tells the back story of the two jelly tribes - I think - but you probably won't want to watch it more than once(!): 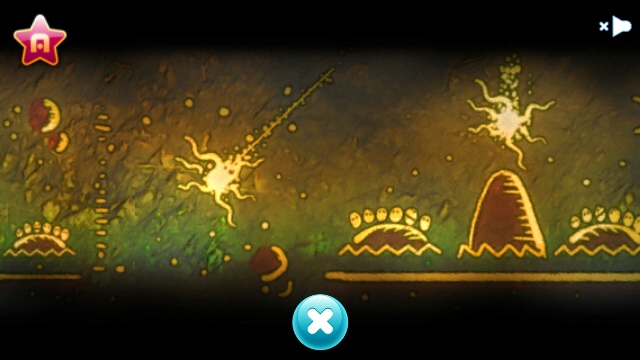 While in a game, there's an integrated chat facility - all very handy if you're that way inclined and if you get seriously involved with the Jelly Wars game community: 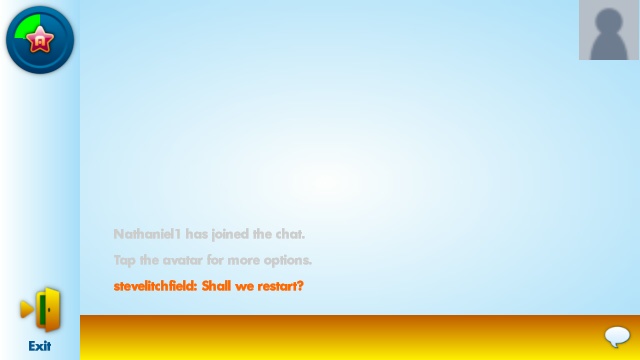 Star Arcade has also implemented elements of social networking - you can even 'follow' an opponent, to better find them again in the future for a rematch: 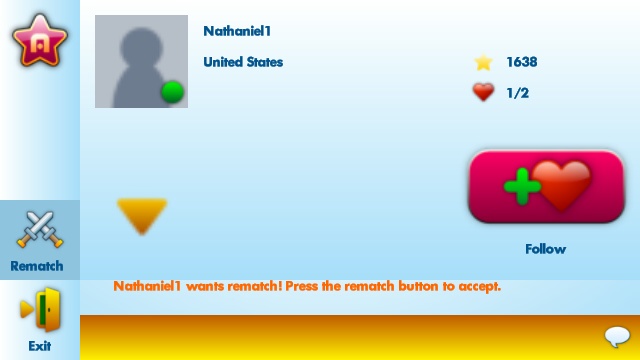 Here's the built-in player hub - all very clearly implemented with plenty of subtle links to more Star Arcade fare and its social acccounts: 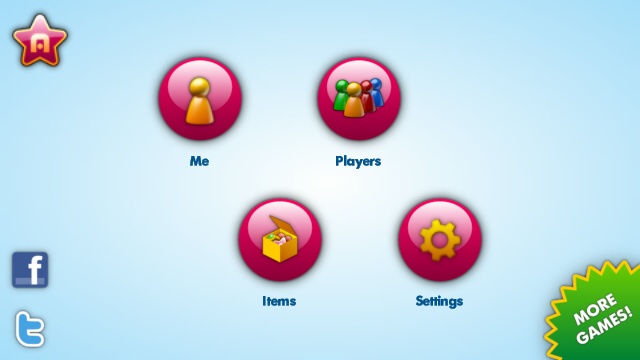 So far so good then. However, it's not all sweetness and light. Firstly, the help screens are lazily implemented as online resources. Resources which I failed to ever access at all. Either something's horribly wrong with Star Arcade's servers or the Jelly Wars help system isn't properly Symbian-compatible. Moreover, the frozen help page load, shown below, was enough to warrant an emergency close of Symbian Web from the multitasking carousel - and that doesn't often get needed. Black marks all round, I'm afraid! 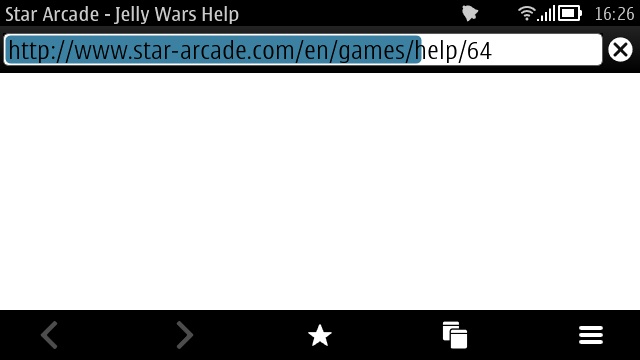 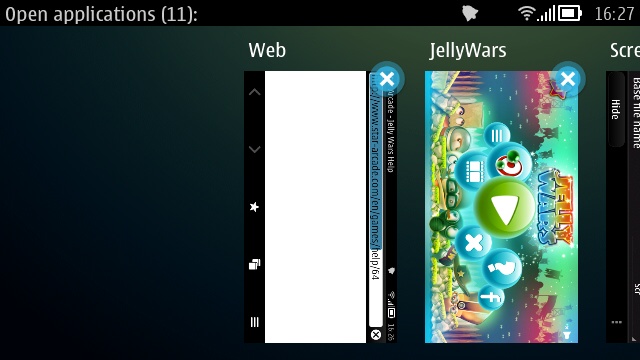 A second black mark is awarded for Jelly Wars implementation within the Symbian multitasking OS generally. When in the background (i.e. you've got the game menu up but switch away to another application), Jelly Wars doesn't go to sleep happily - there's a noticeable processor/battery drain. My Nokia 808 was at 50% battery charge and I switched away to do something else, then forgot I had the game still running. Next thing I knew, two hours later, my 808 power down with no battery charge left.

Yes, I should have remembered about the game, but I'm so used to Symbian developers being clued up about responsible existence in the background that I hadn't considered Jelly Wars would be an issue.

A non-working help system and battery-hungry existence aren't showstoppers, happily, and there's still a lot to like about Jelly Wars. Perhaps most of all that you can be part of the global multi-platform game and not restricted to 'just' Symbian-owning gamers.

Comments welcome if you get hooked by Jelly Wars (on any platform) - can it rival the likes of Angry Birds in terms of mass market popularity?