Something very different for AAS here - what we have here is custom firmware for a Nokia smartphone, in this case created by a Colombian enthusiast and aiming to bring old S60 5th Edition phones up as close to the modern Symbian experience as possible. That 'CFW Symbian Anna 7.9' (links and caveats below) ultimately still disappoints a 2012 phone user is 99% down to the limitations of the hardware of the time, mainly in terms of free RAM - but such improvements are still tremendously interesting, which is why it's receiving the review treatment here.

My old Nokia X6 boots to CFW firmware - this is part of the new intro animation....(!)

"But All About Symbian doesn't talk about Nokia or Symbian hacking!" I hear you say. Our philosophy has always been that we won't touch custom firmware (and the huge geek knowledge and use of unlicensed tools that generally goes with it) while the manufacturer is still providing updates for a phone. After Samsung stopped updating its i8910 HD. I famously did a series of features (e.g. here) on the HX custom firmwares, getting far more from the device than Samsung ever did.

We've now got to the point in Symbian's lifecycle that the older variants, in this case S60 5th Edition, are so far from Symbian's cutting edge (and especially so in the light of recent cutbacks) are fair game for us to talk about modifications to the manufacturer-supplied firmwares. I'm still not going to write about 'hacking', as in trying to find ways to install 'cracked' commercial Symbian applications because that's plainly unethical and damaging to the app ecosystem. But complete firmwares that aim to add in features and tweaks that aren't present in the Nokia-supplied versions are right up my street and interesting to all.

The Nokia 5530, 5230, 5800 and X6 are now looking very dated, with their small screens, small RAM quotients, slow processors and the legendarily clunky S60 5th Edition interface, adapted directly from the non-touch S60 3rd Edition version without a lot of touch optimisation. So why not give these devices a massive shot in the arm with some new software?

Now, before I go any further, there are some things you should know:

I've also done a full 20 step walk through of the steps needed to accoomplish all this, in case you're feeling brave!

As featured on the N97 and N97 mini, the debut of a homescreen with six customisable widget slots. Heretofore these hadn't been available at all on the older S60 5th Edition phones, so having live information and so much in the way of shortcuts is a major, major boon. 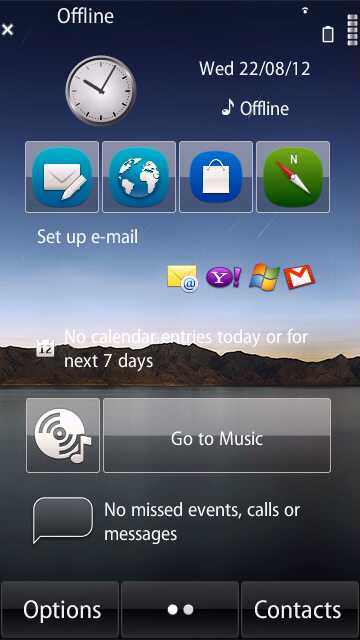 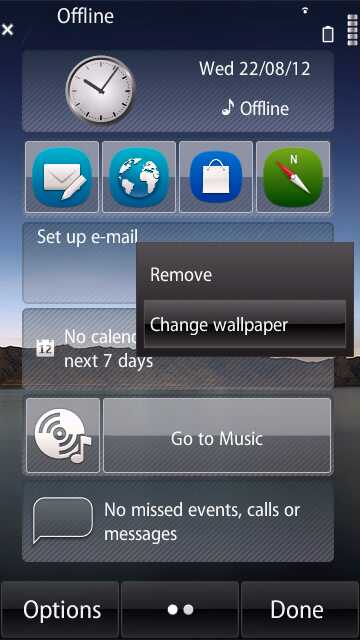 As it sounds, despite the presence of a widgetised homescreen, an extra few Megabytes of RAM have been made available, with roughly 54MB of free RAM after booting. Don't get too excited though, S60 5th Edition never really used its limited RAM very well and it's all too easy to still run out - just load up a 'modern' multi-megabyte web page and watch what happens. Still, the more RAM optimisations the better, so.... 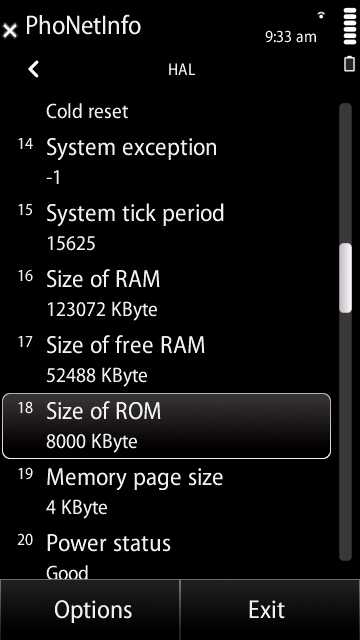 Around a 20% increase in processor clock speed, the legendarily slow S60 5th Edition hardware and software platform could do with a speed boost. Definitely worth while here and quite noticeable, especially with 'Theme effects' turned off - my old X6 was decidedly snappier. 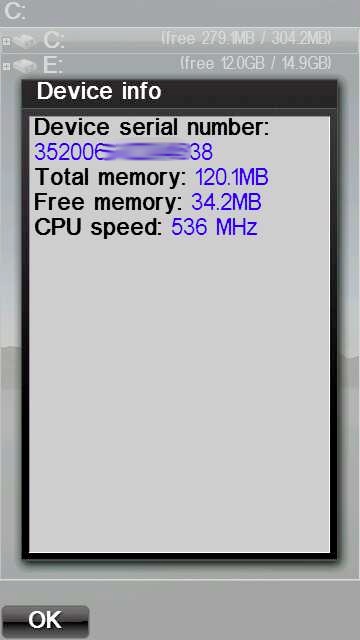 Tap to unlock replaces the swipe to unlock

Nokia thought they were doing the right thing by putting 'swipe to unlock' into the last X6 official firmware, but the custom firmware developer reckons this wastes RAM and slows the phone down. So an implementation of 'tap to unlock', as on Symbian Anna/Belle, has been implemented instead. 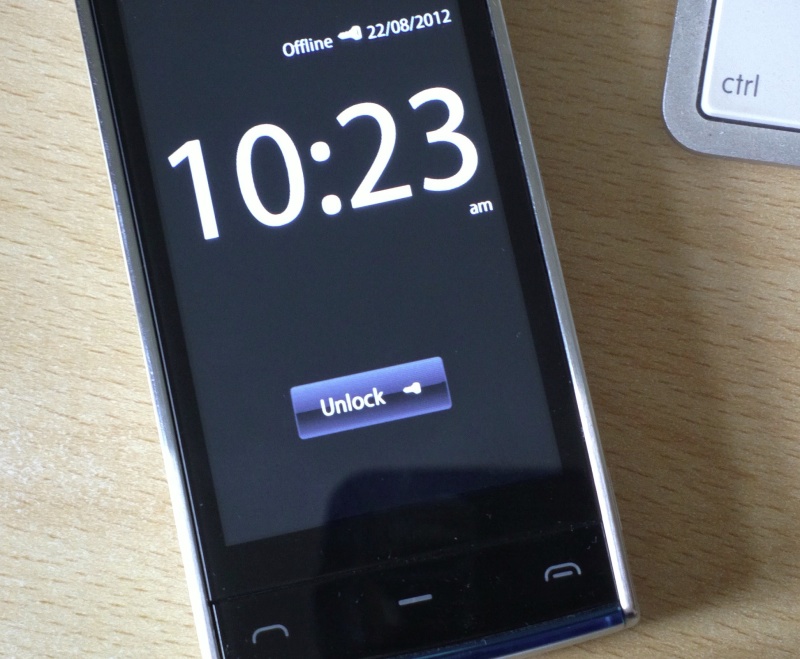 I can't say that needing a huge Web cache was ever a priority for me on S60 5th Edition - big pages were so slow and problematic that I tended to stick to the mobile web instead. However, using disk E: for the Web cache will help those with smaller system disks, e.g. the Nokia 5800.

This sounds better than it is - this isn't the full Symbian Anna keyboard, which was itself rather fiddly but at least had word correction. Instead, it's an even fiddlier system, with cludgy redundant echo of what you're typing above the main keymat - and no word correction, of course, since this wasn't in S60 5th Edition. To be honest, on a 3.2" screen, this is simply impossible to use - it took about a minute to type the short phrase shown below! Stick to the T9 keypad implementation, which is much faster if you know what you're doing - or switch to landscape (see below). 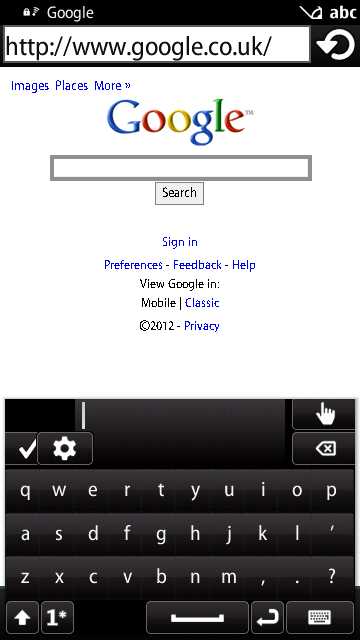 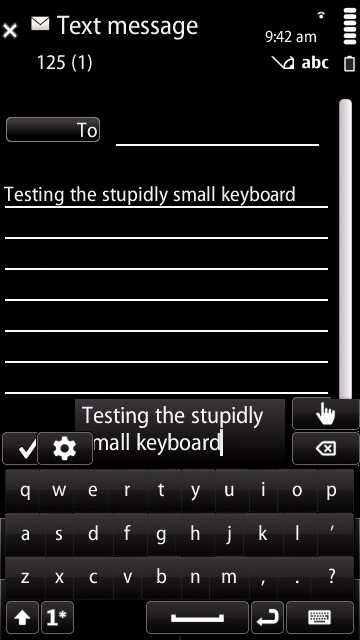 The landscape keyboard's layout has been improved

Without the clunky framing panels either side of the text input box, the appearance of the landscape keyboard is slightly more modern. 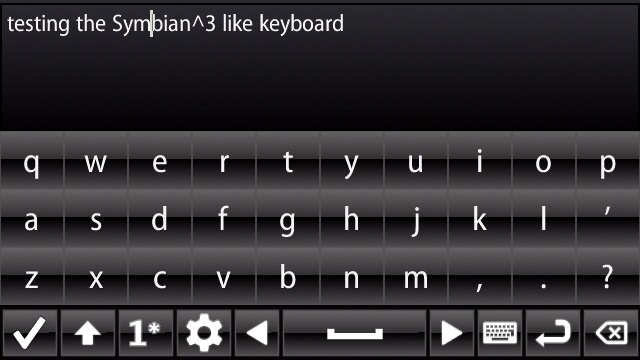 We're still waiting for this officially, but the celebrated Nokia Pure font is present here in CFW Symbian Anna 7.9, giving these old phones something of a fresh new look. 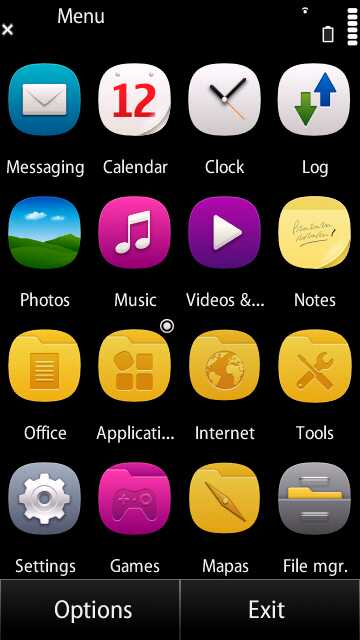 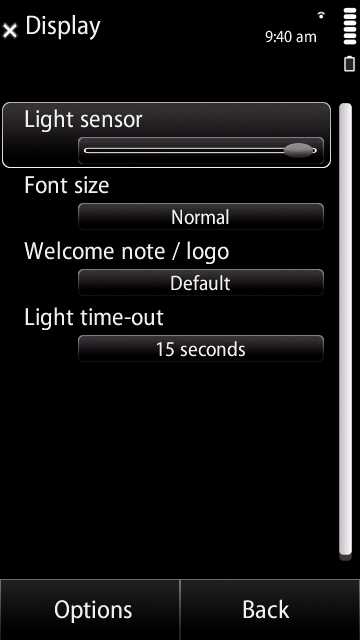 As you'll have spotted above, there's also a less wasteful application grid layout, with 16 icons visible at any one moment in any of the icon menus. What a great idea and only a few application captions get truncated as a result. (Note 'Mapas', probably a typo creeping into the English firmware from the Spanish developer!)

A little pruning by the CFW developer has produced a few more MB free on disk C:. Not important on the X6 here, but doubtless useful to the Nokia 5800 etc. 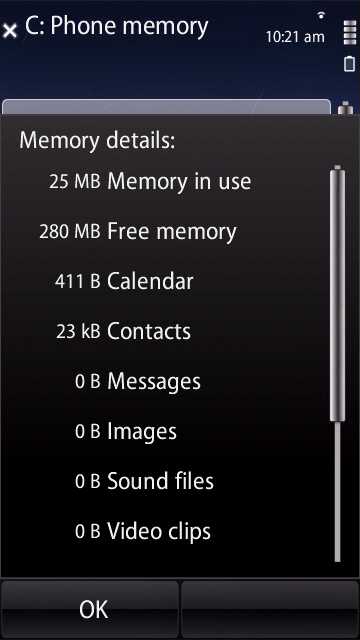 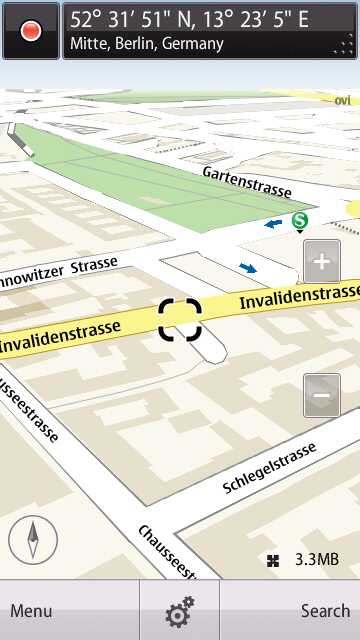 Also available separately from Nokia, but nice to have these baked in:

In addition, I checked all the usual things, including compatibility with a variety of applications. Qt apps had no trouble installing. I installed utilities and games with no issues. I was hoping some extra video codecs had been slipped in, but alas not - although all the clips in my mass memory came up with thumbnails, indicating that the OS was capable of playing the videos, when I tried many came up with 'Unable to play, just reproducing the audio, as with vanilla S60 5th Edition. 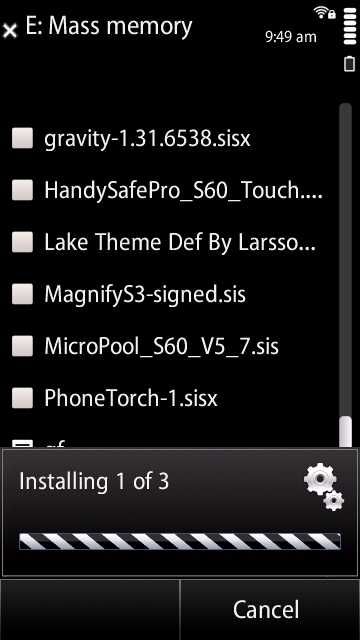 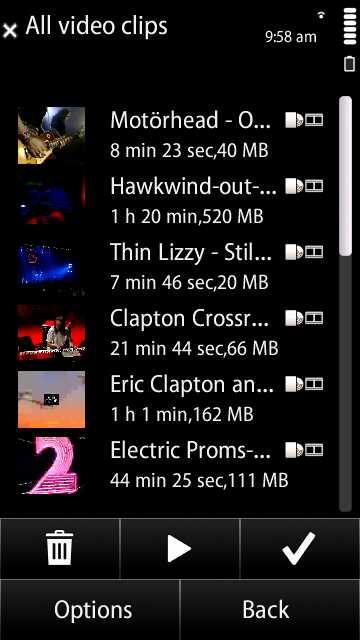 Taken as a whole, these improvements add up to a big deal. In the normal course of events, I'd have been wary of custom firmware for a device like the 5800 or X6, since Nokia has had a good track record of providing updates to each of these phonesm albeit with less drastic changes in functionality. But the chances of another update to any of these 2008/2009 phones is now close to zero, plus the value of the hardware is now well below £100 second hand, so why not give the custom firmwares a try? With the caveats mentioned above, of course....

'CFW Symbian Anna 7.9' doesn't quite deliver what the name suggests, and some of its improvements aren't worth all the firmware flashing hassle, but - taken as a whole - the package certainly gave my X6 a new spurt of life. And provided quite a bit of geeky tinkering fun along the way!

Comments also welcome if you're a keen modder and can suggest an even better custom firmware for any of these smartphones.