The last time I formally reviewed a Zingmagic Backgammon game was five years ago, amazingly, an eternity in the mobile world. Since then we've had much higher resolution screens, touch interfaces, faster processors, and so on. The core game hasn't changed, of course, this being based on a board game that dates back thousands of years. Meaning that you probably already know how to play this - though how well you know is something that Backgammon Pro V aims to find out.

Backgammon itself (Wikipedia entry here) is part luck but mainly skill, combining strategy and knowledge of the rules of probability to outwit your opponent - in this case Backgammon Pro V running on Symbian. There are six difficulty levels here, corresponding to how closely the AI examines the probabilities of your next moves and how much strategic algorithms come into play. I played on the two hardest and each game proved as challenging as playing a good human player - perhaps harder.

One UI quirk is that Zingmagic's code, which has been brought, to some extent, kicking and screaming into the modern Symbian age, ends up producing a few UI gotchas. For example, you set up a new game, with your chosen preferences, and then tap on the 'back' icon - to find that everything you just entered has been forgotten. Instead, you have to know to tap on the 'more' icon and then choose 'Start game' from the pop-up menu. As I say, a quirk and not a showstopper, but it caught me out. 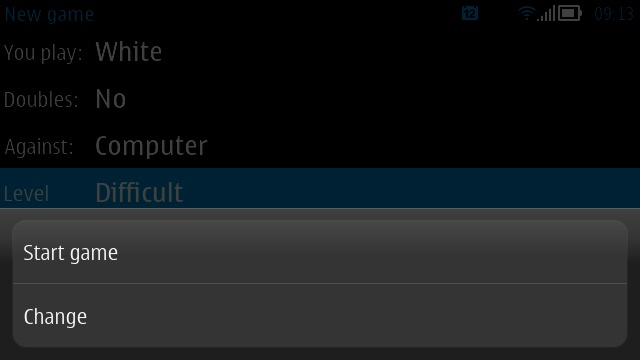 Once into the game, the board is self explanatory, with full touch support, of course. There are three layouts available, with different combinations of main board size, side/bottom panels etc. The presence of the large 'Options' and 'Exit' buttons are a bit jarring in 2012, there's no pretense at fitting in with the Belle style guide here, but it's not an issue. What matters here is gameplay, with enough computer AI to really stretch your grey matter and provide a challenge, and Backgammon Pro V has this in spades. 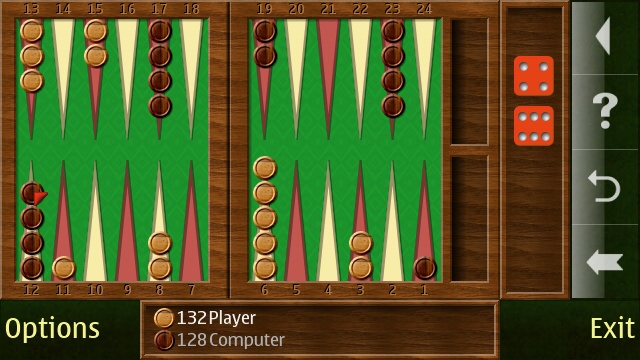 Pieces can be dragged and dropped as needed, with audio confirmation if you get it wrong (a klaxon, which can thankfully be turned off) and with visual highlights to indicate possible drop zones for a piece once your finger's moving it. Nicely done, though those with large fingertips may find piece movement a little fiddly, given that your finger will be obscuring the piece being moved.

Slightly odd is that 'bearing off', the process of removing your pieces from the board once you've made it round to your 'home' section, is done differently, by tapping and then tapping in the adjacent panel, rather than using drag and drop. But it's a minor inconsistency.

I loved the way the 'pip' score was always shown, giving an instant mathematical guide as to whether you're behind or ahead, and by how much. This is useful for knowing how big a gamble to take in terms of deliberately exposing 'blots' (single pieces on a point - hey, catch up with the jargon of Backgammon, will you?!) and also if you're playing with 'doubling' (which Backgammon Pro V supports), a part of the scoring/gambling aspect of the board game that I've never played. Comments welcome if you've played for money and used doubling - how useful is this facility against a computer AI?! 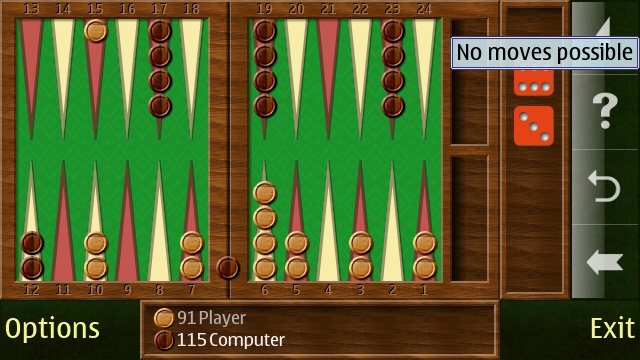 New for the Pro V version is this statistics screen, showing the number of dice throw combinations seen so far in this game - interesting, though not actually that relevant - just because double-six just came up, it's no less likely to crop up again on the very next throw etc. 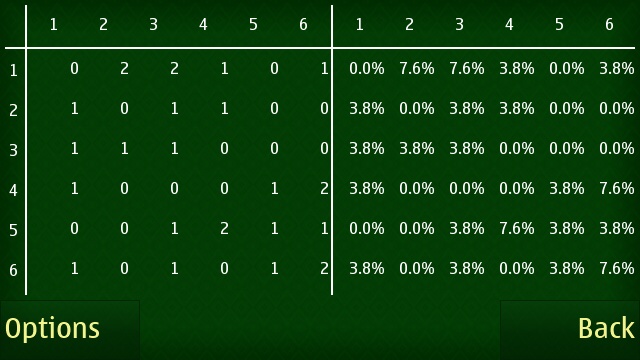 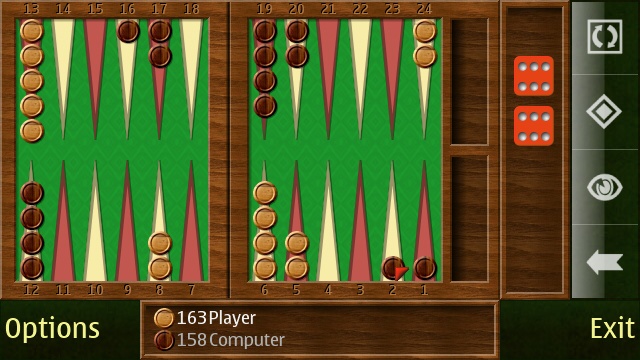 The fourth toolbar button (the big arrow) toggles the other three buttons to the icons shown above, letting you change the: 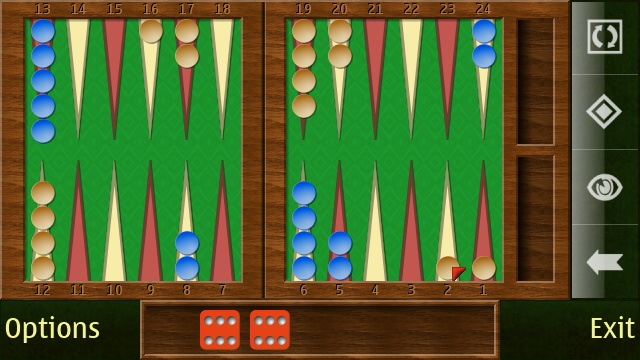 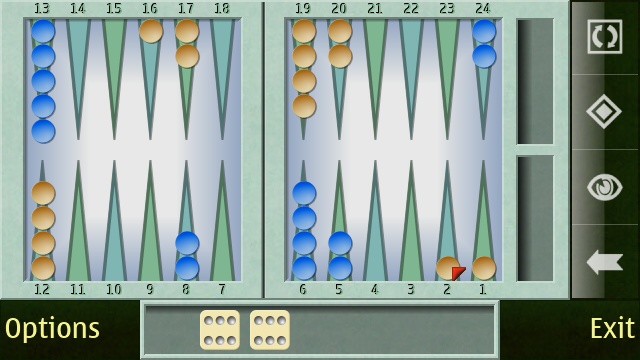 You can undo a move - and even rewind the entire game, resuming from any given position, though of course this might be construed as cheating, should anyone be watching... shh.....

Plus there's a 'hint' system, which is of use if you're learning the game or if you have a sudden mental blank, though I'd suggest that most players will know exactly what they want to do, following their favourite strategies etc. 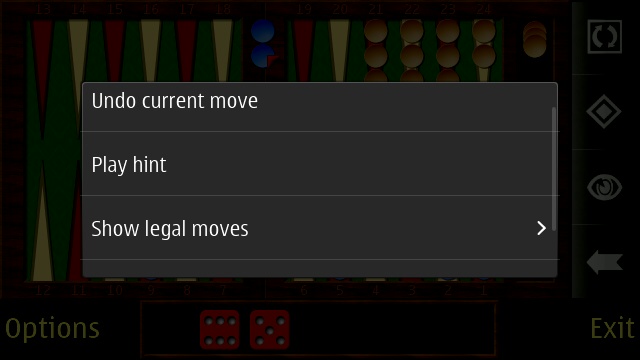 Although the nature of Backgammon and its board shape means that landscape is the best fit for a phone version of the game, Backgammon Pro V also works in portrait mode - just rotate the phone and use it this way if it's more convenient. Surprisingly, it's almost as playable like this, not least because the pop-up menus in Symbian fit more naturally in a portrait environment. 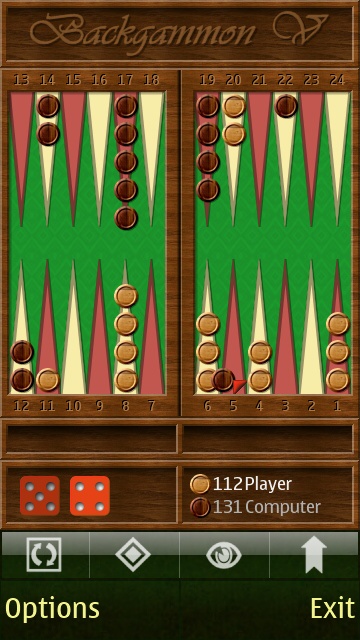 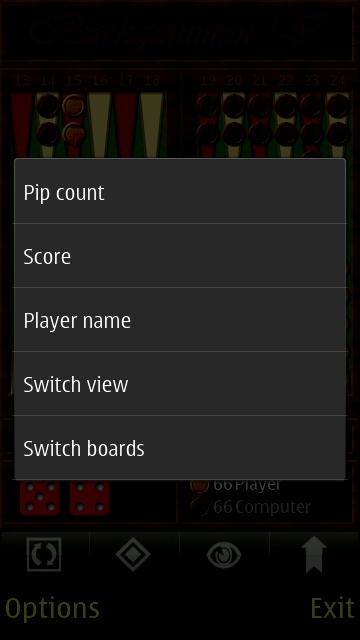 Some may claim that it's hard to get excited about a version of Backgammon in these days of 3D-rendered, action-packed titles, but if you're someone who wants their brain challenged more than their reactions then a board game conversion remains a good bet. Remember my editorial on infinite games?

The main omission from previous versions of Zingmagic Backgammon is that you can't have multiple games 'on the go' at the same time - but this is completely forgiveable since my brain can't cope with more than one simultaneous game either, so class this as a welcome simplification. While the main omission as a 2012 game is that, unlike Backgammon Live, you're always playing 'offline', i.e. against the phone, and not against another human being somewhere else in the world. Personally, I prefer this, since games are twice as fast (no thinking time needed for the other 'player') and because it means you can play when travelling, often without a decent data connection.

Aside from the slightly dated 'S60 5th/Anna' toolbar clashing with the Belle menu popups, and aside from the clumsy initial dialog, Backgammon Pro V is faultless as an offline implementation of a classic board game. Configurable, quick, challenging - and clever, too, always remembering exactly where you got to, so you'll never lose a move because a call came in or your battery ran out.

Backgammon Pro V is £3 in the Nokia Store (the version reviewed here), while there's also an ad-funded (i.e. will need data all the time) free version of the same game.