iBomber Defence is the latest tower defence game for Symbian, and being my favourite genre of game, I jumped at the chance to review it. This is a title that has been ported from the iPhone, and Electronic Arts have done a great job. The problem is that tower defence games are a dime a dozen, and so to be great you have to introduce some new features to differentiate from the rest. In this review I investigate what new twists have been added to this title.

iBomber Defence is vaguely set during World War II, with the campaign mode being set across the Afro-European front and the choice to join the Allies or Axis. Other similarities of the era relate to the weaponry, but it's all superficial – this is a tower defence game. As such, there are fast-but-weak bad guys, and slow and heavily armoured bad guys; you have a range of weaponry ranging from light damage with high rate of fire, to heavy damage weapons that are slow to reload. To mix things up though, iBomber Defence comes complete with a comprehensive set of enhancements too.

During testing, I uncovered three different maps to play on, which appear in both the quick play missions, and represent the different environments that were being fought in during World War 2. There are more maps which become unlocked for Quick Play as you progress through the campaign. All of these have simple routes for the enemy to follow – the game mechanics don't allow for routing enemies through the longest possible path. All you can do is cover the path set out, and hope they don't make it through to your base – or at least more than ten of them don't!

You start off with the machine gun and the cannon (anti-air too, but early levels don't feature aircraft) – you place them by dragging from your arsenal, and upgrade by tapping for each tower's menu. Unusually for a tower defence game (and that's a good sentence to see in this kind of review), the enemy can fire back at you. This means you'll have to keep an eye on the tower's health and spend your cash to repair them. You'll have to repair them before you can upgrade too. Another unique feature in this game is that placing weapons on high ground will increase their range. 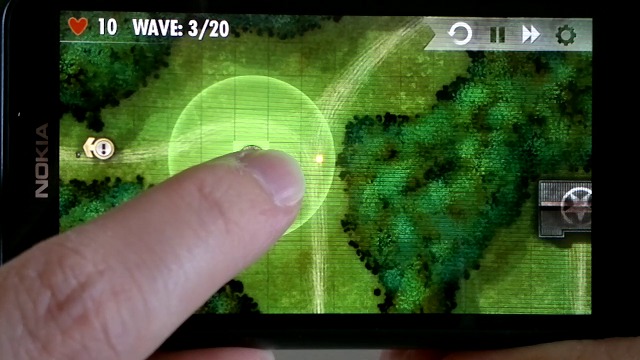 Ranges are highlighted as you place a weapon

If you make a strategic error, you can go back one wave, rather than abandoning the entire level. For those who don't know, tower defence levels are split up into waves of enemies, 20 to 30 is a typical number of waves per level. More points for originality to iBomber Defence.

Cash is used for upgrading and repairing during a level – but "victory points" are the inter-level currency that you'll use to increase the level to which your current weapons can be upgraded, and to unlock other weapons and facilities. You only get one or two points per level so you have to think carefully about the order you'll unlock things. For example, the Comms Unit doesn't damage enemies itself but increases the range and damage output of the weapons within its range. In a nice metaphor, the "Sabotage" tower is used to slow down your enemies, allowing your guns to get more shots in; and the "X-Weapon" is a long range, heavy hitting tower that also boosts nearby weapons. 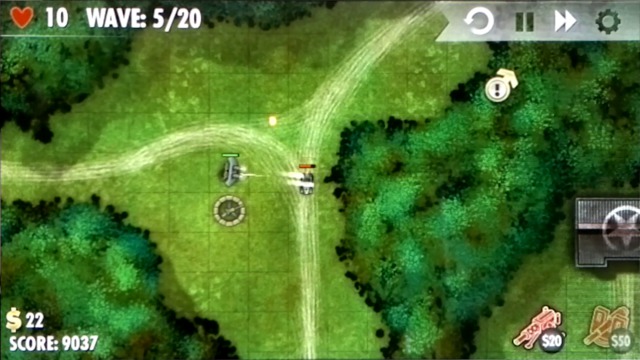 You're not alone in making these choices though; because the game is jam-packed full of useful information on everything you need to know. It even advises you to prioritise upgrading weapons over buying new ones, and advises that the Comms Unit is only cost effective if it's buffing three or more towers. This sort of quantitative data is usually left for the user to 'guesstimate' on their own in other games, and it was a refreshing change to see such exact advice given in help screens. 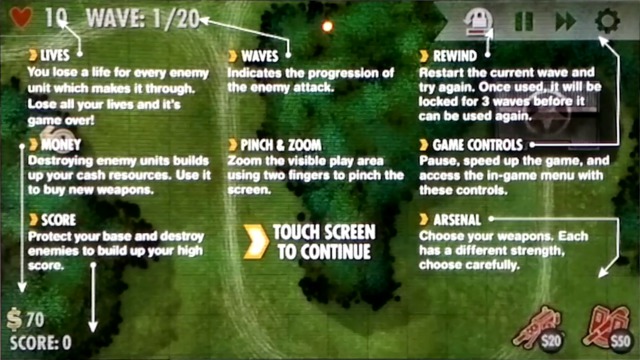 As for gameplay, if things are too slow for you, there is a fast forward switch. However, you are able to place and upgrade towers while the game is on pause if things are going too fast for you. Overall, I found the pace of the game just right – fast enough to stop me getting bored, but just slow enough to give me time to make decisions about how to spend my resources.

I felt that iBomber Defence was a tad pricey at £4.00 – but the more time I spent with it, the more I could see the quality that had gone into the game, and a level of polish other Symbian games of this genre often lack – even down to the touch screen responsivity.