Predating NFC in mainstream use by a year or two, and with some definite areas of overlap, QR codes still haven't taken off fully, I'd argue. You don't see them on every shop window, on every publication, even though they're easy to generate and free to present to the world. Regardless of take-up, there will be times when you want your Symbian smartphone to read both QR codes and the older, linear barcodes - so what software is currently available to read these and how well do all the titles work?

At their simplest, QR codes (the letters standing for 'Quick Response') are two-dimensional bar codes, i.e. a grid of black and white squares representing a pattern of bits of data. With the right software, these can be read and converted back into the original information, often (but not always) an Internet resource address of some kind.

From the QR code Wikipedia entry:

QR Codes storing addresses and Uniform Resource Locators (URLs) may appear in magazines, on signs, on buses, on business cards, or on almost any object about which users might need information. Users with a camera phone equipped with the correct reader application can scan the image of the QR Code to display text, contact information, connect to a wireless network, or open a web page in the telephone's browser. This act of linking from physical world objects is termed hardlinking or object hyperlinking. QR Codes may also be linked to a location to track where a code has been scanned. Either the application that scans the QR Code retrieves the geo information by using GPS and cell tower triangulation (aGPS) or the URL encoded in the QR Code itself is associated with a location.

Of particular note is that there's usually redundancy in each code, in terms of the data bits presented, so that if part of the QR code is obscured, smudged or torn off, the code and its data can still be acquired and deconstructed.

Although traditional ('one dimensional') barcodes are far less sophisticated, they're also far more common than ('two dimensional') QR codes, which is why most of the utilities reviewed here can cope with either form of digital representation.

To test the reader applications here, I selected two 1D codes (on a book and a music novelty) and two QR (2D) codes, a largish one (1") from a web print out and a tiny, challenging one (1cm) from a promotional brochure: 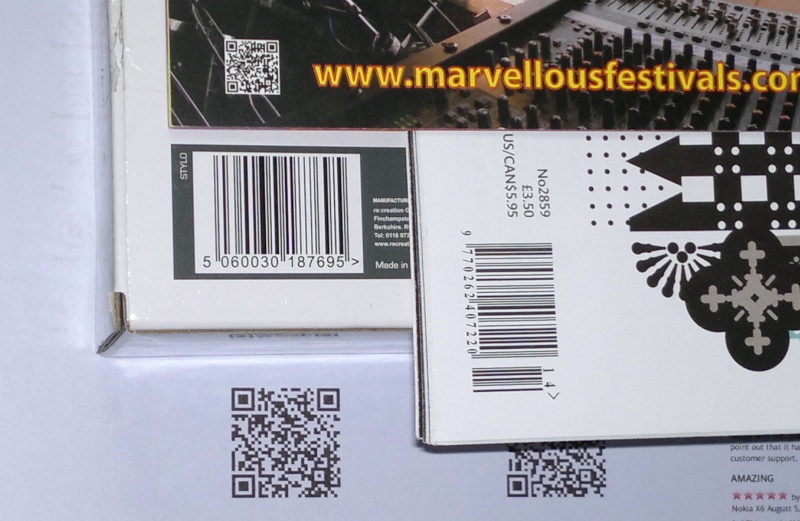 In each case, the job of the reader utility is to recognise each code, decode it and then either directly open the linked resource, or allow me to do this manually or save it somehow. The decoding stage for the 1D barcodes involved access to the appropriate product database online, so it goes without saying that the test N8 was fully online during the reviews.

A quirky and slightly clumsy interface that also produced patchy results. When BeeTagg works (on the larger QR code and the box barcode) it was lightning fast at detecting the code and bringing up details. In the latter case, it brought up correct details for the Stylophone on Amazon. For QR-encoded URLs, after detection, there's the option to open the link directly, to save it as a favourite or to share it in various ways. Very neat and fast, but I was disappointed that the smaller QR code couldn't be decoded, even with the built-in digital zoom function and even with the code seemingly very crisp on my N8's display. When scanning the right hand printed out QR code (which goes to an Android market deep link), BeeTagg crashed every time. 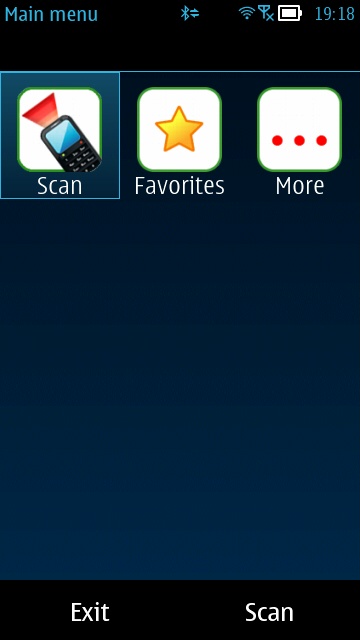 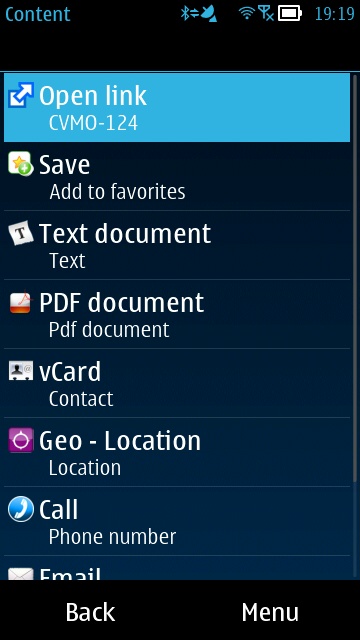 Also somewhat quirky, in that once a URL has been decoded and an informational page loaded on the web, you can't get back to scan something else - you have to exit the application and then restart if needed. Plus the camera display seemed to have been stretched - QR codes were elongated rectangles and not squares! Not showstoppers, but worth noting. On the plus side, ScanLife got the tricky magazine 1D code (with the side code to confuse it) and it handled the Android QR code, though the small QR code on the brochure eluded it, even though (again) it seemed to be crystal clear in the viewfinder.

Of note is that the ScanLife web site offers various QR extras, including making your own codes. 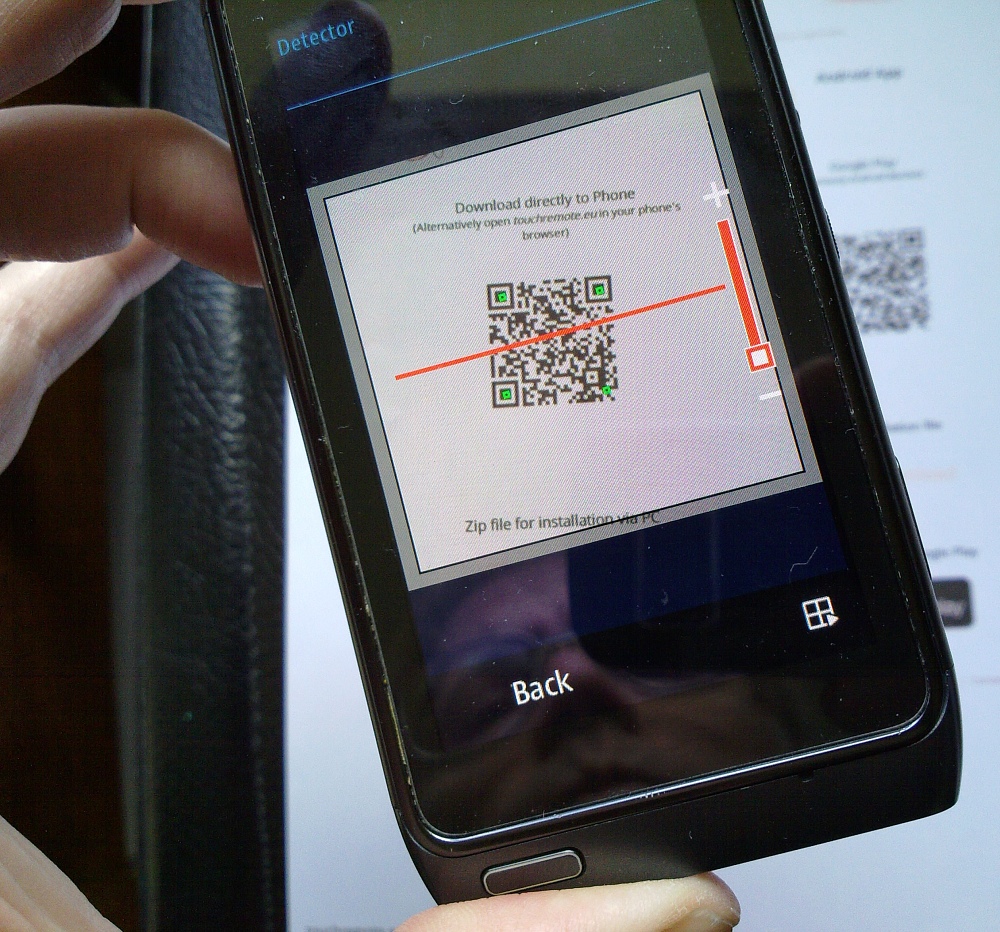 Mobiletag got off to a rocky start with me by asking me to wait while the GPS was fired up, to get my current location, followed by presenting a detailed profile dialog, of name, address, and other details. I dare say that these parameters are of help when finding a commercial product in a database later on after a successful recognition, but it's a heck of a lot more benefit to some agency somewhere to have all my personal information. It's a bit of a privacy intrusion and it hits you immediately. However....

With that out the way (you can 'Skip' the dialog and you can turn off GPS tracking in Mobiletag's Settings later on), it's largely good news - the application acquired all my QR and 1D barcodes without any issue. Very quickly, too. The brochure QR code brought me straight to their web site, the web-printed QR code (for a phone app) started downloading the app and the Android install link popped up the appropriate text string as you might expect. The 1D barcodes also scanned quickly, but in each case the codes didn't match anything in Mobiletag's product database, which is a bit disappointing - being able to capture and decode a barcode means nothing if the output is simply a long number and not a meaningful product link or description.

Still, both QR codes were captured and handled consummately, and this round-up is intended to be QR-centric so I'm still giving Mobiletag QRcode Scanner a qualified thumbs up. 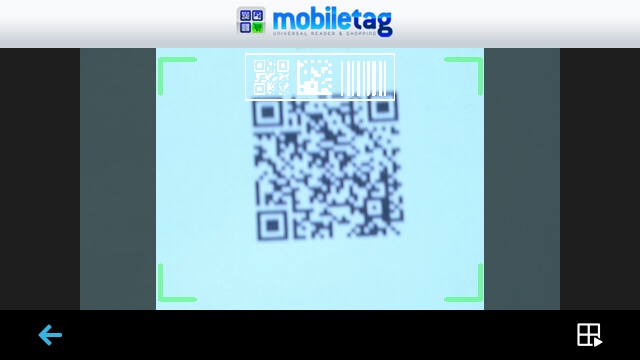 Also starting with a basic 'profile' page, along with a scary warning about sending SMS messages (which turned out to be linked to the social 'Invite' function), NeoReader did get down to business quickly thereafter, unusually in landscape mode only. There was fast recognition of all three QR codes being tried, including the very small brochure one. However, as with BeeTagg, the Android Market link code crashed the application, which I'm sure is not meant to happen.

1D barcodes were fiddlier to scan, with no guide line on the screen, but they did get captured. However, the resulting code just gets popped up in your browser with links to try searching for the number in Google or Amazon, which is a bit feeble - there's no actual look-up of the code in a NeoReader database.

The most modern and pleasingly-styled application in this roundup, with Twitter and Facebook integration for sharing scanned URLs, Booyah's scanner sadly underperforms when it comes to the actual business of code recognition. The two larger QR codes were each captured and turned into URLs, but the smaller QR code couldn't be detected and neither could either of the 1D barcodes.

On the plus side, there's the facility to scan from already-snapped photos, so I experimented by photographing my small QR code and then loading the snap into QR Scanner. Only to get the error 'Too little dynamic range in luminance'.... I tried cropping the photo right down to just the code - and got 'No code detected'. Sigh. 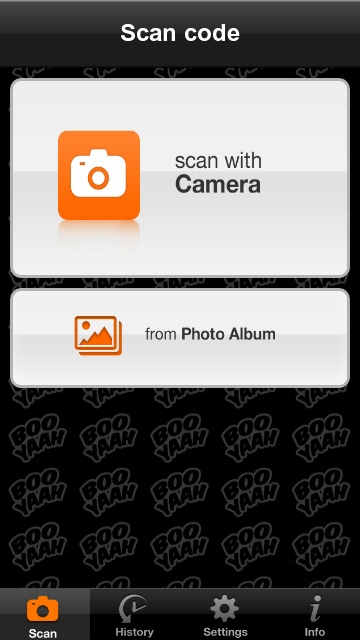 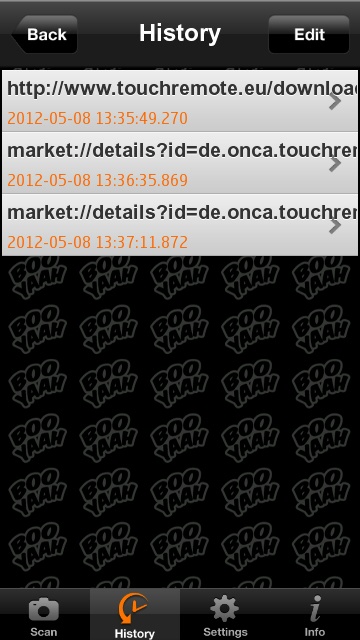 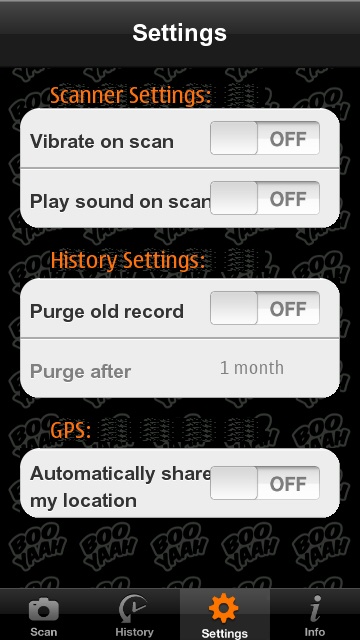 Oh dear. I'm all for ad-sponsored applications, in that they make what would otherwise be commercial software free for everyone, but this is a pretty sad implementation. Right from the outside, with the wording starting 'We are able to provide you with a free, full version of this game....' - 'Game'?? Then there's the fifteen second (roughly) delay between accepting the terms of the application and being able to get to a scanning viewfinder. And that's not a one-time delay, it's that long between subsequent scanning attempts.

I say 'scanning attempts', but that's giving this application too much credit. It simply takes a photo, with no apparent focussing, and then tries to pick a QR code out of the image. It succeeded with my larger QR codes but failed with the smaller one. I'm sorry, but there's minimal UI, minimal functionality, what is there is too slow and... I just gave up. 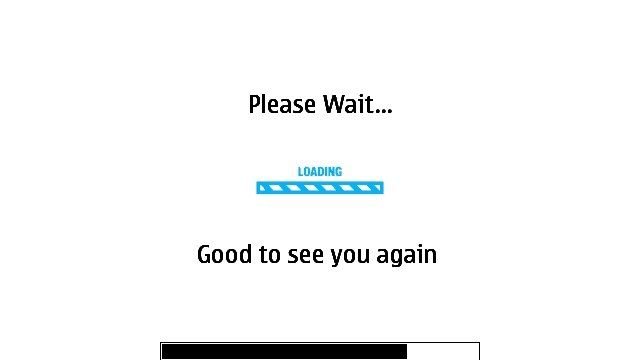 Possibly the oldest of the tools in this round-up, Upcode hasn't necessarily been updated enough to compete. Certainly there's no auto-detection of 2D vs 1D codes - Upcode starts looking for QR codes and then you have to use a '2D/1D' switch on the menu if you want to start looking for barcodes. Having said that, in my tests, Upcode failed to capture either barcode. It managed to capture and interpret all the QR codes, but only managed the small one after I went into the menu again and set up a 'Zoom' override - again, something that you might think should be on a toolbar or control icon in the main interface.

Upcode has been a reliable QR stalwart for years on Symbian, but it could do with a serious facelift and functionality update.

Seven tools then and (apart from the Sland Media outlier) six applications with fairly similar scores. The other obvious parameter is that all of the titles here are free to download, so there's zero risk in simply grabbing several and seeing how well they work for you. I'd suggest you start with ScanLife and Mobiletag and you may not need to experiment further.

EDoF (Extended Depth of Field) is, of course, the elephant in the room here. All my tests above were done on the Nokia N8, with true auto-focus camera, but there's a good chance you may have a C7, E7, E6 or similar, all with EDoF. In which case capturing a QR code is a significantly harder prospect, since nothing closer than 40cm will be in focus properly.

However, all is not lost:

You will, however, have to say goodbye to trying to scan 1D barcodes, since these tend to be smaller, more precise and don't have the error correction.

Armed with my opinions above, I'm sure that some of you will head into the Nokia Store to grab a few candidates. Comments welcome on how well each works - please do say which device/cam you're using them on!

Steve Litchfield, All About Symbian, 8 May 2012