Available either in 10 day trial form or for immediate purchase, Notekeeper aims to offer a healthy degree of access to your Evernote online account from your Symbian smartphone. In the absence of an official client (the Web Runtime version for S60 5th Edition was phased out a while ago), Notekeeper is by definition the best Evernote client for Symbian - but happily, it's also a slick, thoughtfully-implemented and reliable solution that I can recommend.

(See the links above for download of the free 10 day trial version or buying the commercial version.)

Evernote, in case you've been living under a rock and hadn't heard of it, is an online service keeping track of things you want to remember. Not to-dos, but longer pieces of content: articles, groups of paragraphs, links, photos and more. Starting with a pure text-based system, Evernote has grown considerably in the last year or so and the desktop version now includes multiple notebooks and a 'trunk' of apps and services which have plug-ins from, and to, Evernote. But the core of the service remains: you find something (essentially) textual that you want to keep forever and paste it into a new Evernote.

Unsurprisingly for a modern cloud-centric app, Notekeeper is implemented in Qt, starting in three or four seconds - not bad, but you'll probably want to keep it loaded in RAM most of the time, i.e. switch away from it using your phone's Home key each time. After the initial log in to Evernote there's the obligatory swipeable view of your Evernote notes, all shown black-on-white, which isn't very power/AMOLED-friendly and, sadly, there's no setting to change this. Still, all my notes appear to be here, along with the facility to browse other Evernote notebooks, should I have any.

With the ever-growing range of note types in Evernote (images, audio, etc.) you obviously don't want the entire online database synced to your phone's limited storage (and through its bandwidth) each time you sync, so there's a healthy degree of intelligence here in Notekeeper about what gets synced, what gets stored offline, and so on. Notes marked in this application as 'Favourites', for example, are always kept synced and stored locally, for offline use if needed. 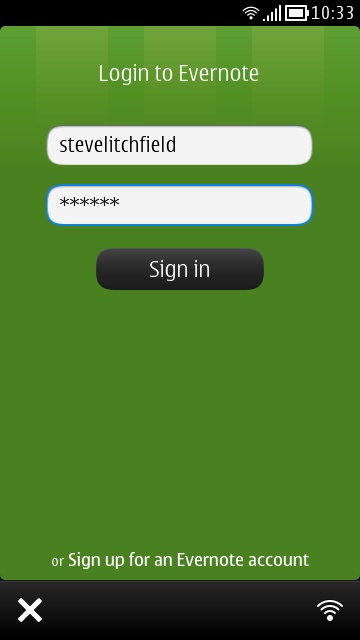 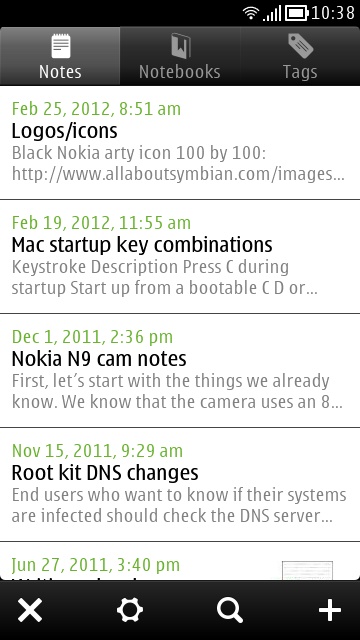 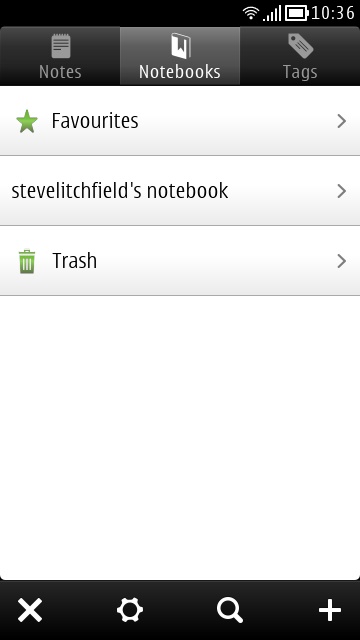 Notes come up fine on the whole, with images handled sensibly - small pictures are shown inline, while large photos are shown in 'fitted' form and then you have to tap on them to view in a full-screen viewer, panning or zooming as needed. 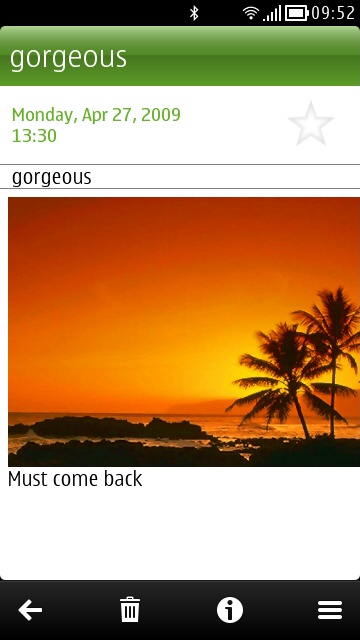 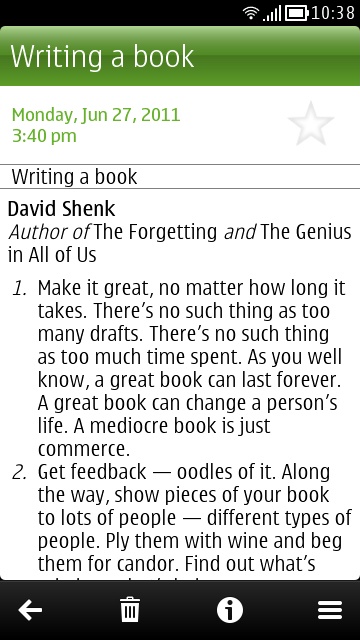 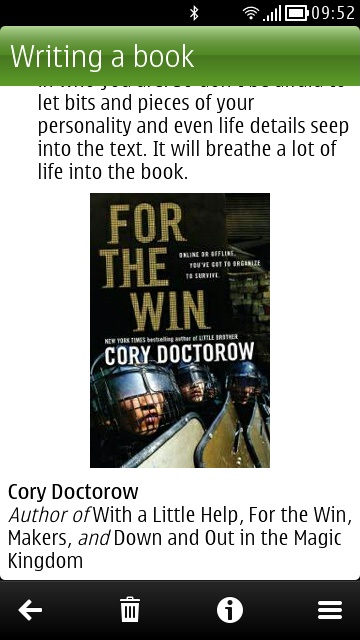 After being shut out of the world of Evernote for so long (years) on Symbian, it's simply great to be able to bring up my notes - you can't edit rich notes on the phone, there are just options to append text or edit the title, but it'll do me. 95% of my notes are created on the desktop, after all. 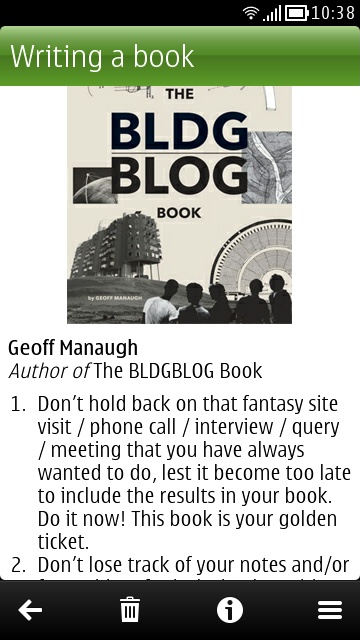 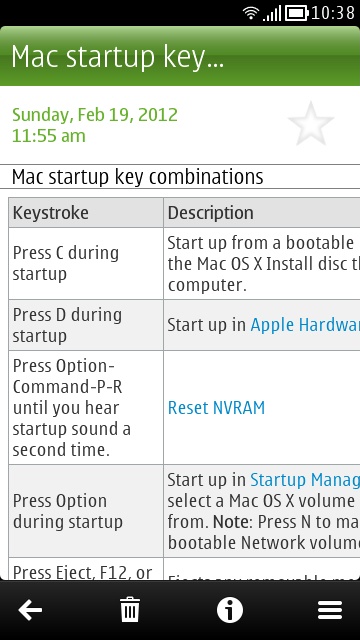 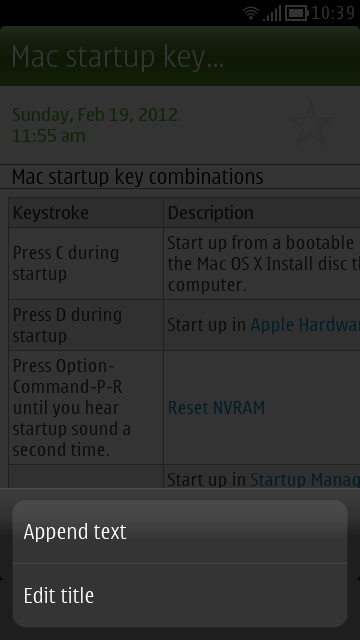 There's a good search facility, shown below, though note that to keep searching quick, only locally stored notes (i.e. created on the phone, favourited, etc.) are looked in, with an extra option to 'search all online notes' as well - something which you probably do want to do but which will obviously take longer to do.

Also stored locally are 'offline notebooks', a concept I found confusing - surely this duplicates the 'Favourites' functionality in terms of identifying notes that simply need to be stored locally for offline access?

Syncing happens when you create or edit a note, or when Notekeeper is started, plus you can force a sync from the Settings dialog. 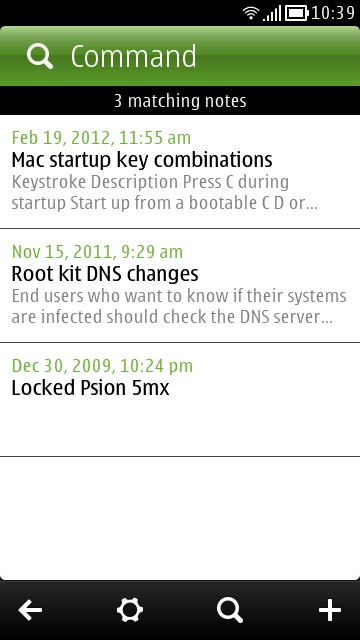 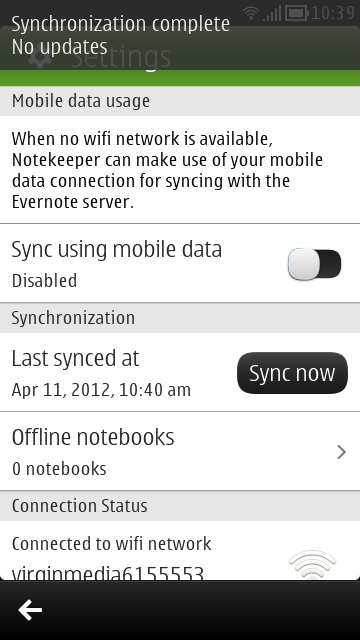 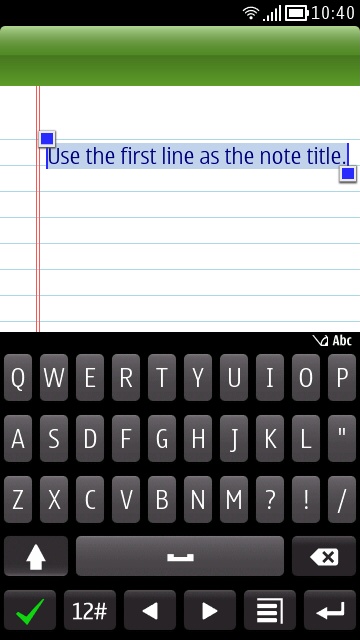 Notekeeper's UI is, on the whole, smart and modern - I especially liked the way the app switches to a side-scrolling note list when the phone is rotated to landscape mode. 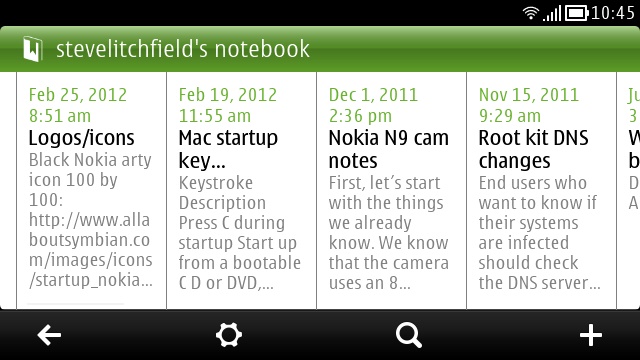 If you were in any doubt as to the degree of attention paid to Notekeeper by the developer, look at the home screen - as with the Nokia Store client, the 'close' icon is greyed out for a second and only then enabled. This is a clever (if only occasionally annoying) touch to stop clumsy 'back' taps going one step too far and closing the application by mistake. Seeing touches like this really inspire confidence in the developer, as do the detailed public changelogs he has produced in going from version to version.

Notekeeper has now joined Gravity as a Symbian app that I install on every phone - it's now slick and bug free and there's no reason why Symbian users can't use Evernote to track information and media in almost the same way that Android and iOS users do.