When writers dismiss the depth of the Symbian ecosystem (c.f. iOS), they're usually referring to 'branded' applications - there's certainly no shortage of utilitarian apps to suit most purposes. Scientific calculators being a prime example: there are dozens in the Nokia Store. I've picked a handful here from the latest new releases, but can any of them replace my 1977 Casio?

Available in free, Pro and 'Swype' versions (with 'nag' screens and some functional restrictions in the former), Qcal scores by being intuitive in how answers to calculations are treated. Essentially the last number on the main stack is either the starting point for, or the argument of, whatever function you choose next. So, for example, you've arrived at the value 0.063 and you want to know what angle this is the 'sin' of. Just tap the 'sin-1' button and there's your answer without having to start off with the function and then work out how to insert the number later. 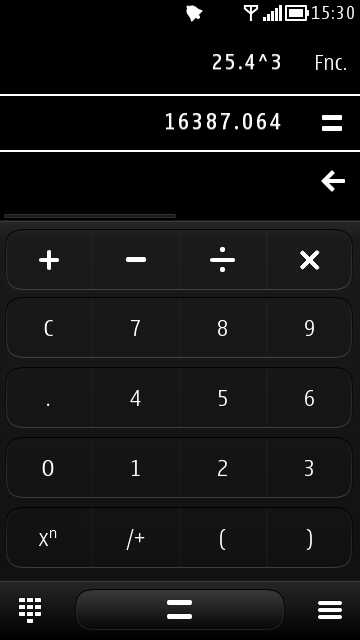 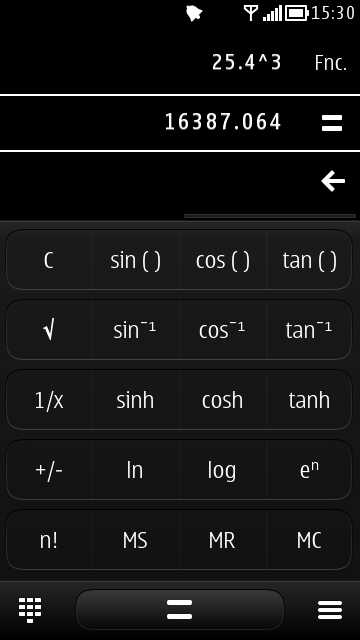 You can swap between two panels - the basic digits and arithmetic operators and a full-on scientific panel, with the latter sliding on smoothly in the 'Swype' version. Although there's the facility to include parentheses in expressions (i.e. put specific order in how these are evaluated), this didn't work for me. 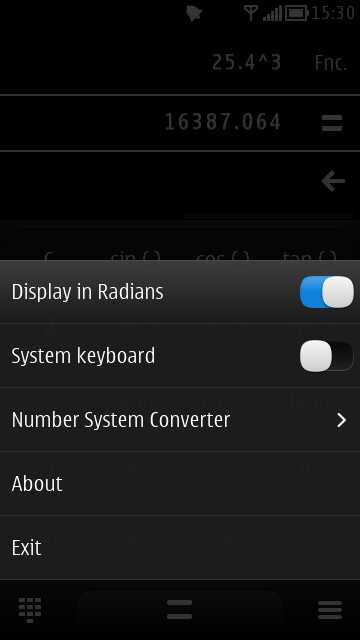 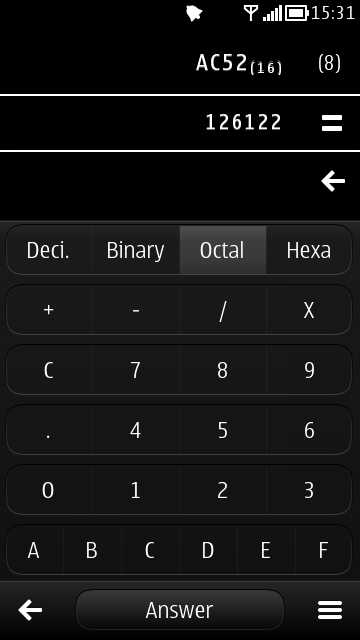 The main extra here, beyond being able to display radians or degrees, is a full decimal/binary/octal/hexadecimal converter, nicely implemented.

Like Qcal, this is written in QML and QtQuick, making it a little slow to start up (five seconds or so), but with a roughly similar AMOLED-friendly interface. The main keypad can be swiped left to reveal a scientific function pad or swiped right to show number system conversion buttons. Again there's the intelligence to apply functions with the current result as the argument and I liked the way the functions were written out explicitly in the main number area. Even better, they're all saved to a 'history' which can be brought up on screen as needed, in order to copy down an intermediate result. 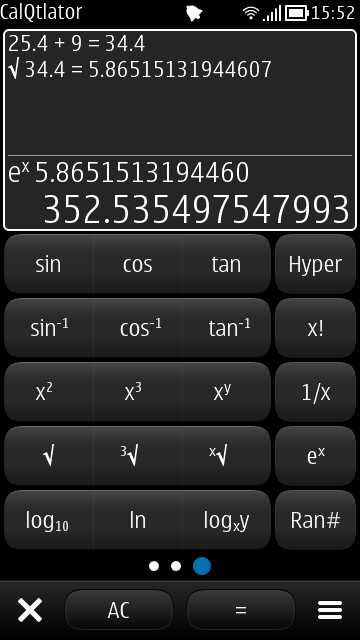 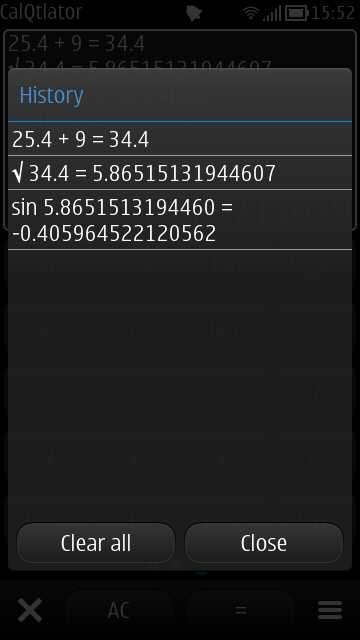 The number system conversion (e.g. to hex) worked well but was a little fiddly in terms of getting the order of button presses right. The 'Convert' button, strangely, isn't for the number systems but instead opos up a menu of common length, area, mass, speed and angle conversion functions. Always good to have, I guess, even if they took me by surprise here. 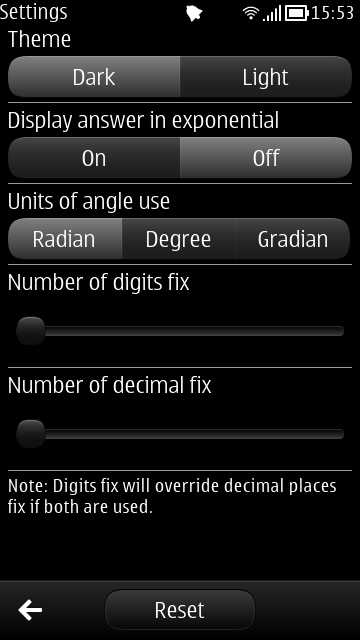 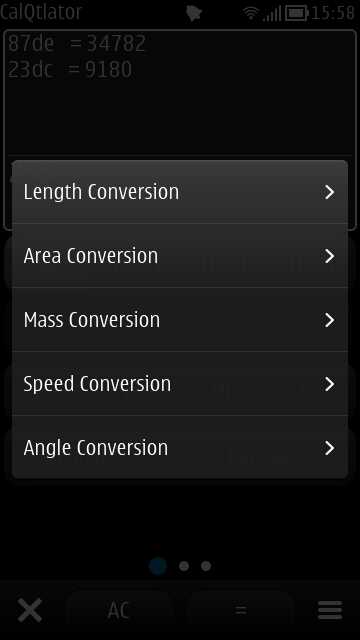 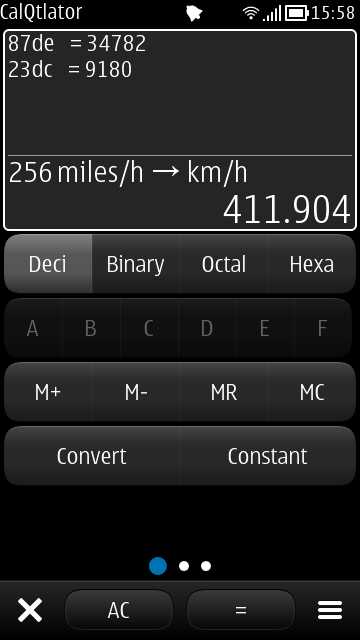 There's a comprehensive settings dialog too, including being able to choose a white theme if you prefer. Sometimes slow, sometimes fiddly, but you can't argue with getting a lot of calculation functions for free.

Uniquely among the applications here and written in native Symbian C++, Calc Pro impresses by both leaping into action immediately and also resembling the traditional scientific calculator, but the frustrations do creep in as you realise that each calculation result is held only in 'Answer' memory and not used by default for the next function. So, to use a previous answer, you have to tap on 'Ans n' and then tap on the answer number, in order to insert it. And you have to do it at the right place in the expression, so you can't just put in 'Ans 1 {square root}' - you have to put the elements in the correct mathematical order. Ten out of ten for accuracy but minus five for convenience in this sort of tool.

Such fussiness pays off when adding in longer expressions, mind you, with even the parentheses working well to separate out relevant parts of a complex expression. 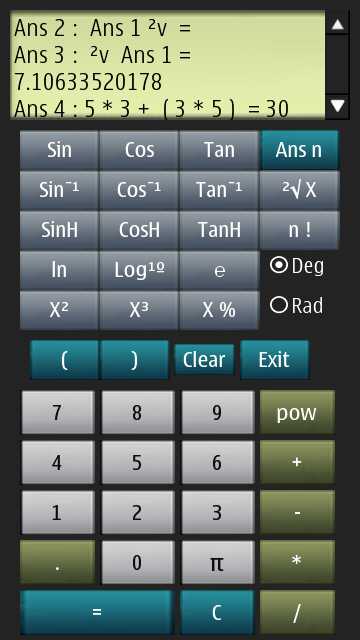 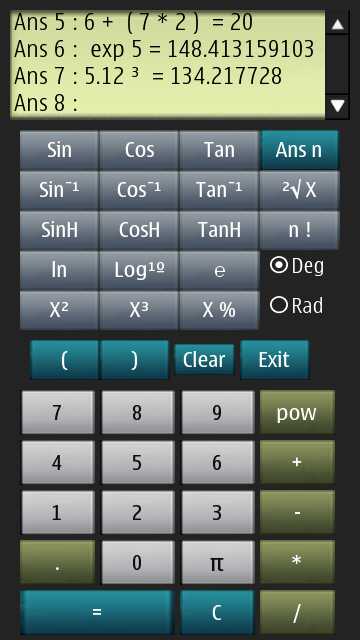 The interface is generally kept simple, I did like the scrolling answer sheet, though you can't swipe it, you have to tap on the up and down arrows. In summary, competent and powerful - but annoyingly fussy at times.

The most unfinished application in this roundup, CvbCalc shows its scientific mode when you rotate your phone to landscape mode - a nice touch but then it all starts to go wrong. Expressions to be calculated have to be entered perfectly, right down to inserting functions (e.g. 'srt') using a virtual cursor - that you can't see. At least on my default Nokia N8 theme, there's no flashing entity to give me a clue as to where functions and numbers should go. Tapping in the editing field brings up the standard Symbian text editing field, at which point you're on your own in terms of remembering syntax. 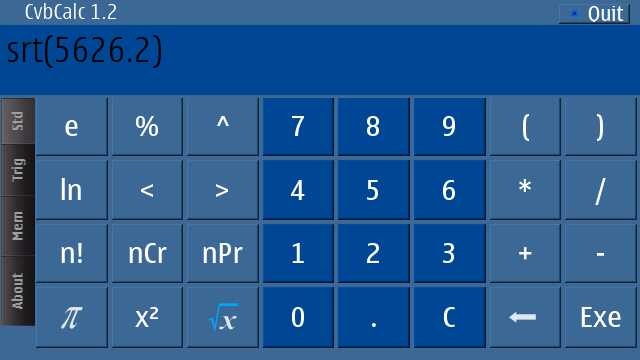 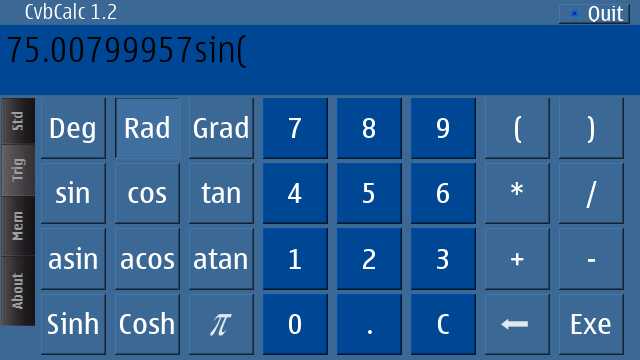 The concept of being part calculator, part expression engine, is good, but the implementation leaves a lot to be desired. Anyone interested in setting up complex calculation expressions should look at Calc Pro above or ProCalc5 below.

Advertising itself as '10 virtual calculators in one', ProCalc5 is a little disingenuous in its claims, though I'll admit it's by far the most powerful of the tools on offer here. And comes with a learning curve (and UI quirks) to match. Core to ProCalc5 is scripting, simple numerical programs in a Javascript-like language. There are plenty of examples available within the application but I'd still expect it to take the new user several days to build up custom scripts of their own.

Side swiping the different views takes you from traditional scientific calculator (with scrolling function bar near the top) to full on script editor (though for any serious editing work you'll want to edit the .SCR file on your desktop/keyboard), chart viewer, script manager, script loader/sharing tool, plus a huge Settings dialog, help and and About screen. I only make that eight screens, not ten, but I'm not complaining - this is one heavyweight tool. 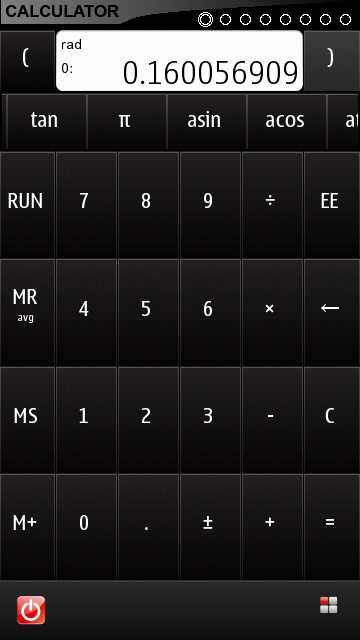 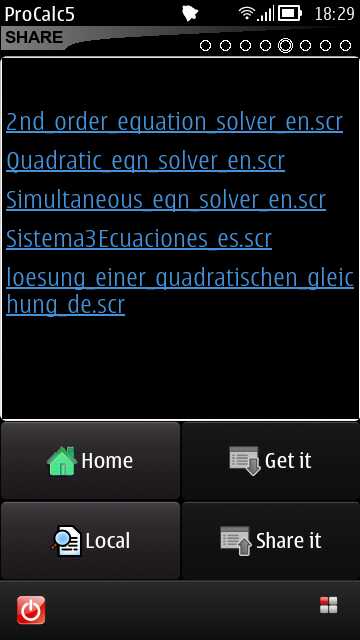 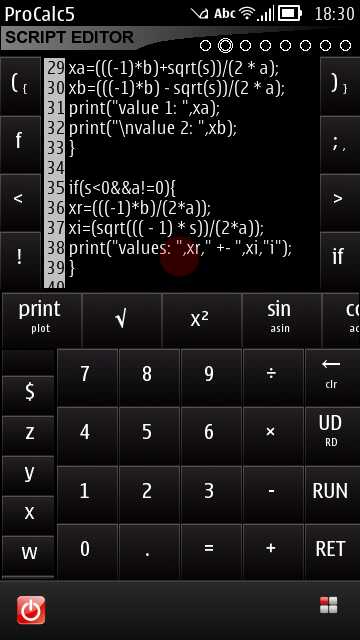 Potentially, with plenty of set-up, the most powerful calculation tool here by a country mile, ProCalc5 should also come with warning signs for the unwary. However, even if you just use it just for its first mode, as a scientific calculator with 'instant' results (as with Qcal and CalQtlator), it's still worth £1.

Steve Litchfield, All About Symbian, 13 March 2012