What’s cooler than low-temperature physics? Physics-based puzzle games on your smartphone of course! Think of games like Worms and Angry Birds – see what I mean? Yes, we all love physics simulations, even if we don’t realise it. Cut the Rope is another massively popular physics-based puzzle game where you have to swing candy on a rope into the waiting mouth of your pet monster. Read on to find out how well the game translates to Symbian from iOS and Android. 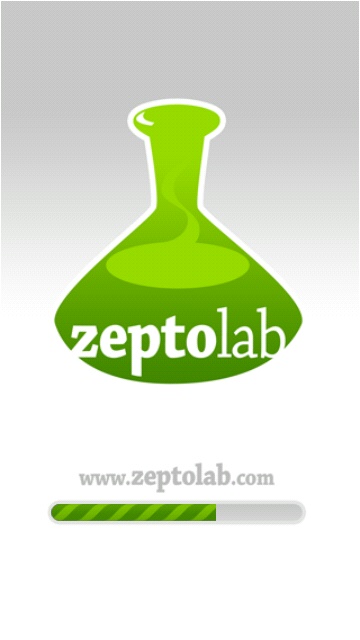 When the game is launched for the first time,  a short animation sets the scene of the game. As you answer a knock on your door, you find a box with a cute set of eyes peering out at you. Written on the box is just one instruction, “Feed with Candy”. You’d have to have a heart of stone to refuse.

It turns out that the creature you have to feed is a little green monster called Om Nom, who is so hungry that it isn’t safe to feed him by hand. Instead, you have to swing candy into his cavernously waiting mouth on the end of a rope.

Cut the Rope has been around a while with versions on iOS and Android, and even a HTML5 version, sponsored by Microsoft. The conversion to Symbian has gone flawlessly, with the look and feel being identical to earlier incarnations. That means the same adorable graphics and sound effects ready for you to enjoy in the Symbian version. In most games, sound and music do not add to the experience. In the case of Cut the Rope however, sound effects add to the expressiveness of Om Nom whenever you win or lose a game, and the music somehow keeps you engaged with what little story line there is to the game. 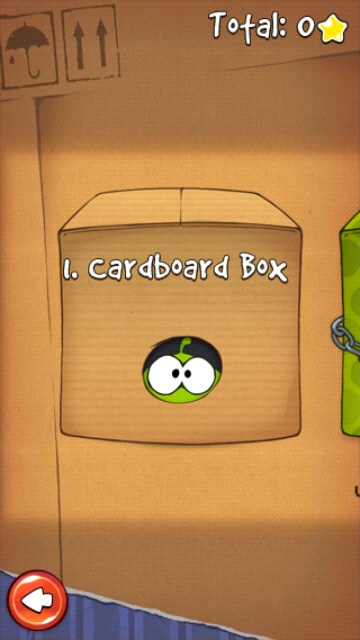 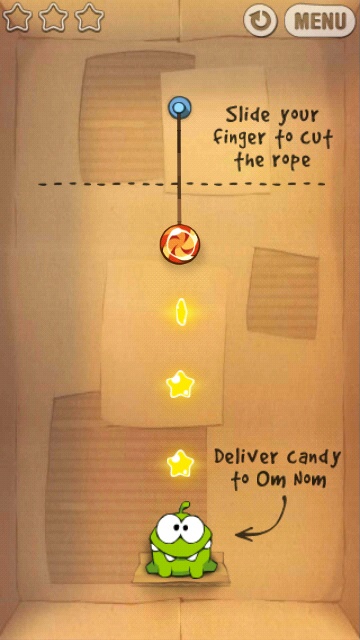 Cut the Rope has eight themed boxes, each with twenty five levels – forty in all. You can skip levels within the box you’re currently on, but higher boxes have to be unlocked with stars, which you collect during gameplay. Each theme also adds various devices to play with, such as bubbles to float the candy, and air puffers to blow candy around while floating or hanging. There are instructions in each level that introduce a new type of gameplay. The universal theme is fun and enjoyment though, which is why you can skip levels you just can’t figure out and want to come back to later. 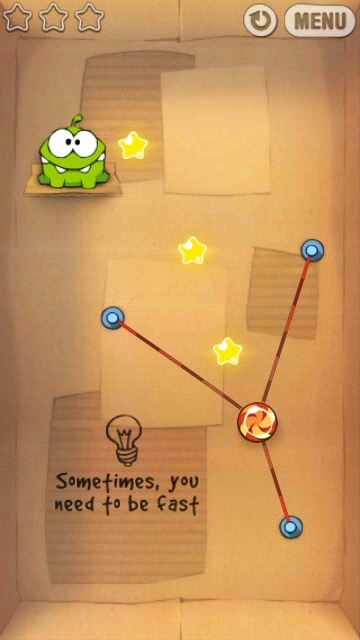 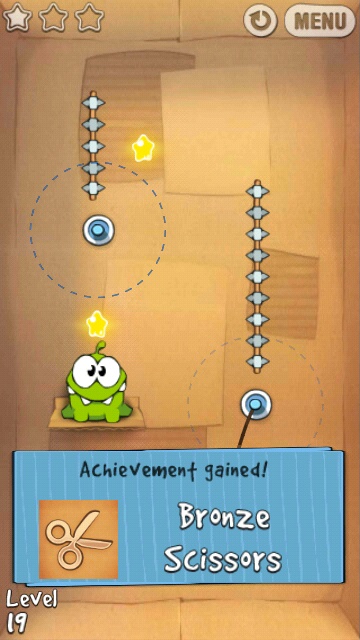 Cut the Rope isn’t just about doing tricks with more and more gadgets though. Many levels require you to use timing and momentum to complete the level. To progress from a level, all you have to do is get the candy into Om Nom’s mouth, but the trick is to collect stars by passing the candy over them. The more you collect, the faster you unlock higher levels. 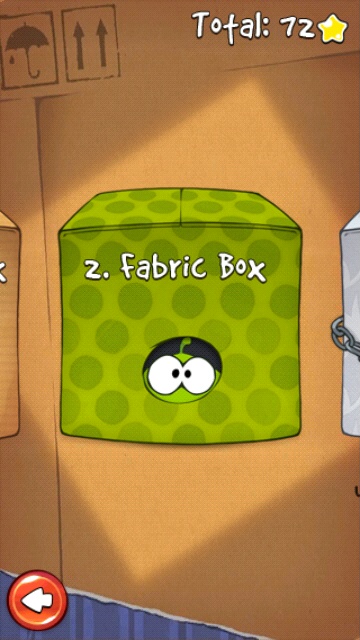 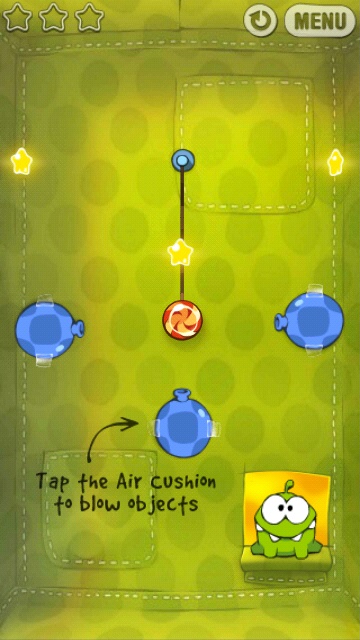 Moving on to the fabric box with its air puffers.

The elements introduced as you progress through the game are all meant to get you thinking, and should apply to anyone who used to play with string and rubber bands in their childhood! There are sliding tethers to carry the candy around. If the candy is hooked onto two ropes at once, you can slide them apart, until the rope turns red, which means the rope under tension. Cutting the rope releases all that energy and you the candy is fired like a shot. In the later levels you take to space and get to play with an artificial gravity field. In addition to these devices, there are hazards like electric arcs, and spiders that crawl down the rope wanting to steal the candy.

ZeptoLab deserve credit for keeping the gameplay of Cut the Rope fresh by varying the gameplay. It frequently switches between levels that take a lot of thought and others that take fast reactions. Even those types of levels are punctuated by fun levels that are there just for the sake of performing a cool trick.

The Symbian version of Cut the Rope is £3.00 on the Nokia Store.