Just because Quickoffice comes pre-installed on Symbian doesn’t automatically make it the best mobile office software. That’s the position taken by the Scottish software house, Picsel, with its Smart Office suite. It’s a favourite among many users for its impressive PDF rendering ability, but how does the rest of the suite stack up against Quickoffice’s free and paid for offerings? Find out in our review as we put not just one, but two versions of Smart Office to the test – version 1.8 for Symbian Anna, and version 2.0 for Nokia Belle! 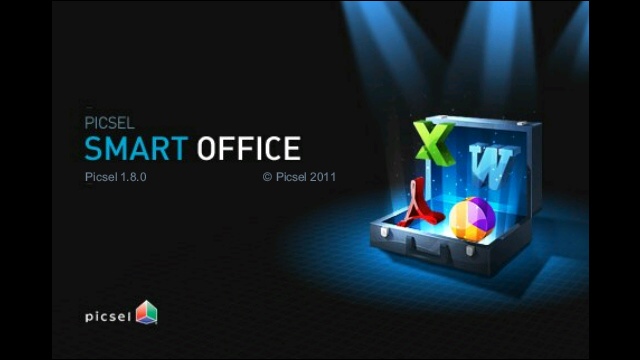 Smart Office is a huge application but Picsel has done a good job of binding everything together in a cohesive user interface. The hub of Smart Office is its file explorer which neatly displays your files and folders, along with your recent documents and cloud accounts on Dropbox and Google Docs. File management options are revealed by long-pressing on a file; allowing you to delete, copy, or rename. 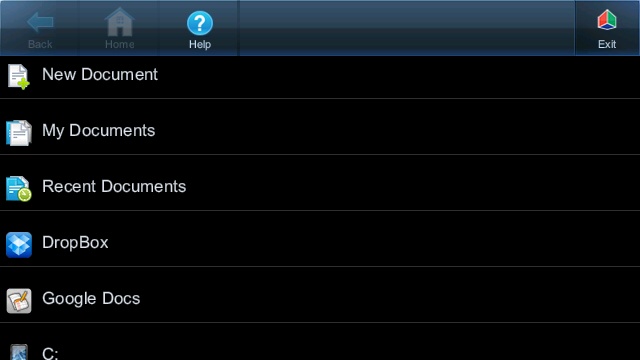 Smart Office supports the common pinch and stretch to zoom gesture. However, it takes this a step further by zooming out to a multi-page view which dynamically reorganises itself to make the best use of the screen area. Transitions between different grid layouts are visually engaging and give things an extra touch of polish. 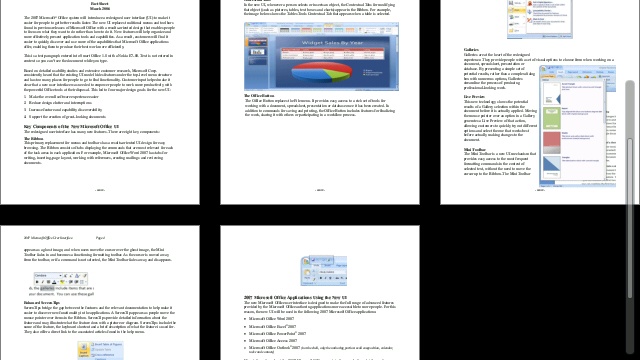 Zooming out to preview pages.

While viewing a file, a main toolbar can be accessed by tapping at the top of the screen, which lets you undo actions, save, and close. While editing, a secondary toolbar appears when you tap at the bottom of the screen which gives you access to all of the editing tools. 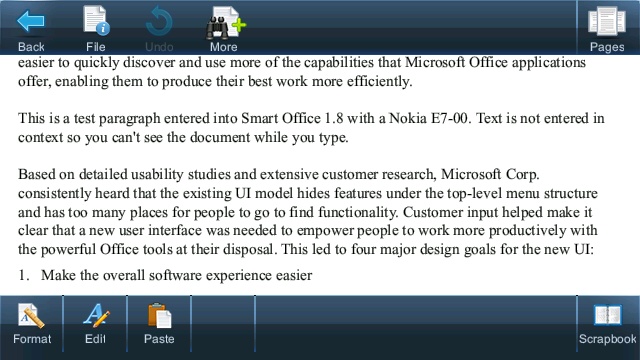 Across all three editing sub-applications, the editing toolbar gives access to a full set of font controls. There’s a good selection which matches the most popular fonts used in Microsoft Office. As you go through various sub-menu options for controlling the appearance of selected text, the split-screen menus allow you to see the effect of your changes. You can also adjust alignment, but there are no other options for paragraph formatting, e.g. line spacing, in any of the office editors. 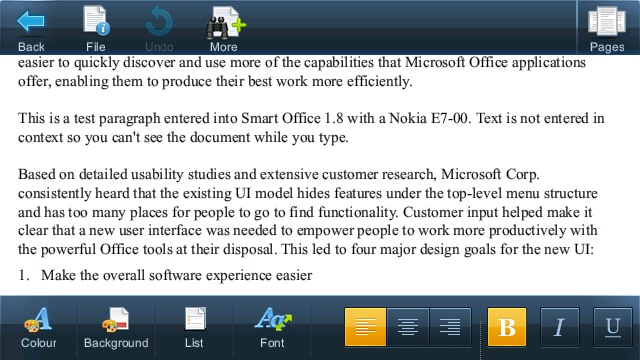 It should be noted, for the record, that Smart Office has an anaglyph 3D mode, which requires red and cyan glasses. This is meant to make text appear to float above the screen. However, we didn’t have any 3D glasses available to test this. This mode should not be confused with subsequent mentions of 3D page previews which, instead, use the graphics acceleration chip to render pages in a 3D space. 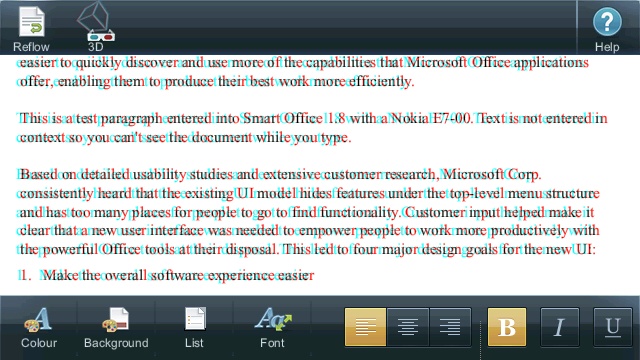 Text input is the least polished part of Smart Office, as it does not support the split-screen keyboard functionality introduced with Symbian Anna. Instead, a full-screen editor is called whenever you tap the Insert or Edit toolbar icons. This is unfortunate as it removes you from the context of the document.

When I asked Picsel whether this would be the case in Smart Office 2.0 for Nokia Belle, they said “This is unlikely to change in the release version, but the Symbian release of PSO 2 has not been finalised yet, and that is the kind of thing that might change”. 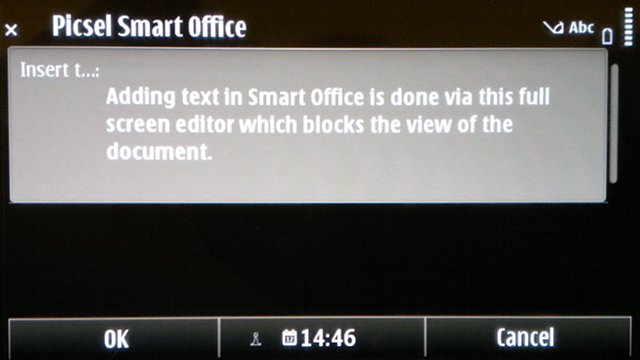 Picsel has adopted the modern method of touchscreen text selection by having handles for setting the start and end positions. This is preferable to how Quickoffice handles text selection, which uses cursor keys, rather than dragging gestures. In addition to the start and end handles, an extra handle appears allowing you to move the entire selection to another location in the document, which applies to text and images.

If you want to edit existing text, you have to select it as described above and tap the Edit toolbar icon. This then loads you into the full-screen text editor with the selected text for you to work on. 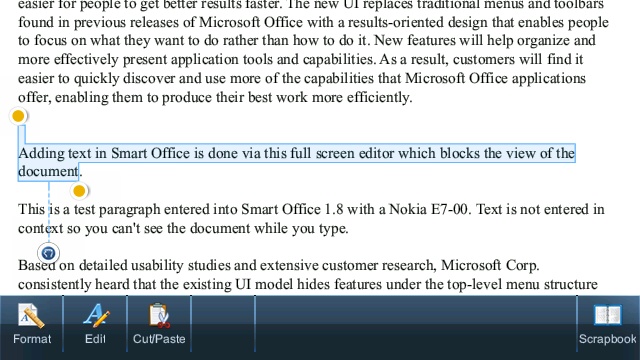 Smart Office supports cut, copy, and paste as you might expect. However, it has another feature called the Scrapbook, which acts as a secondary clipboard. After you have selected something, open the Scrapbook from the toolbar, and drag your content on to it. Since this metaphor was taken as far as having an image of a scrapbook and on which the selected content is shown as a glued-on clipping, it was surprising to find that there was only one scrapbook page to use – rather than having swiping gestures to turn the page and add something else. 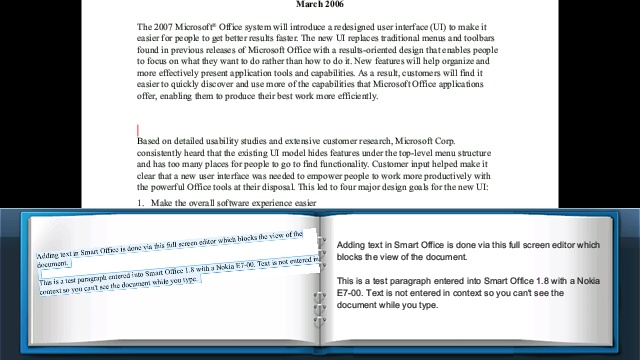 File compatibility on Smart Office is comprehensive, being able to read and write Word (.doc and .docx), Excel (.xls and .xlsx), and PowerPoint (.ppt and .pptx) files. It can also view images and PDF files. For this review, we hit Smart Office with a plethora of test files; almost everything was correctly loaded and shown. However, the test files included some .docx files (created in Office 2010) with images that were not embedded in the file, but loaded from the Web – they caused a “File not supported” error; it should be noted that the version of Quickoffice in the N8’s firmware would open those same files (without the images). We did also find an old PowerPoint file that didn’t load correctly, but our more recent test files were displayed properly. Excel files had the best compatibility ­– at least for simple formulae and charts.

The real test of any office suite is how well it preserves the formatting elements from desktop software. In our tests, we found that no formatting from Excel files was lost. The only element we lost in a Word document was a comment attached to a word, and simple PowerPoint files were preserved too. Not perfect, but overall pretty good.

The PDF viewer is really the best part of Smart Office. Its rendering is the fastest I’ve seen on Symbian – even outclassing Quickoffice’s PDF viewer. Where the PDF viewer falls down is on documents with several hundred pages, as it tries to load the whole file into RAM at once, rather than loading the next few pages from where you’re currently reading. However, single page documents which are highly complex (e.g. a city-wide bus map) loaded surprisingly quickly. 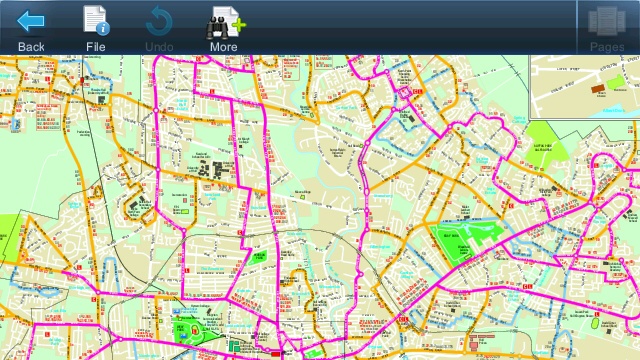 There is also a graphics accelerated page preview mode that lets you quickly flick through a large number of pages. The transition is a variation on the Cover Flow effect we see in the built-in Music application. 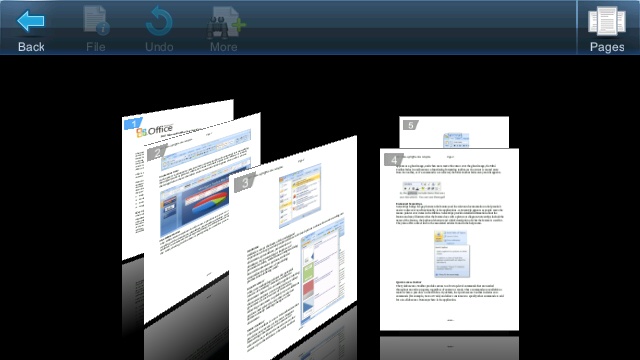 However, just like all the PDF readers on Symbian, the PDF viewer is missing a set of key features that should be standard. The most important of which is text reflow to make documents easier to read – especially in portrait mode. Resuming reading long documents (e.g. e-books) is made much harder as there is no bookmarking feature, or even a “jump to page” option. The latter is available in the Quickoffice PDF viewer pre-installed on all Symbian^3 phones.

The description of text editing above covered most of the word processor functionality. With version 1.8 of Smart Office, text editing is all that can be done. However, version 2.0 will add the ability to embed images. It should be noted that the current version of Quickoffice shipped in the N8 firmware (et al) can add images with ease already. 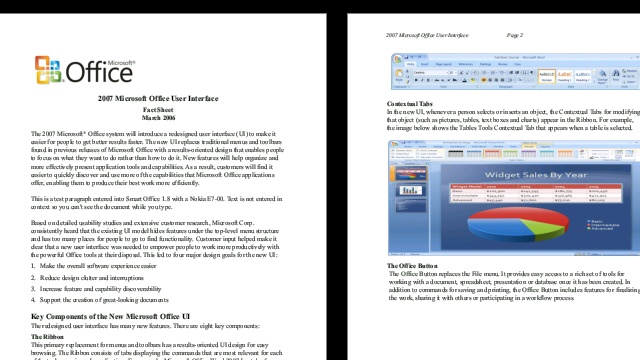 Images can be viewed, but not added.

Actually, the word processing features are very limited. You can create bulleted and numbered lists, and adjust text alignment. However, there’s no ability to insert a table, or adjust paragraph properties; nor is there a spell checker, word count, or print preview. Fortunately, you can “Save as” to PDF, and a pleasing effect is the same Cover Flow mode for pages as seen in the PDF viewer.

Quickoffice users will be familiar with the mobile view which makes documents more readable on their smartphone. Smart Office lacks this feature – documents are viewed just as you would see them on a desktop.

The spreadsheet sub-application is the most 'feature complete' part of Smart Office, and feels much more like a desktop application than the equivalent section of Quickoffice. This extends as far as being able to resize, split and merge cells – just like desktop spreadsheets. 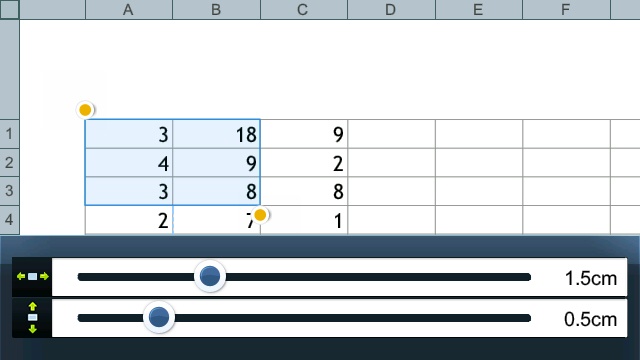 It is also possible to add and remove extra sheets, just as in a desktop application. These can then be swiped through in the 3D preview that is also used in the PDF viewer and word processor.

Of course, there are all the same formatting tools as mentioned in previous sections, e.g. font size and colour, but text alignment is available in both horizontal and vertical directions. The spreadsheet has a wide range of number formatting options, e.g. fixed decimal places, currency, dates, and even expressing decimals as fractions. 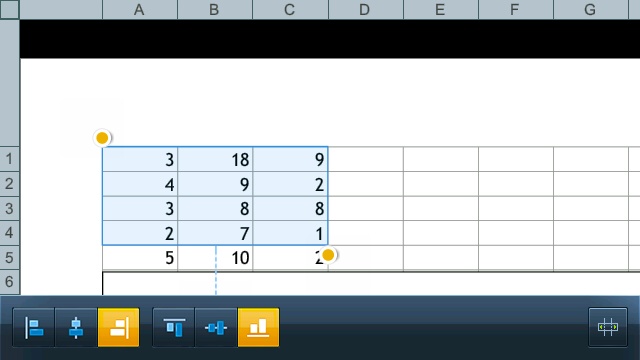 Since a full-screen editor is used, there’s again no way to have an interactive formula input or see the cells you’re referencing. This means you have to type cell references manually rather than being able to select with touch or cursor keys. Fortunately though, there is a library of functions which you can browse and add to a cell. 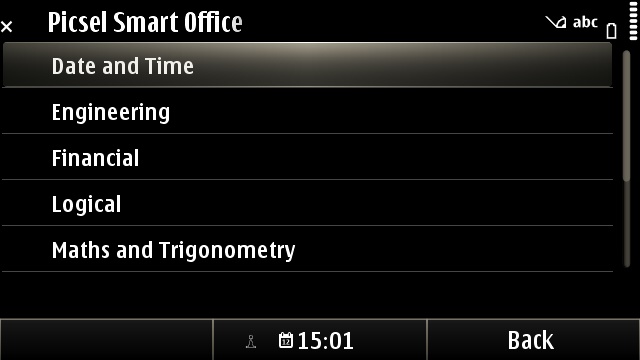 Pasting formulae is limited; for example, if you have a row you wish to copy and paste into the rows below, trying to paste all the columns at once did not work in our testing. Each column of formulae had to be pasted one at a time.

Furthermore, charts cannot be created, which is a shame. However, if you open a spreadsheet file that already has an embedded chart, Smart Office will render any changes you make to the source data.

The presentation editor of Smart Office is unfortunately less functional than its counterparts. When creating a new file there are four templates to choose from. However, there is no way to add a new slide, or change the background image. Nor can you add images – this is changing in version 2.0 (see the next section). In each of the templates, there’s a title page, and there are bulleted lists for you to amend on subsequent slides. 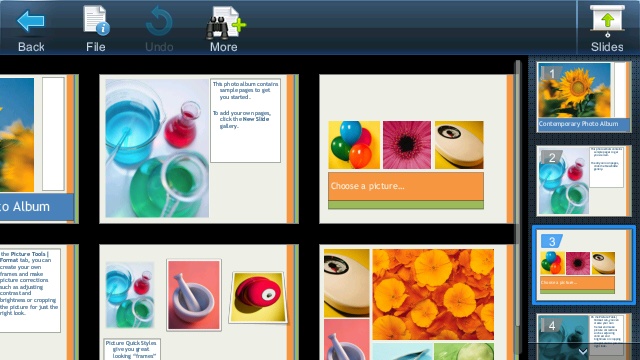 The current version of Smart Office is version 1.8 and is available for “legacy” Symbian Anna devices. Fortunately though, Smart Office 2.0 for Nokia Belle is on the way, and Picsel supplied me with a pre-release copy to look at during testing for this review. 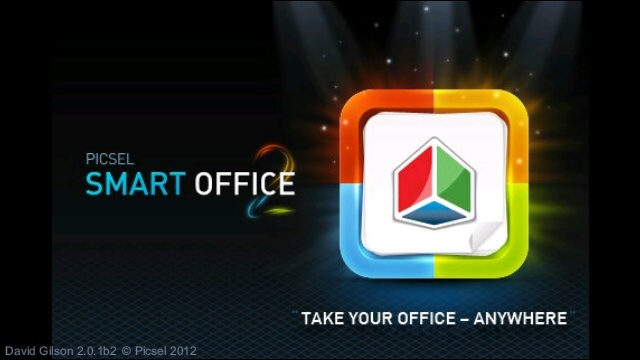 The new file explorer makes better use of screen real estate by rearranging file lists into two columns when in landscape mode. A widget, which slides in from the right, allows you to sort file lists according to name, date, size, or type. 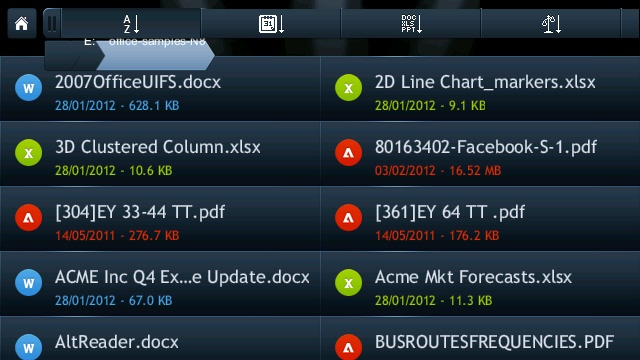 Cloud storage has been improved. When saving changes to files stored on Dropbox, the updated file is saved back onto Dropbox, so that the changes will sync across all of your associated devices. Some Google Docs users found that version 1.8 failed to login; this has been fixed in version 2.0. However, changes cannot be saved back to Google Docs. Instead, they have to be saved locally, which will spoil the experience of collaborating on shared documents.

Other minor changes include:

There were no apparent updates to the PDF viewer or spreadsheet sub-application.

When looking at any office suite for Symbian, one has to consider the benefits offered by Quickoffice, both the pre-installed version and the Pro version available for an extra charge. In terms of feature count, Quickoffice still beats Smart Office, and currently the Pro version is available for around £5.00 (73% off normal price), while Smart Office is £6.00 in the Nokia Store.

If your priority is more for PDF reading, the choice is less clear. Smart Office has the best performing PDF reader that we’ve reviewed, but it’s expensive if you’re only buying for that reason. It is cheaper than the Adobe Reader 2.5 LE upgrade from Quickoffice though, which currently costs around £7.00 (50% off normal price). However, Smart Office does not perform well with very long PDF files.

If and when Quickoffice returns to the full prices for its Pro upgrades (£32.50 for both), then Smart Office becomes a much more compelling option at just £6.00. However, regardless of the pricing, there are too many gaps in its functionality to win me over … for now.