Still, technically, in 'beta', and strictly for the graphics-accelerated Symbian^3 phones, Nokia 3D World Gaze is now mature enough to stand review - it's an augmented reality application with a difference, drawing on Panoramio, Wikinews and GeoNames public data sources to produce a genuinely unique view of our world. In terms of geospatial awareness (i.e. knowing where you are and what's immediately around you) it's totally the wrong tool - but for a beautiful, quirky and interesting look at the planet we live on, it can't be beaten.

I initially reported briefly on 3D World Gaze back in July, but we now have a more mature, more rounded application and one that's well worth walking through and summarising. Nokia still classes this application as "Experimental (Prototype that may change or disappear after the trial period)", but I for one think this should be 'graduated' into a Nokia Store freebie (along the same lines as Nokia Internet Radio and many others). 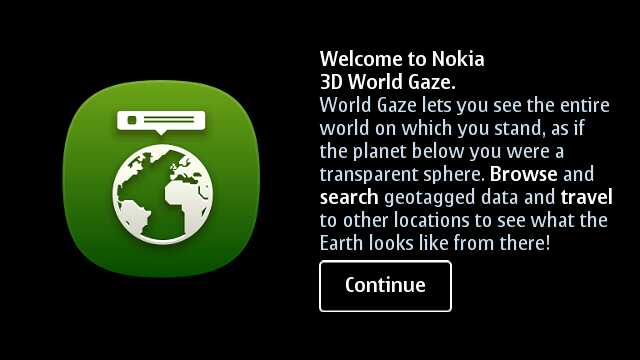 From intro screens to animations to interface, 3D World Gaze is a world apart (pun intended) from much of Nokia's software output - this is truly polished software and enough to impress even iOS and Android users, I suspect.

As with other augmented reality applications, the use of the digital compass will need five seconds of phone waving if you want to make sure that you're looking in the right direction within the application. If you've used the compass recently (say in Maps) then you can in theory skip this step: 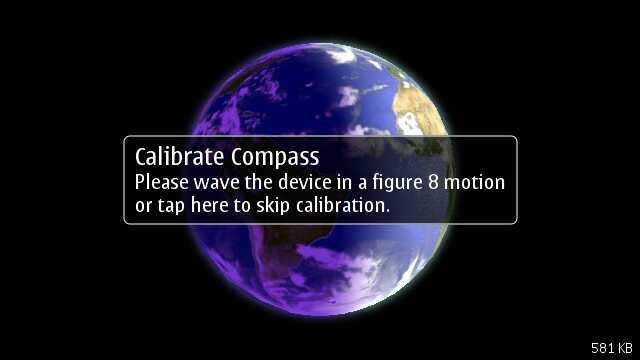 I loved the presentation at each stage, with introductory prompts to lead new users through functionality and with a prominent Help option: 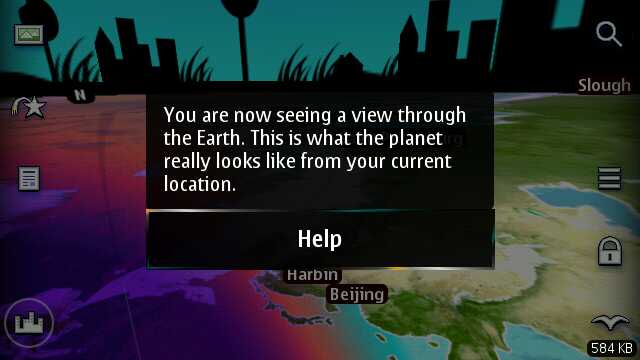 As the screen above shows, the idea is to present an augmented reality view on the physical planet Earth above, below, to the left and right of you, drawing on Internet data sources Panoramio, Wikinews, Wikipedia and GeoNames to position photos, news items, reference tags and cities (respectively) in roughly the right physical place in 3D space. Here's the basic cities view: (and yes, it's a little surreal seeing Slough mentioned along with Moscow, etc!) 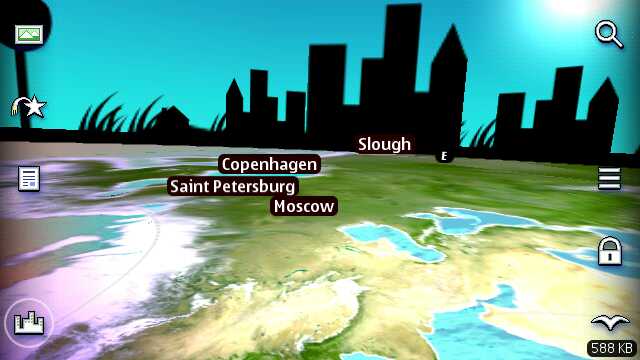 Note the side icon interface. Down the left are toggles for the various labels/data sources: Panoramio, Wikinews, Wikipedia and GeoNames. Just flick them on and off as you prefer. All the while, appropriate entries from each are presented in real time as you twist around and move up and down. Here are a selection of presented Panoramio thumbnails: 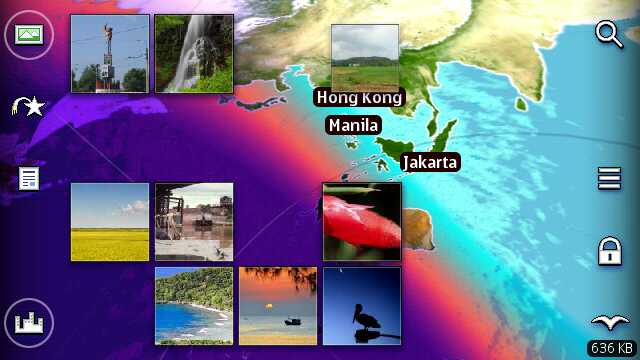 Tapping a thumbnail brings it up in larger form for admiring, for moving your 3D 'viewpoint' to its location or, perhaps most usefully, for bringing up the source image in context in Web: 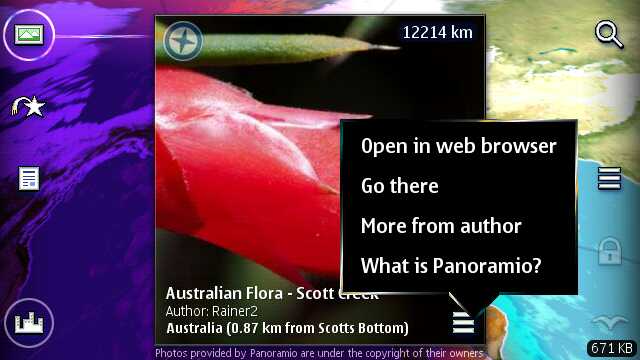 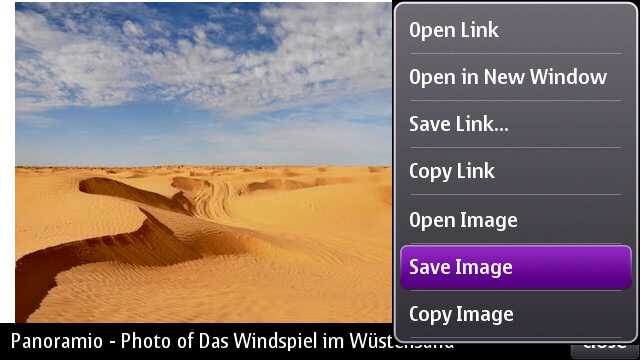 From Web, as shown above, you can bookmark the page or even save the image to a local disk on your phone. Neatly done. Panoramio was definitely my favourite data source from those presented in 3D World Gaze. The combination of the thumbnails plus the application's own real-time shaded globe affects was mesmerising: 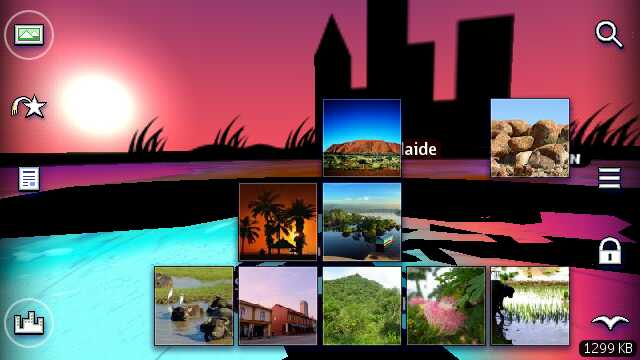 You can combine the left hand side feeds in the main view, as needed. Below, I've got all but Panoramio turned on. The right hand side icons are, respectively, to Search for a name, to bring up an extra options menu (Calibrate, cloud effects, go to my location, etc.), to disable compass response (so that you can spin the globe manually using touch), and to jump to a birds eye view in the clouds.

Not shown here but nicely done are left and right swipes from each screen side to 'pop up' extra options and relevant settings. 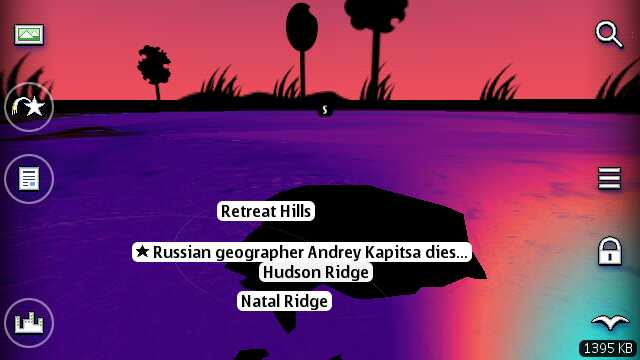 Here I'm looking at some fairly random WikiNews headlines, each geotagged and presented in (roughly) the right spot. Note also the neat way that sunlight is represented, with parts of the world that are currently in daylight or night accurately portrayed - this works in every view in 3D World Gaze: 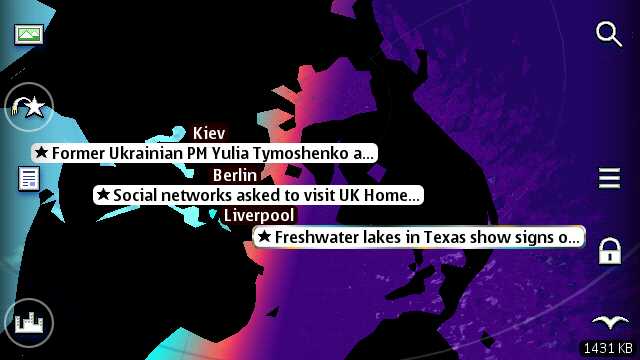 As before, you can tap an item to bring up details and then open it in the original web page, for full information and follow-up: 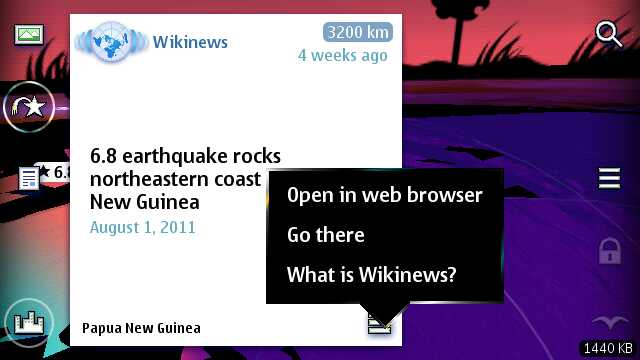 It should be noted that, throughout, everything's kept fairly crude - look at the straight line edges in the country outlines below. This is done partly for speed and partly to show that 3D World Gaze isn't meant to be an accurate geographical anything.... 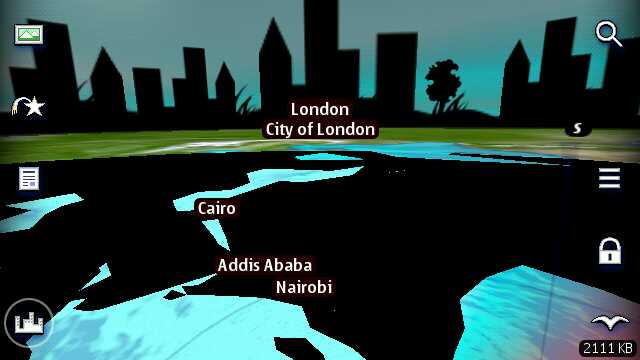 As a tool to look anything up, whether news or a place or Earth feature, 3D World Gaze is utterly hopeless. The way the Earth spins around you, often with precious few familiar references, is terribly confusing. And yet this free 'experimental' application from Nokia has me hooked. It shows what can be done with an augmented reality application that dares to think outside the box.

3D World Gaze also shows what Nokia's programmers can do in terms of an app's user interface when they're given the chance to really, really excel. For these guys' to-do list, I'd like to see a better Search system (matches are currently just shown as anonymous dots), I'd like to see camera and UI integration to allow users to contribute to each of the data sources used, and I'd (of course) like to see much wider device compatibility.

Please, Nokia, let 3D World Gaze graduate and not get dropped.... In the meantime, grab the SIS file while you can - just in case!