Engine noise roaring in your ears, the stereo pumping out tunes at full volume, scenery streaming past your eyes faster than you can take it all in, competing cars trying to knock you off the road, power up 'nitros' to collect en route, majestic scenery..... and normal urban traffic coming at you 'the wrong way' with every chance of an imminent head on collision at a closing speed of 300kph. Sound like fun? Or a nightmare? Either way, it's part and parcel of the Asphalt series and this is its latest and greatest incarnation on Symbian.

You may remember that Asphalt 5 HD was released in the first crop of 'HD' games for Symbian^3 phones in the Ovi Store, about six months ago. Ewan reviewed it and found it a 'nearly' game, with physics that was more arcade than realistic, with cheesy back story and limited difference between cars. He also found that it ran a bit slow and with less than perfect frame rate.

In short, '6' only really fixes the last problem, but the game has had a significant spruce up all round as well and the sum of the parts is that Asphalt's score is now a full ten points higher and the game much more worth recommending to others. It's still not a realistic representation of driving a fast motor car, but at least the graphics, glamour and garage glitz are now up with the other mobile competition (e.g. on iOS). 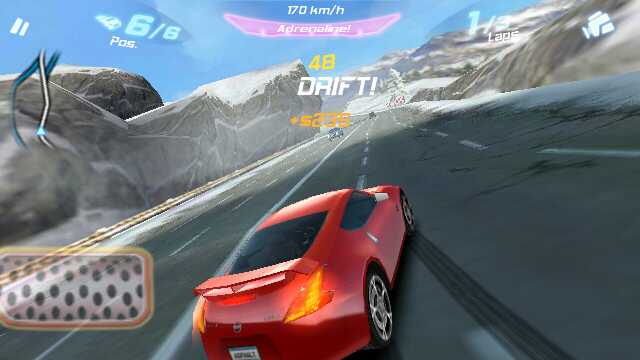 As usual, Asphalt is built around a career mode, in which you start with a handful of average cars and then gradually build up, through placing in races and achieving (usually violent) objectives, to unlock new circuits, new cars, new upgrades, and so on. A 'Free Race' mode is also present for those who simply want to while away a few minutes blasting along at 200kph. 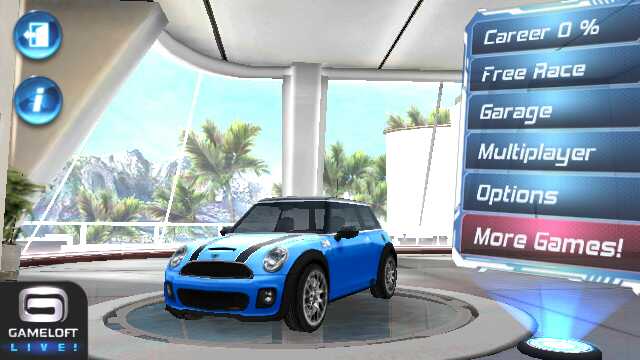 The various race types (you'll encounter each as you work your way through a career) are shown below. The first and second involve (ahem) violently nudging competing cars off the road, something you'll get used to in Asphalt 6 HD. 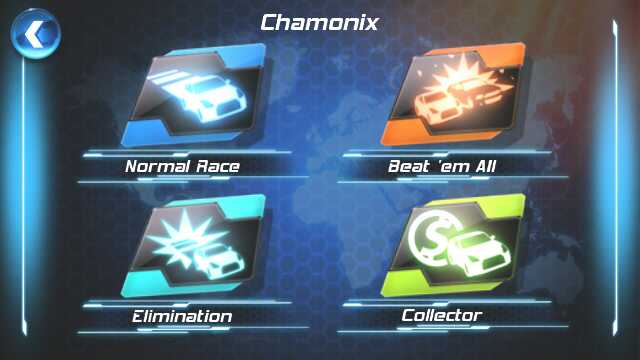 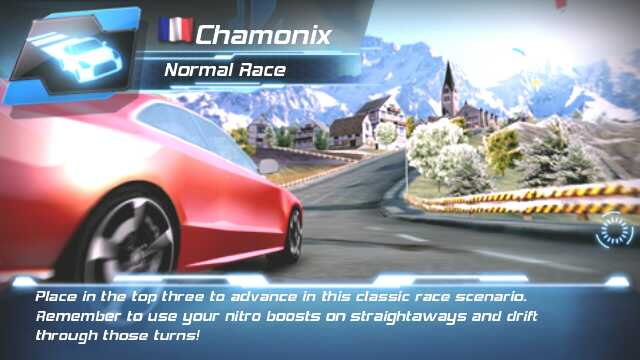 But let's not get ahead of ourselves. The level of slickness on offer here is very high. Mimicking Asphalt on other platforms, the game opens with a pre-rendered video sequence to set the atmosphere (this can be tapped through to skip it after the first few watches): 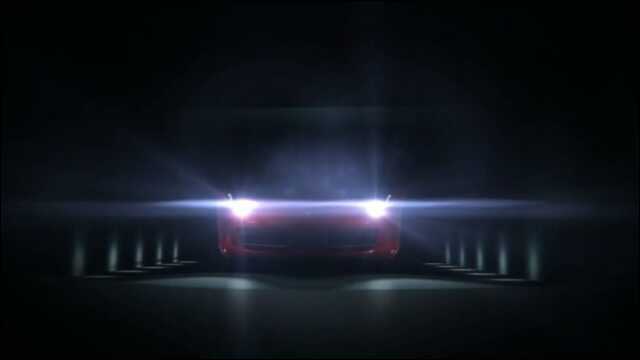 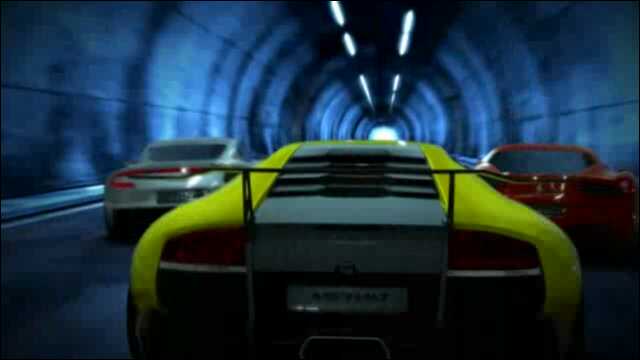 Interestingly, the level of detail in the video sequence isn't that much higher than in the game's 3D world, we're getting to the point with these titles when everything that needs to be shown can be generated and rendered 'on the fly'. For example, at the start of each race, such a sequence (including your chosen car and graphics scheme) is created and rendered - here are few screens from such an example: 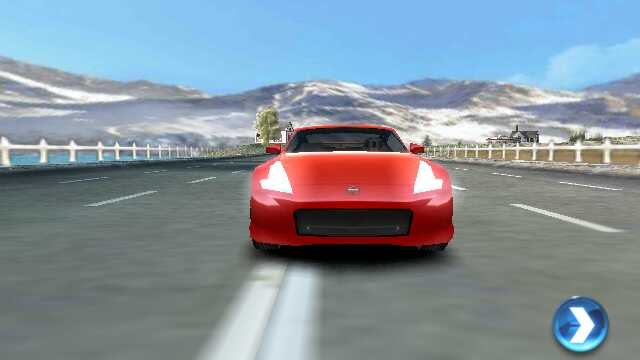 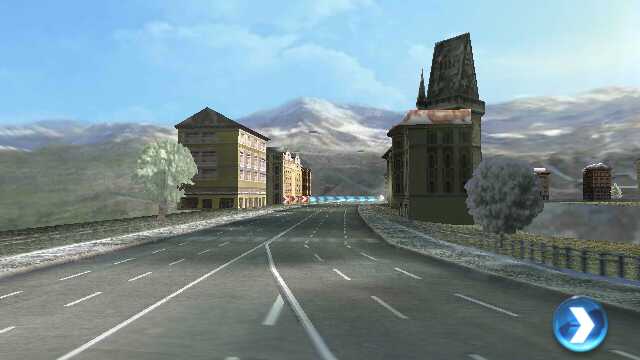 I mentioned above that your car can be heavily customised. After a while, you'll be able to boost its performance and durability, but initially you're limited to cosmetics, such as a new paint job: 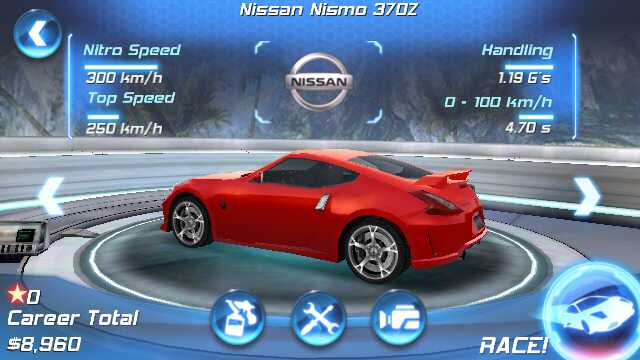 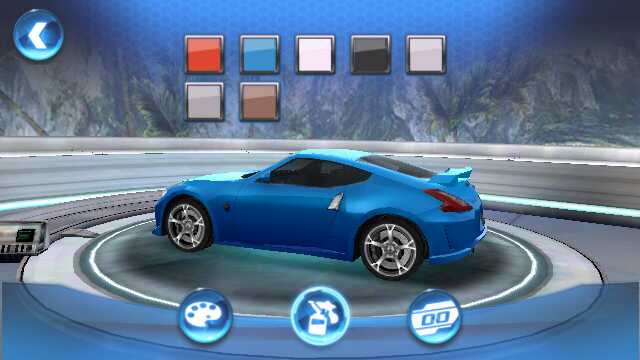 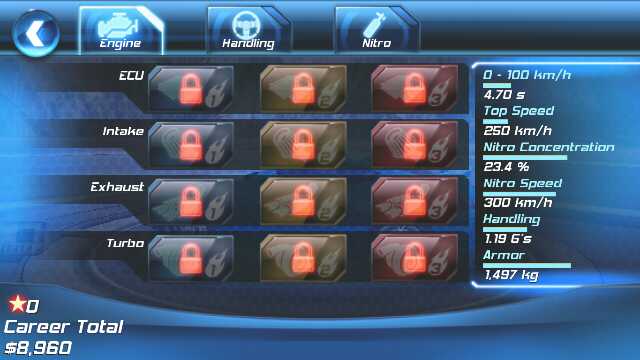 At any given time you've got multiple cars to pick from. These get parked (logically) in a garage. In fact, a high tech garage that you can look around in pseudo 3D, with Gameloft using their 3D technology from other games to good (if slightly trivial advantage): 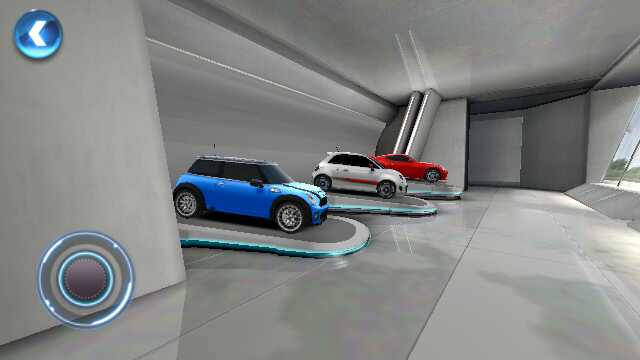 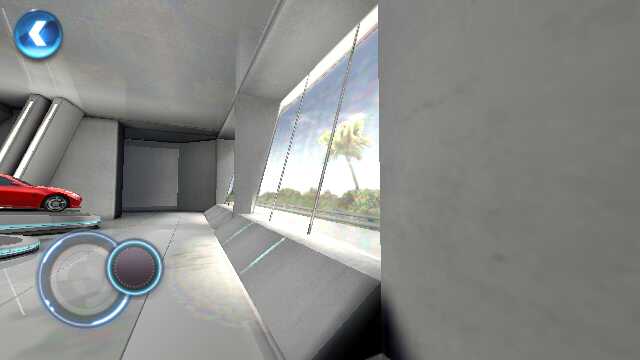 So, no shortage of eye candy then. And no shortage once you start racing either. From snow capped mountains to sunlit skyscrapers and with plenty of sophisticated lighting effects, all passing by at full frame rate, Asphalt 6 is an excellent demonstration of what the graphics acceleration hardware in Symbian^3 phones can do. On the N8, C7, E7 and X7, the game is graphically stunning. Even little touches impress - like being able to put down tyre marks on the track that stay put, while you drive back over them later.

Occasionally, just occasionally, you can see scenery being drawn in the distance, but it's not a problem in normal games. 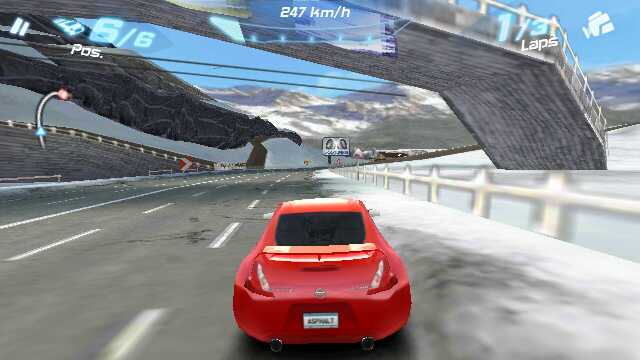 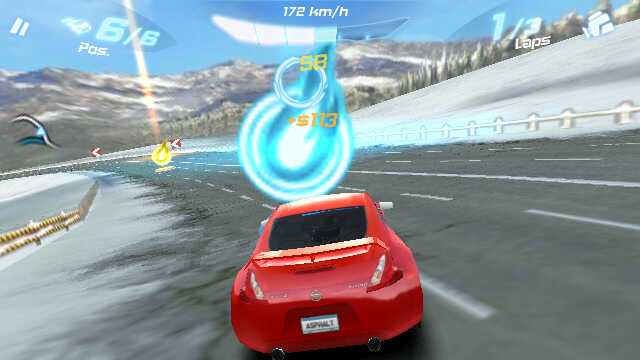 Powerups are hanging over the track, roughly on the racing line and it's usually easy to pick them up. Activating them later (usually on a straight) is by tapping the right hand side of the screen. Space and time then become somewhat fluid (anyone remember the TV series 'Street Hawk'?) and you're zooming along the track with only minimal accelerometer steering input needed.

There are in fact two sorts of nitro power ups - combine them (it's not entirely clear how) and you get a dramatic neon super-speed effect, as shown below. 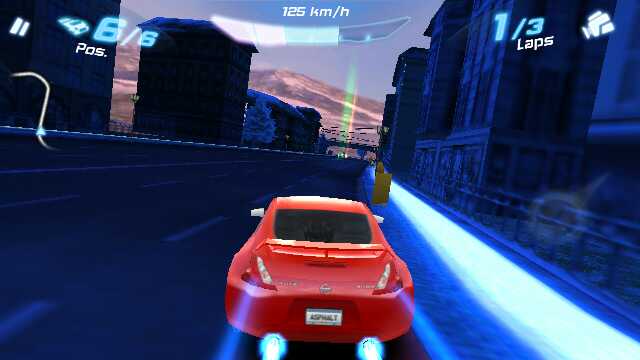 Tapping the left hand side of the screen acts as a brake and is best employed for forcing the car into an artistic (and fun) 'drift' through a corner. You can make most corners at full speed with just accelerometer steering, which is rather unrealistic, but you'll want to do plenty of drifting and sliding if you're in Asphalt 6 HD's target 'boy racer' market, I suspect... 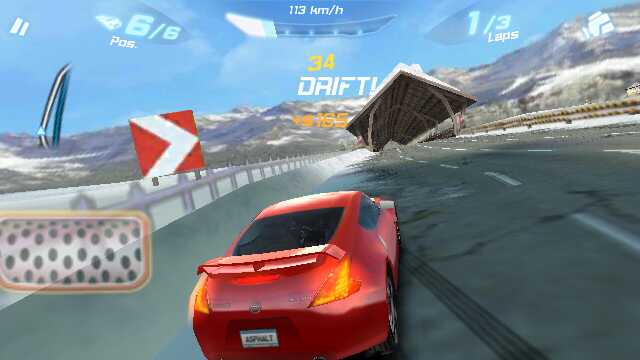 A head on collision with an oncoming truck at these insane speeds is certain death in the real world - here in Asphalt 6 HD it just means a dramatic slow motion 'damage' sequence lasting a few seconds and then you're back on the road as if nothing had happened. This is arcade land, remember, if you wanted realism you wouldn't be playing a game which saw you racing against oncoming traffic (for extra thrills) in the first place... 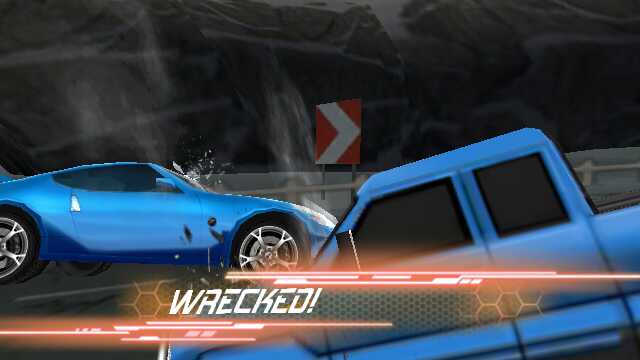 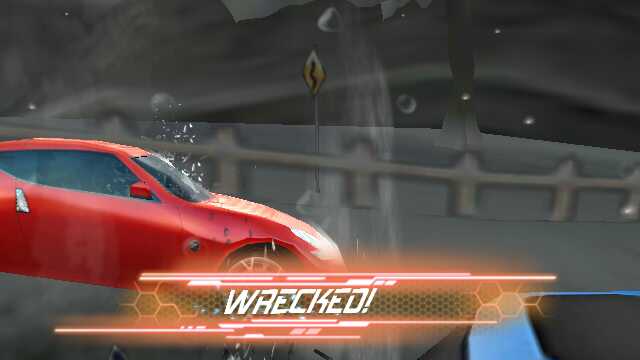 You also get slow-mo sequences when you eliminate an opponent by veering into them and forcing them into the track sides. It's quite easy to do and thankfully the other cars seem less robust than your own. 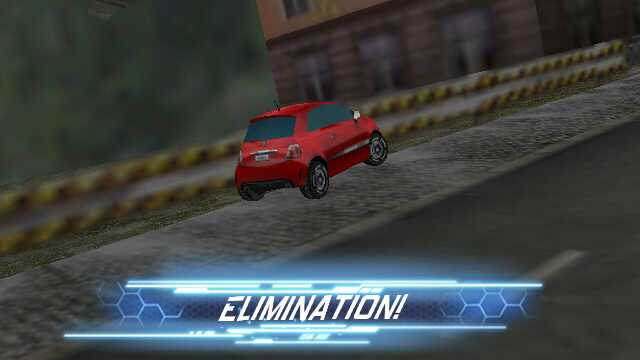 So, what of the racing? I've driven at 120mph (around 200kph) in real life and the speeds here look about right, in terms of movement through the wonderfully rendered scenery. But, as Ewan observed in looking at prevous versions, the feel through the corners is all arcade - there's little sense of mass and momentum. Scraping a barrier or smashing into lamposts doesn't usually slow you down at all and in fact sometimes gets you extra credits ("Urban havoc" etc.)

The overall difficulty level is, if anything, geared towards beginners, in that even with a few crashes along the way, judicious use of the nitro boosts can get you into a placing position fairly easily. But there's plenty of gameplay ahead of you in career mode, with "opponents in 11 different leagues with 55 events". Not bad value for £3. 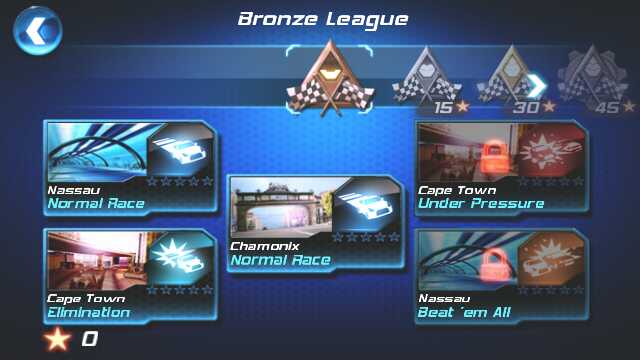 But there's more. Quite a bit more, in fact. Even supposing that you make your way through all 55 races in Career mode, there's genuinely unlimited gameplay by introducing real, human opponents with a great Multiplayer mode. Comprehensively, this includes both local multiplayer via Wifi or Bluetooth and online, playing people across the world. 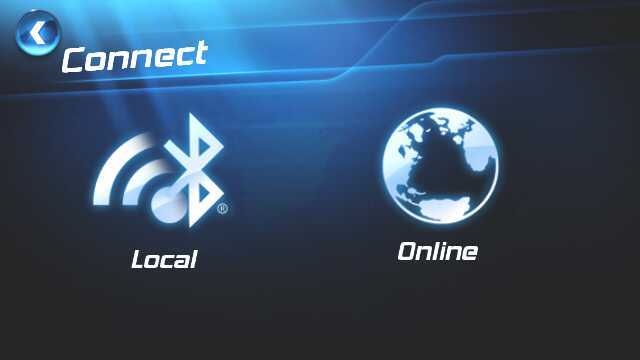 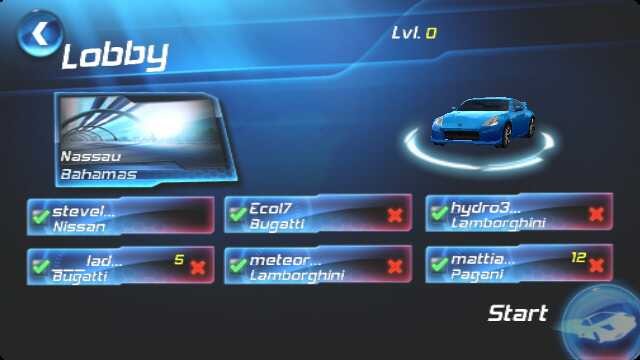 It's not entirely clear whether your opponents are also playing on the Symbian version or on a generic copy of the game on a console or other mobile platform - I suspect the latter, judging by both the way the Lobby filled up within seconds (i.e. there must be thousands, or even tens of thousands of players available at any one time) and the way that I got my gasoline-scented butt well and truly kicked each time. 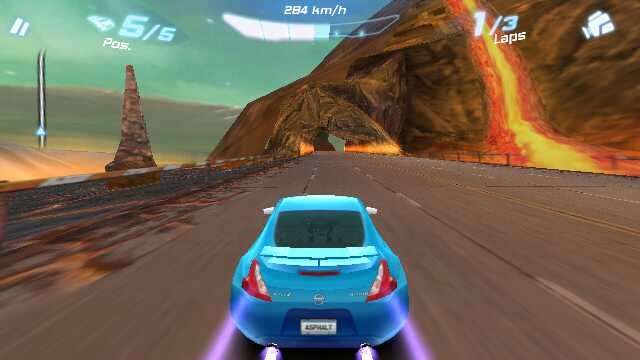 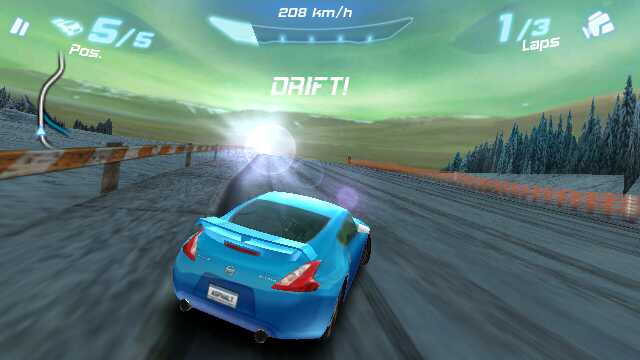 Asphalt 6:Adrenaline HD is a stonking 255MB slice of graphics-accelerated petrol-head arcade action and is the best Asphalt yet - by miles. That it bears little relation to actually controlling a real car at 200kph+ is irrelevant to the game's target market. This is fast, furious, gorgeous, action-packed and an awful lot of fun. At £3 in the Ovi Store, it's also terrific value.