Started in Amsterdam in 2009, Layar is an award winning mobile browser, specifically geared towards augmented reality and presenting location based information on the screen of your smartphone, mixing real world views with data pulled in from a number of sources. Now available on Symbian^3, Layar is an application that is far more than a test-bed prototype. Layar has been out there for two years, in the real world, helping people find out what is around them. It's a glimpse into a world that's been promised by science fiction, and while it might have some teething problems, Layar is still a great example of what a modern smartphone can do.

So how does it work? By taking in all the data from the sensors on your phone, but primarily the GPS and location features. The GPS to work out where the phone is in the world, the digital compass to work out where north is, and the accelerometer to determine the orientation of the phone. Finally, all that location information is combined with the view from the camera, so that Layar knows where it is in the world it is pointed. 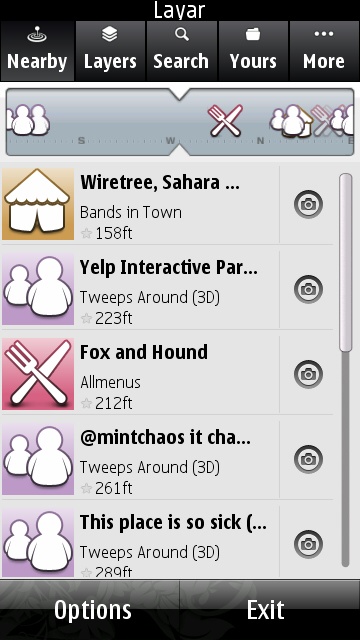 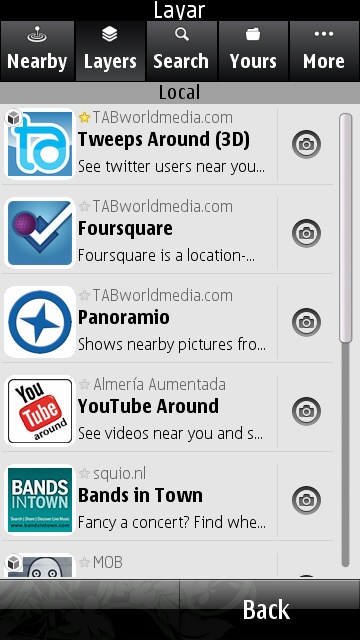 That alone is an impressive feat. From switching on, it takes a short amount of time to sort out all this data (this is mostly the time taken to get a GPS lock) and then the fun starts. Layar is essentially two applications. The first, as described above, is the engine which determines your location and orientation. The second takes that information and pairs it up with the rich vein of location-based data available on the Internet – and these are the 'layers' that give Layar its name.

Run Layar and you'll be first asked to wave your phone around in a figure eight pattern to reset the sensors in the phone and give you the best experience. You'll then be presented with a tabbed view to set up and explore the layers available to you.

First up is the 'nearby' tab, which provides a paper strip that moves around with you and a list of some of the nearest points of interest  to you. To be honest, this is one of the best views of Layar – it's clear in the information that is displayed, with a compass style ticker showing in which direction elements can be found. What it doesn't show is the augmented reality aspect.

That comes once you select a specific layer from the rest of the tabs along the top of the screen. The full index of layers is the second tab, and a search function for (currently) over one thousand layers is next in line. Those you have selected are under the 'yours' tab, and selecting one of these to open will bring up the magic of the augmented reality. 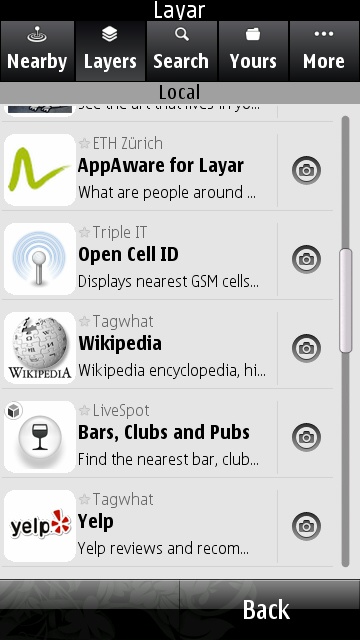 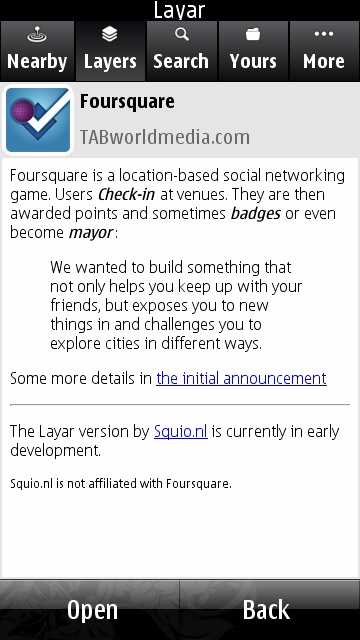 On screen will be the view through the camera of your smartphone, your window on the world. You'll spot a radar like graphic in the top right of the screen. This shows you where the items in the layer are around you. Hold up the phone to look straight out at the world and not only does a little icon come into view as you turn around to show you where something is, but an extra dialog of information also appears that also has hyperlinks to take you to more actions (such as the review page, 'checking in' to the location, starting a phone call, or whatever else makes sense for that layer).

One of the most important tweaks you can make is range - the distance the layer can 'see' from your handset. Back in Edinburgh, I can comfortably leave the range set to around two miles on most layers and not suffer any information overload. But in the halls of an internet conference (such as the recent South by Southwest Interactive, which I attended) the range needed to be reduced down to a hundred meters or so simply because of the density of information in layers such as 'nearby tweets' and 'local pictures'. This can prove quite a challenge when exploring large data sets, but for points of interest, tourist attractions and local services, you can keep a long range and they are still easy to use, and practical as well. 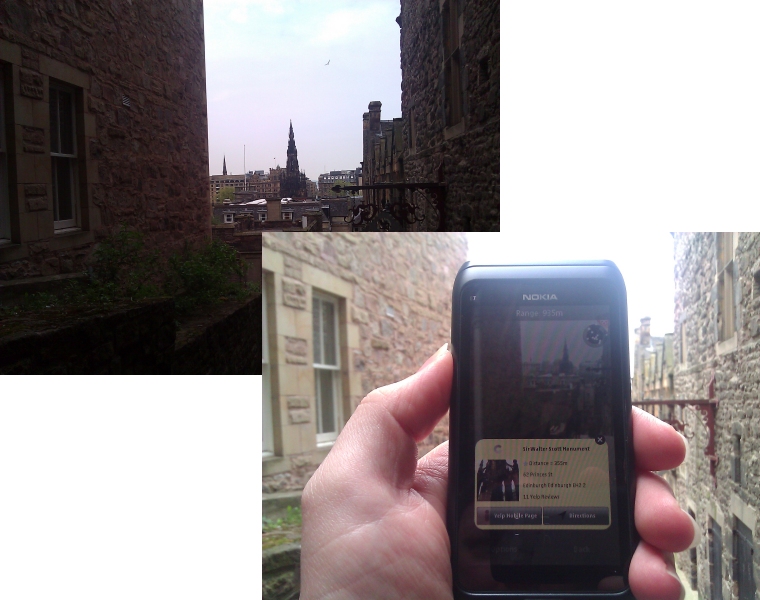 Layar in action around Edinburgh - the big tower is correctly identified as the Scott Monument.

Be warned though, Layar can pull down a lot of data. For example, looking at people posting Twitter updates around you overlays their avatar where they are located. Lots of people in view means lots of avatars, pictures and information. That means lots of mobile data. Not a problem if you're on Wi-fi or on an unlimited data plan in your home network, but a serious issue if you are on roaming data while abroad or staying within a small data limit to keep costs down when travelling.

The one caveat I would raise is this. Layar is only as good as the data that is fed into the system from the layers, many of which are independent of Layar. In some cases these are exceptionally useful – being somewhere new, calling up a layer of restaurant reviews from Yelp and using it to decide on your evening meal (and then seeing where to go) is both simple to do, yet one of the coolest things to be seen on a smartphone.

Then there are other layers where the data is incomplete or not accurate enough in itself. The Foursquare layer would seem to be a perfect fit, but a number of locations were in the wrong place at SXSW 2011, while other trending (popular) Foursquare venues in the area simply did not show up. Layar can only be as good as the data that is provided. So poor data can lead to a poor experience, while great data can make Layar, to paraphrase Arthur C Clarke, indistinguishable from magic.

Layar is a fascinating application that continues to grow both in scope and usefulness. I still think it's very much a bleeding edge application, and as such would appeal to the people who are always looking for cool things for their phone that have a practical use.