Need more Facebook, Twitter, LinkedIn and FourSquare from your phone? Nokia's Social Networking application not doing enough for you? Then have a look at Socially, a social network application that covers the main networks in a consistent interface on your Symbian smartphone. Having spent some time with it, it might be a touch idiosyncratic, but the interface is consistent, it gets the job done and it has a number of deep integration features which are innovative on Symbian. 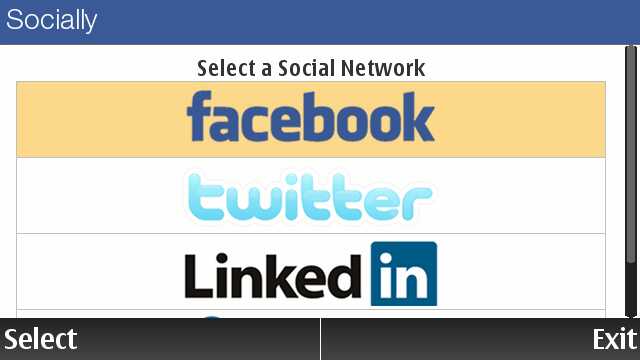 After a free download from m.socially.com (the app is not yet available for all phones in the Ovi Store), you'll be asked to authenticate your presence on various social networks. It’s nice to see the now-familiar “Login via Facebook” button that opens the browser, passing you to Facebook for authentication. That’s far better than just handing Socially your password, because (a) you don't leave your password in the application and (b) at a later date you can revoke the access of Socially, if it misbehaves, if your phone is stolen, or any other reason you don’t want the application to carry on looking at your social graph.

OAuth, as described above, where you give permission for an app to use your data, is also used in the other networks (Twitter, LinkedIn, FourSquare and the aforementioned Facebook) which gives a certain amount of confidence that Socially is going to be a sensible application. 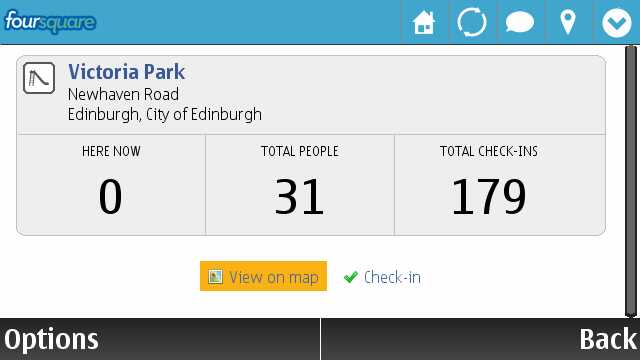 Once you’ve logged on to the networks you want to use (which takes a surprisingly short amount of time to set up) you’ll recognise the big strength of Socially – the consistency in the interface over the different networks. It shows the “ribbon” of status updates and information which you can kinetically scroll through; along the top, you have buttons to return to the Socially home screen, post your own updates, and a drop down button to access other views of a network – in Facebook, this might be your notifications or recent photos from your friends. 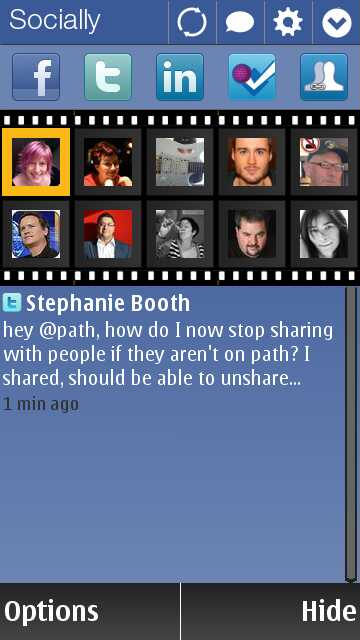 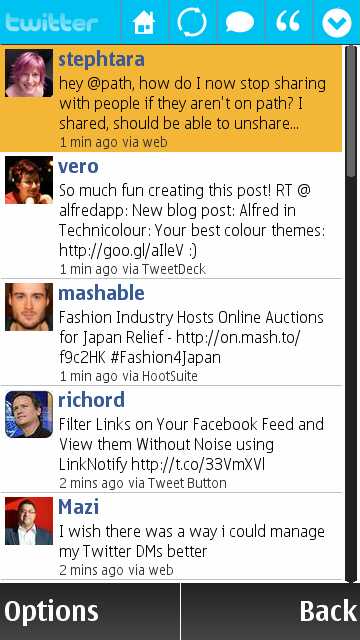 It’s worth pointing out that using Facebook via Socially (and the other social network applications) will give you all the recent posts, and not the “magic” filtering of top posts that you get on the main website, so Facebook suddenly becomes a different and more hectic place on your mobile.

Updating of your status looks pretty plain, with lots of white space and big dialog boxes. Once the half screen keyboard arrives in a PR update for the Symbian^3 devices, this is going to look and act slightly better – for now the T9/Full screen Qwerty keyboard will suffice, but it’s not elegant. Neither is that the fault of Socially, it has to work with the Symbian tools at its current disposal. 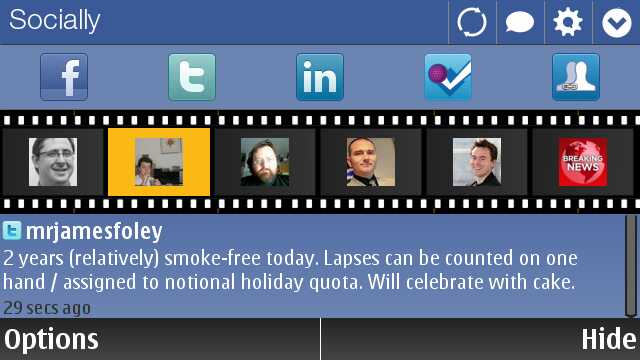 I love the home screen of Socially - it shows you the most recent updates from all your networks on one screen, with the last ten updates showing their avatar and cycling through their messages in the text window below. You don’t have to do anything, it just happens. That’s nice. It works in landscape, as does the whole application, although it feels that portrait was the main design principle, with landscape fitting in at a later stage. Given the short form of many status updates you actually get more information in portrait, which is the best argument for using it. 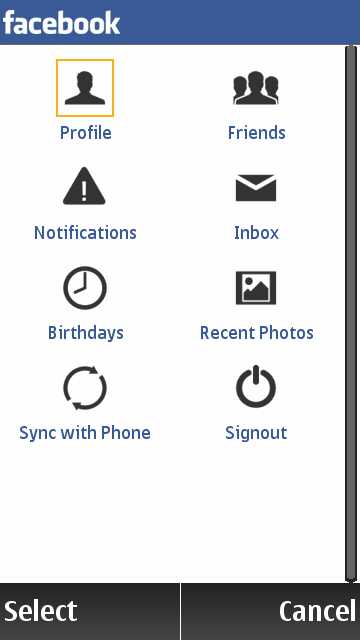 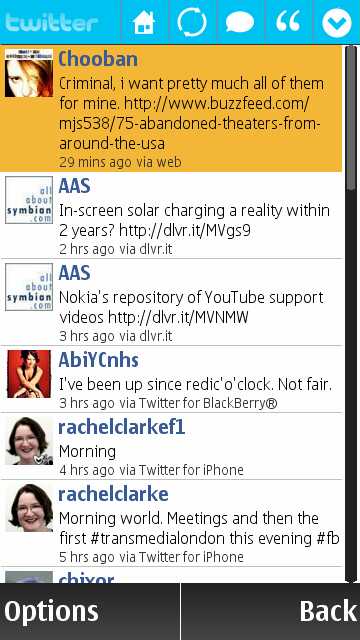 One of Socially's selling points is that it adds more "social" to your phone, and in a sense it does. When someone calls you, the Caller ID allows Socially to pull up their recent activity and displays it on the incoming caller screen. As it polls your social networks at regular intervals, these can be alerted to you on your stand-by screen, again as an overlaid pop up message. The programming options are there and I'd like to see Socially, if it wants to go down this enhancement route, to do some more work to fit in both with the standard Symbian UI in the application, and also with the hooks that Symbian OS provides to be part of the actual alert system used by the email, messaging and call log applications for example.

It's a touch frustrating that at some points, Socially is acting as an overlay, while at other times there is some deep integration going on - for example, allowing your Calendar to sync with a number of Facebook events such as birthdays, and to sync the profile photos on Facebook to the thumbnail images in your phone's address book. Socially seems to be an early stage application that mixes proof of concept ideas with final code. 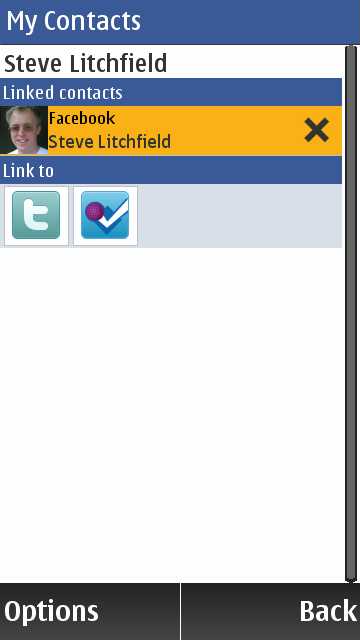 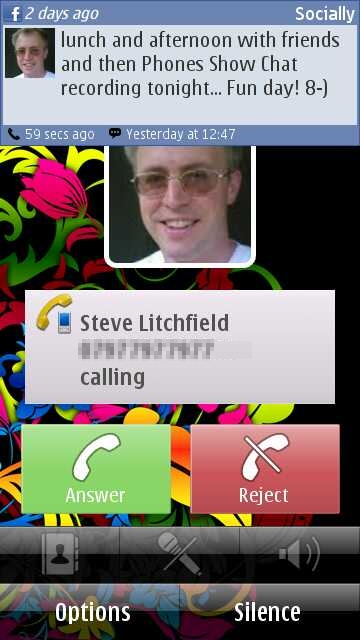 For all this to happen, you do need to keep Socially running in the background, so make sure to hit the hide button or switch away from it, rather than use the exit option in the menu. With all the data downloading going on (and with the huge number of Facebook contacts I have), Socially did lock up two or three times on me while reviewing the application, requiring a restart of the application. That's not something that you want in an application that has to stay running all the time to get the benefits of the social connectivty.

Putting that issue aside (which should be solved through user feedback and iteration on the part of the developers), Socially fits nicely in the scale of social applications on the smartphone. Given it doesn’t take long to outgrow Nokia’s Social Networking, Socially is a good next step and will probably have enough extra functions (and speed) to make it a useful application for many.