What could be more simple than touching the screen of your smartphone? That, in essence, is what most games make you do, and Fruit Ninja is no exception. But what it asks you to do with the touchscreen, and how it presents it, that's where the skill of a game design team comes in. Read on for my review. 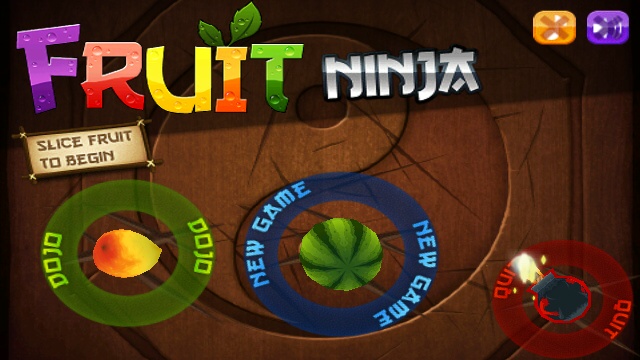 With a strong history in the mobile space, including a number of titles on iOS and the Sony Playstation Network, developers Halfbrick have a strong pedigree in casual games, and all of that is on show here.

In Fruit Ninja, you are given a simple ask - cut fruit that is thrown up from the bottom of the screen while a) avoiding the bombs that are mixed in (try to cut these and it's an instant game over) and b) trying not to let fruit fall to the floor without slicing it in half first. 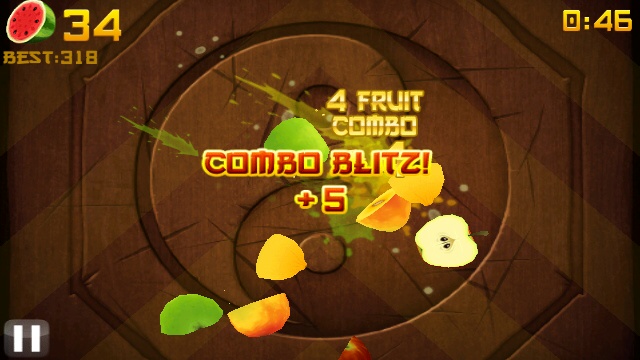 To help you, well, you don't get much. You have a blade, and you wield it (without ever seeing it) by sweeping your finger over the screen. Anything this passes over gets sliced. If it's fruit, then a point is coming your way. If it's more than one fruit, then bonus points will be added. Try and avoid the bombs that get thrown up as that's going to be painful.

Part of the appeal of Fruit Ninja is that it is such a simple idea, and whenever you die in a level, or come up short in your quest for a high score, you only have yourself to blame. Surely you can avoid the mistake next time with a bit more focus? 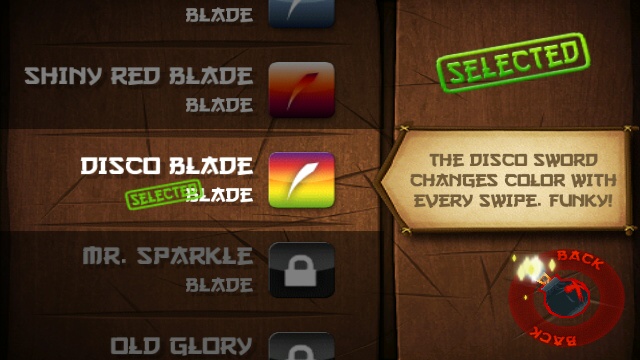 Just to make sure, Halfbrick have added in a bundle of game mechanics to keep your interest alive while you kick yourself. The basic game mode, Classic, is what I've described here, but you have two other modes as well. Arcade gives you a manic 60 seconds with weaker bombs (they just take points away from you) but adds in power ups, special bonus bananas and you can drop as many fruits as you like without the game ending. Or there's the Zen mode - no bombs, no death, just 90 seconds of action to get as many points as possible. 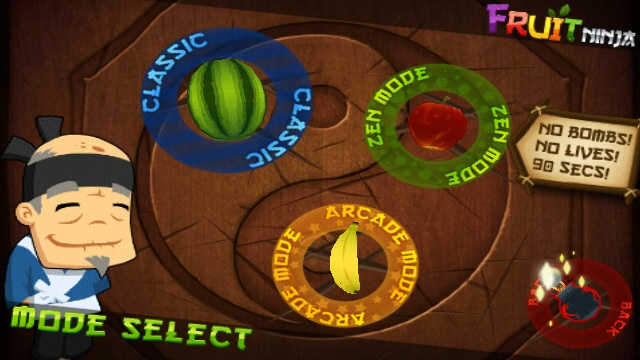 These are great additions and speak to two different extremes of a classic game, which is nominally the core, but you could easy have any of the three main modes as your core game, dipping in to the other two to keep everything fresh.

Sitting on top of the game modes is a rewards/achievement system. As you work through the game, specific goals, such as slice 100 bananas, will reward you with modifications to the blade sweep pattern, or change the background you fight against. To be honest, these are great, but not because they give you some nice tweaks to the game UI, but because they let you measure how well you are doing over a longer period than a single game (which of course relies on the high score). 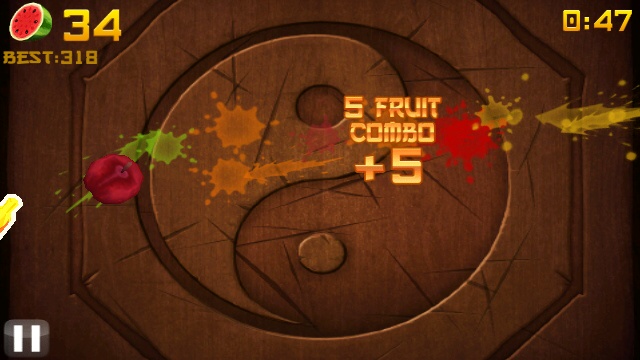 It's something that Nokia mastered with the N-Gage Arena, and that others have picked up since then. It works well here, and I can't help thinking "wasted opportunity" when games keep using these and they're not as tied together on Symbian as they are on others. 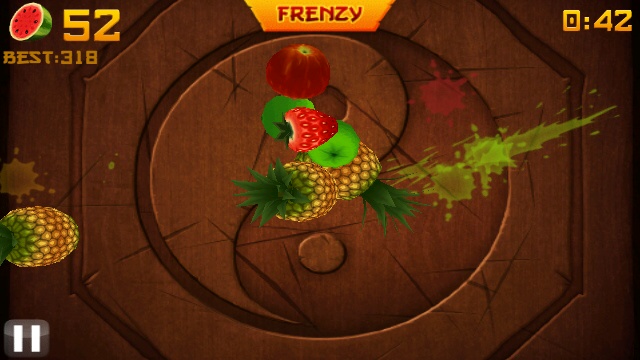 Yes, Fruit Ninja is available on other platforms. Should I bemoan that it's taken it this long to come to Symbian, or be happy that more quality gaming is coming to the platform and proves that it can do it just as well here as on iOS and Android? I think I'll go for the latter.

Because Fruit Ninja is a game that works everywhere. It's a nice and tight game on the small screen of the C6-01, and with room to breathe on the E7 there's the chance for fat fingers to be a bit more loose. Fundamentally it's the same simple and challenging game no matter where you play it.

Perhaps, looking back at Fruit Ninja, we should instead be asking "what could be more complicated than touching the screen of your smartphone?" Halfbrick's answer would be simple. Nothing, this is complicated enough.