Creating playlists can be something of a chore if you don't have the patience to put together the perfect mixes from your music collection. MoodAgent hopes to solve this problem by creating dynamic playlists based on your mood. Sounds too good to be true, so read on to see how well it works in practice and what else is on offer.

Whatever the platform, I have always found creating playlists something of a niche activity at best. Most of the time, whatever the platform. It has always just been something I've aspired to work on sometime, but never found the time. The nearest I would get to playing something other than albums is selecting a genre and setting the music player to shuffle mode! Perhaps I'm lazy and don't appreciate my music enough. Maybe, maybe not. Although for anyone like me, then smart playlists are a much needed way to enjoy one's music collection. Apple users have been enjoying their "Genius" system, which probably works by compiling usage data from all iTunes users.

MoodAgent, previously known as Playlist DJ, takes a slightly different approach. MoodAgent has a massive database of music in the cloud, in which every track is scored on five attributes: Sensual, Tender, Happy, Angry, Tempo. When you first run MoodAgent, it takes a while to catalogue all of the tracks on your phone, it then communicates this list up to the MoodAgent servers. In return, MoodAgent servers send back the mood scores for all of the music you have stored. 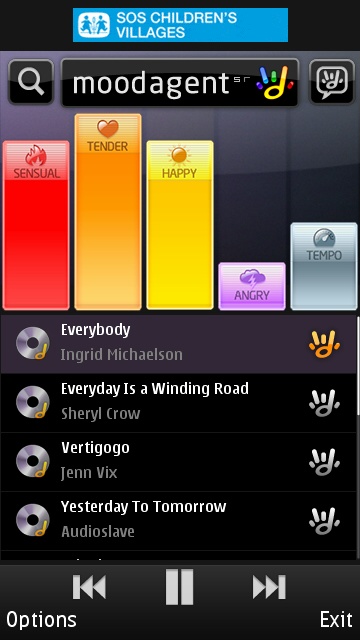 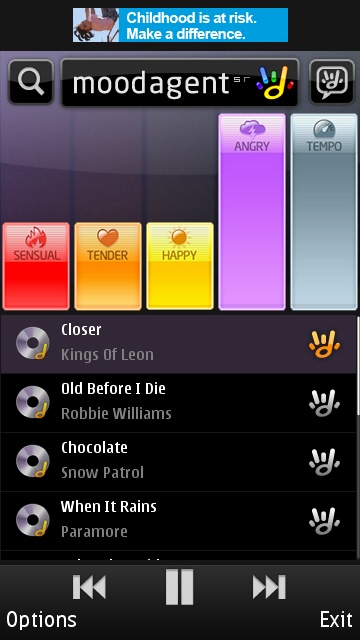 When I said a massive database, I wasn't exaggerating. When I first used MoodAgent, I had several albums which I assumed to be too obscure to be indexed. However, I was pleasantly surprised to see their tracks popping up in my MoodAgent playlists. Truly impressive. For any tracks that cannot be identified on your phone, Mood Agent also provides a desktop profiler for Windows and Mac.

When you load MoodAgent, you are presented with five coloured bars, one for each of the attributes mentioned above. You have to adjust the bars to match how you're feeling, or perhaps how you'd like to feel. As you do this, MoodAgent will present you with a playlist of tracks that match the distribution of attributes you've set. The playlist continuously rewrites itself as you adjust the bars. There seems to be some randomness in the selection process too. There is a menu option to refresh the playlist, which gives a different set of tracks, for the same configuration of bars. 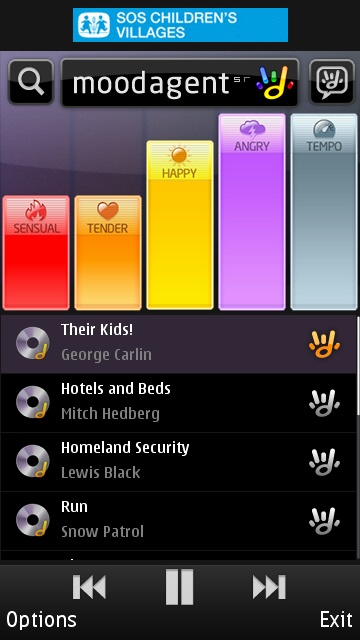 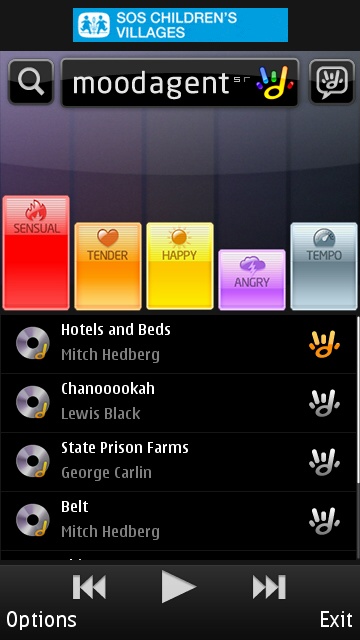 That continuous rewriting of the playlist is a good case of showboating to show how quick MoodAgent is to match tracks. However, I have found that if you adjust the bars too quickly, it can lead to some instability in the application. I'm sure this is a problem the MoodAgent developers will fix in time, although it might have been a safer approach to have an extra on-screen button to trigger compilation of the playlist once the user had settled on what they wanted their mood levels to be.

There are more configuration options for the playlists. You can set a limit on the number of tracks: 10, 25, or 50. Also, you can do away with generating a playlist based on your mood. Instead, you can select a track in the current playlist and use that as a "seed" to generate a new playlist. This is an interesting feature as it's the only way you can see a representation of how MoodAgent rates a particular track. More control over the playlists comes from removing a track from a the current playlist and excluding entire albums and artists from future inclusion in playlists. Fortunately, exclusions can be rescinded. You can also lock tracks into the playlist. 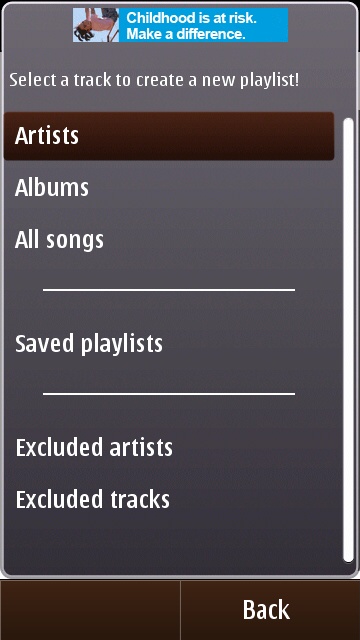 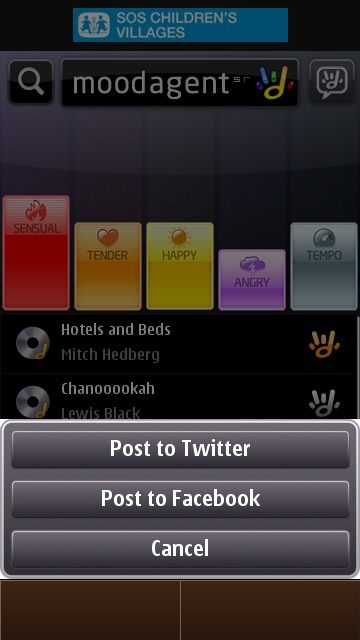 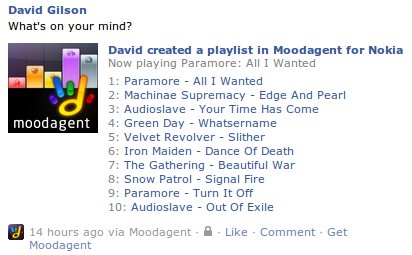 An example of posting a playlist to Facebook from MoodAgent.
We've covered how to use MoodAgent, but how does it actually perform? Well, this sort of thing is always going to have something of a subjective answer. MoodAgent has surprised me a few times with its choices, but I'd say I was surprised in a good way. I've been using MoodAgent (in both its Symbian and Android versions), and it has never thrown up a track that felt out of place.
I feel that the Symbian version of MoodAgent has a little work to do yet to have the amount of functionality I'd like to see. This is fair enough seeing as the app is currently hosted on Nokia Beta Labs, as well as the Ovi Store. For example, there are two features in the Android version of MoodAgent that I'd like to see in its Symbian cousin. First of all, in Android if you use the Last.fm application to 'scrobble' tracks, music played in MoodAgent will be scrobbled. In Symbian, we have Mobbler to scrobble our tracks. However, MoodAgent doesn't pipe track data to Mobbler. I don't know if there's a technical limitation to this, but scrobbling is a feature I'd like to see included somehow. Also, the Android version of MoodAgent has a home screen widget, this is something else I'd like to see on the Symbian version.
Those wish list items aside, I highly recommend MoodAgent. There is simply no reason not to install it if you carry music around on your phone.
MoodAgent is available in two forms on the Ovi Store. There is an ad-supported free version and an ad-free paid for version. At the time of writing, the paid for version is available with "80% off" for £1.00. This is connected with a competition running, whereby tweeting your playlists to Facebook could win you an N8. You can also try the latest bleeding edge version from Nokia Beta Labs.

David Gilson for All About Symbian, 25th January 2011.