Tetris and electronic gaming go hand in hand, of course. Over the years there have been hundreds of versions on a dozen platforms, not least my own Atomic on Psion and the Nokia Communicator (ah, the memories...) There have been quite a few versions for S60 and then N-Gage too, but we now have something of a next-generation winner in Tetris HD, an official - though commercial - adaptation from Electronic Arts. With traditional and 'souped up' modes, it's a class act from start to finish.

One of the biggest challenges for purveyors of 'classic' games in 2010 is keeping the old game fans happy while also attracting youngsters with a shorter attention span - EA has solved this in Tetris HD, built for the latest graphics-accelerated Symbian^3 phones, by effectively offering two games in one.

There's the classic Tetris, named 'Marathon', in which tetrominos fall from the sky without limit, getting gradually faster and faster, while you try and line them up and eliminate rows. And then there's 'Magic', in which you have goals to attain (e.g. 10 rows) in order to clear each 'level', while special powers are offered intermittently, such as a 'Minimizer' to reduce any given tetromino to a single square, for fitting in as needed into the grid, or 'Bubble Wrap', in which all the blocks in the grid are turned to bubbles for a few seconds and you can pop as many as you can tap on, as quickly as possible. 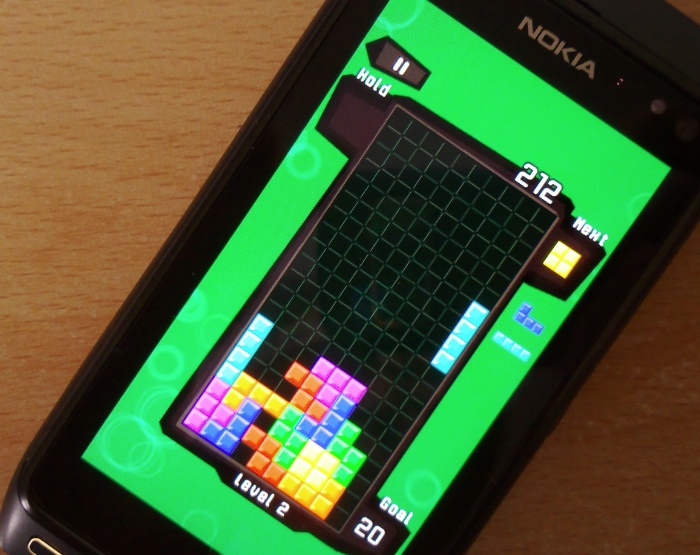 Both game modes work very well. The Marathon/classic mode lets you start at a particular level/starting speed, which is good as experienced players won't want to start on the very earliest beginner speed. And it's good to see that the range of starting speeds offered goes right up through tricky to difficult to impossibly quick - there's a challenge here even for the very best Tetris player.

Plus the blocks speed up as you progress - note that some weaker Tetris clones forget to do this and become boring as a result. As with my own Atomic, the game just accelerates here to provide more and more of a challenge. As you score higher and higher, the animated backgrounds change colour and pattern, plus the digital soundtrack cycles between various alternatives. One nice touch is that the soundtrack's volume can be adjusted using the phone's volume keys - again, not all games allow this.

Control of the tetrominos on a touchscreen is via a very intuitive system of tapping a screen edge to rotate, dragging left or right as needed and then swiping downwards if you want to quickly drop a tetromino in a particular column. Again, this is very well done - a classic gotcha in early levels of many Tetris games is that gameplay is just too slow and ponderous. Being able to intuitively position blocks and then swipe them downwards almost in a single gesture means that any boring or obvious moves are dispensed with nice and quickly.

The options include a 'Ghost piece', showing where the current tetromino will land - good for beginners, but I prefer the visual challenge of working out where pieces will fit - that's part of the mental battle with the game, so I turned this off. A 'tutorial' is more of a set of hints than a full lesson, but still good to have. 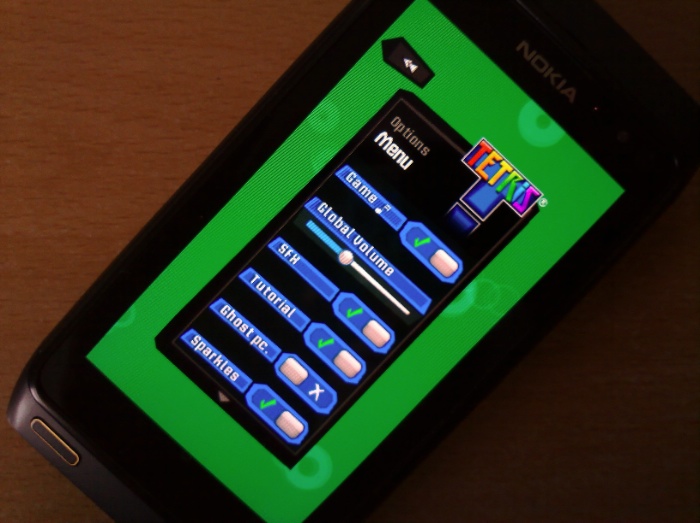 The 'Magic' mode is interesting and adds five distinct powerups/weapons/spells (whatever you want to call them) to the mix. And, importantly, you never know when they'll appear for use, keeping the tension up within each level. 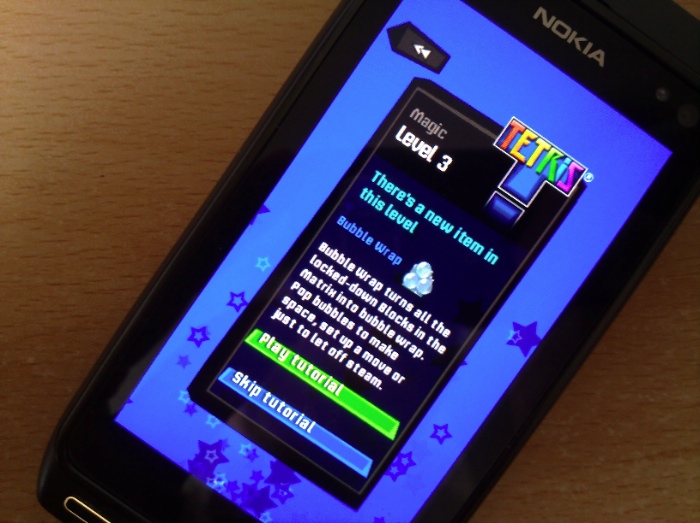 There's very little wrong with Tetris HD. If I was being picky, I'd point to the tap sensitivity of the menus, in which I often had to tap twice or long-tap in order to register an option. And I'd point to the way the gameplay area is significantly less than the full nHD screen resolution - EA do a great job of distracting you with weapon toolbars and score panes and animated backgrounds, but at the end of the day the playing area could be larger and even easier on the eye - this will be more of a problem on the 3.2" screened C6-01.

Both factors lose the game a few score points here, but don't let them put you off - Tetris HD is a terrific version of a classic game, implemented superbly and, most importantly, provided me with hours of fun while testing and reviewing. But don't tell Rafe - this was supposed to be, you know... work!

Steve Litchfield, 2nd December 2010, for All About Symbian and Ovi Gaming