Galaxy on Fire is such a rubbish name for a great game. I’d go so far as to say that even Roger Corman would reject it (and he ended up with “Battle Beyond the Stars” once). Get past the hokey name, and you have a wonderful mobile version of the sprawling space trading games that used to be religiously popular when having Mode 7 on your computer was cutting edge. 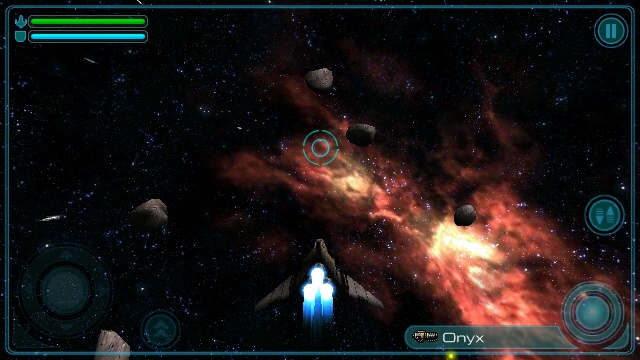 You take on the role of Keith T. Maxwell (no relation to the son of the ex Daily Mirror Editor, I presume), at some point in the future. Earth has expended, become the Terran Empire, and the galaxy has opened up with inter-stellar flights between planets, space stations and waypoints. Into this mix, the Terrans are at war with another race, and you, as the solitary pilot who doesn’t want to be in the military anymore, have been roped into a mission or two, just because, you know, well… 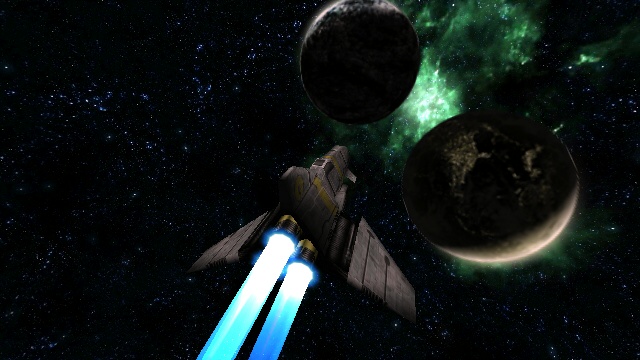 Plot aside (let’s be honest, this bit is little better than some of the stuff Corman has come up with), Galaxy on Fire drops you into a huge gaming area, with lots to see and do. Especially if you like shooting at things. It also takes some time to open up the full game for you. As you start, you get handed one basic scout ship with a little gun, and effectively ordered to do one mission. 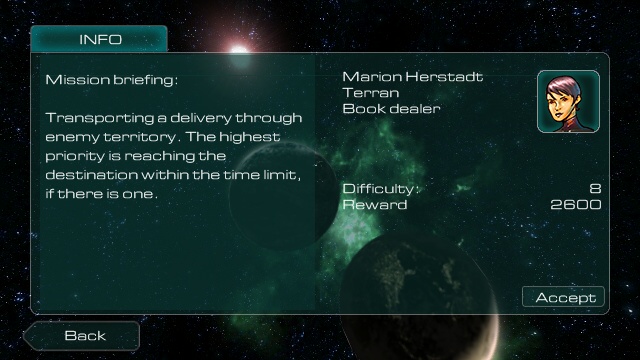 As you progress along the initial storyline, getting handed each mission as you go, like a child learning about compound interest before breakfast, the craft can be equipped with more hardware, including a Star Trek-like shield, different weapon styles and even a brand new spaceship with higher specs.

And as the single missions finish (on a poignant note of revenge, one has to say, entirely in keeping with the b-movie nods in this review), the galaxy is suddenly opened up to you in an open ended bounty hunter’s delight. You can fly around the galaxy, going wherever you want (as long as you can pay the travel fees for what I guess is a big commercial company operating the hyperspace bypasses). 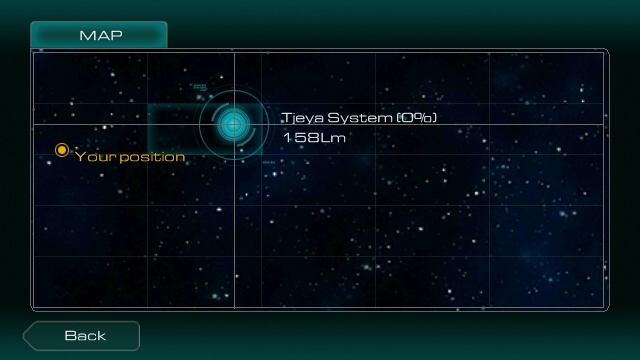 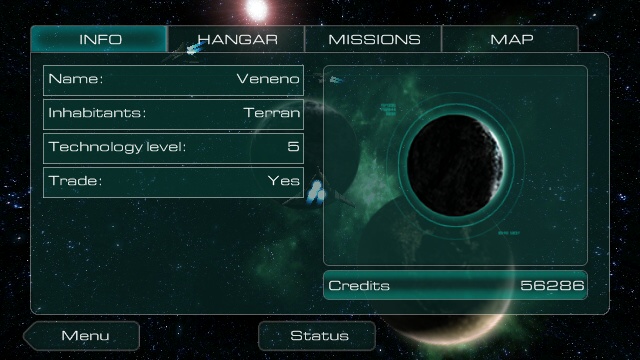 When you arrive at your destination, you’ll find lots of missions to choose from – mind you if they’re labelled as escort, delivery, minefield or anything else, chances are it’s 'go to a waypoint and shoot things' – different weapons and missiles for your ship, and different ships to buy (including some rather nice ones from the alien races). In other words, a bounty hunter’s paradise.

Let’s make one thing clear here – Galaxy on Fire is missing one of the vital elements that makes Elite (and other large scale space adventure games) so addictive, and that is the trading element. While you can sell items that you collect (err… awarded at the end of each mission), or keep them in your cargo bay and fly to another destination that might offer you a higher price, there is no way to buy goods cheaply and fly around to sell them at a high price. 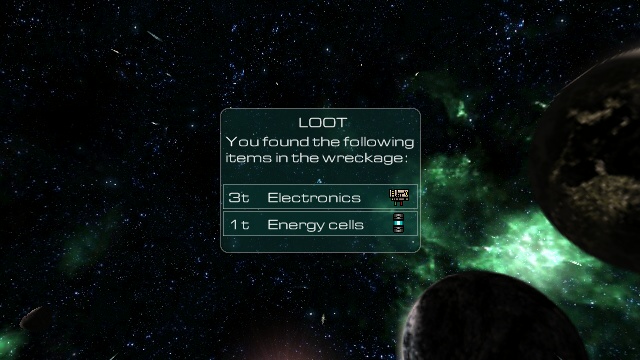 Unlike Elite, where you could trade to infamy, your only choice in Galaxy on Fire is combat. Luckily, combat can be fun!

While you have the option to use a virtual joystick on the screen, it’s far easier (and more accurate) to use the tilt sensors (accelerometers) option. Rotate your landscape-orientated phone forward and back for the pitch control, and left and right to turn your craft. Simple. Firing is just as easy, one tap on the fire button switches the auto-fire on, and it’ll stay spewing out energised death metal until you mash the button down again. Similar illuminated buttons activate your boost for a burst of high speed, toggle weapons, and fire missiles.

If you’ve been worried about the accuracy or the underlying sensitivity of the tilt sensors in the N8 for gaming, then Galaxy on Fire is your salve, because the tiny movements you can make in flight to your course and aiming are pixel perfect with a tiny movement. It also shows how fluid a game engine there is here – when you do a head to head gun pass and whip your craft round to try and get on the tail of the enemy, you start to develop a lovely sixth sense of where they should be without having to look at the radar, banking out at the right time, watching the engine trail for a clue to the direction and lo and behold, there he is, right in front of you… fox four, fox four, boom. 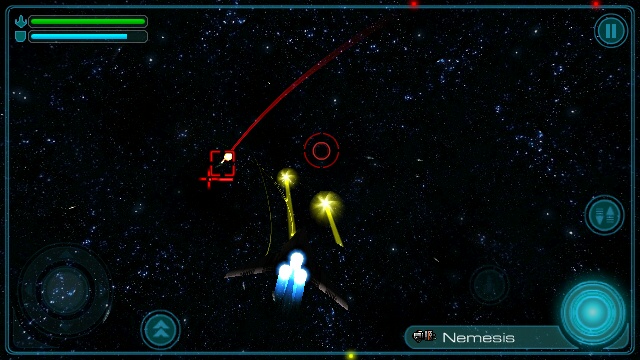 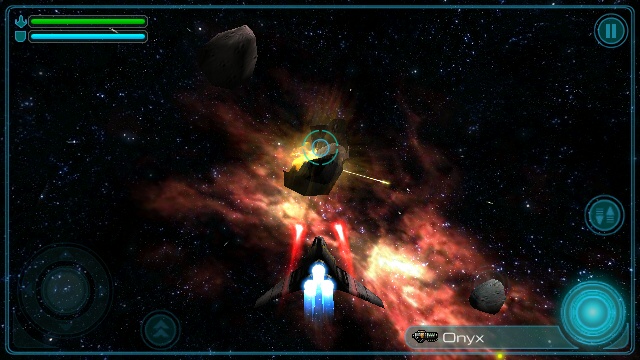 This is essentially zero-g air combat – here’s no need to worry about orbital dynamics and closing speeds, this is more Star Wars than 2001: A Space Odyssey. In other words, fun comes first and there’s a lot of fun to be had. 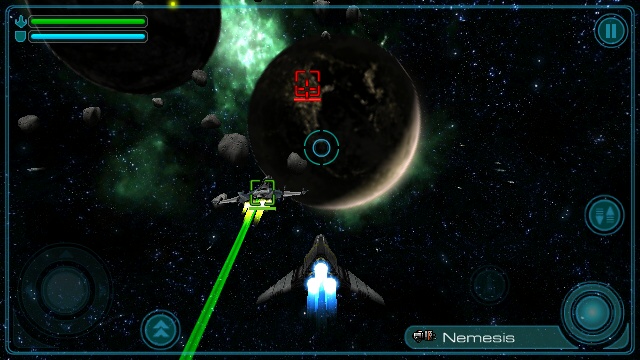 Galaxy on Fire’s open gameplay takes time to get to, and that’s a worry for me. Up until that point the developers are relying on a threadbare story to pull you through. Once you get to control your own destiny, Galaxy on Fire becomes a great little game. It has the right level of difficulty, a good learning curve and rewards offered over time, and the missions, while basic, are short enough to be good “on the go” gaming snacks.

Until 'Galaxy on Fire 2 Strikes Back', I see no need to visit any other spaceport this side of Golgafrincham.

The question now is if my rank will ever be “deadly” again.