11 million content items are being downloaded from Nokia Store every day, according to figures recently released by Nokia. This annualises to a rate of 4 billion downloads a year, or 1 billion a quarter. The top five countries for downloads from Nokia Store are India, China, Russia, Brazil and Turkey. The top device is the N8, followed by the 5800, 5233, 5230 and C3.

The country charts really bring home the fact that Symbian's strongholds across the world no longer include Western Europe. Downloads are largely a function of the installed, active user base, some 300 million users worldwide at the end of 2011, and although plenty of Store-compatible Symbian smartphones were sold in Western Europe in 2009 and 2010, a fair number of these will now have been replaced by other handsets by the typical Western tech-savvy users.

India, China, Russia, Brazil and Turkey are all very populous countries and all with mean incomes well below Western European levels, making Nokia's Symbian smartphones a good budget alternative to the likes of the iPhone and top-end Android smartphones. With the high population figures, the download breakdown is perhaps not surprising at all.

We're also not surprised by the device breakdown. The N8 is the standout Symbian smartphone of the last 3 years (since the N95 8GB, arguably) and is popular everywhere because of the 12mp/Xenon-equipped camera. The 5800 was the first S60 5th Edition smartphone and flawed at launch, but has received around a dozen firmware updates amd has been kept very up to date by Nokia - with the mid-tier price, it has proved incredibly popular everywhere. The 5233 and 5230 are typical of the 'budget' category mentioned above.

The top 5 apps in 2011 were Facebook Chat, eBuddy Messenger free, WhatsApp Messenger, High Speed 3D Free and Skype. These titles reflect the poor built-in Instant Messaging experience in Symbian^3, leading users to search for alternatives. The racing game's presence is, I suspect, less to do with it being that good and more that it was heavily 'featured' by Nokia in the app store client for a large proportion of 2011.

These figures include downloads for both Symbian and Series 40 devices. Approximately a third of downloads come from Series 40 devices, a proportion which increased following Nokia's decision to remove the requirement to register in order to download free items (visible as the jump in daily download figures between July and September 2011). The remaining two thirds are from Symbian devices. 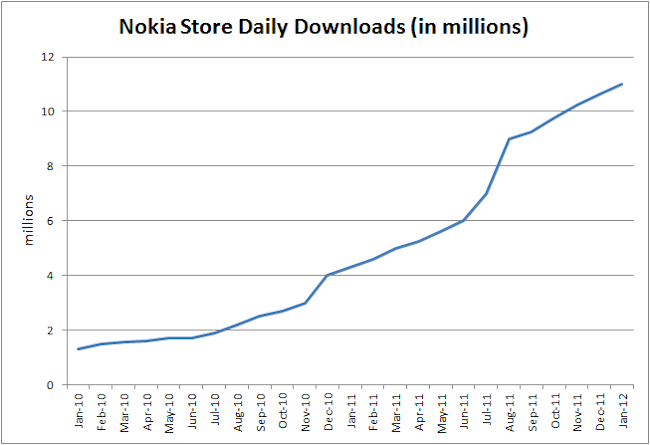 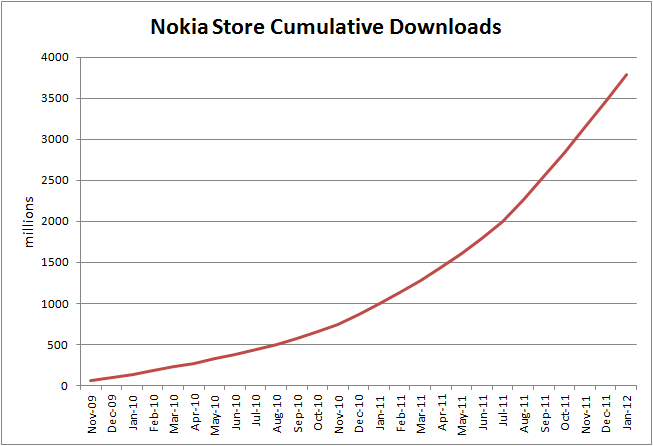 Thanks to My Nokia Blog for alerting us to the newly updated Nokia Store statistics.