Symbian OS still on top, according to StatCounter

Thanks to a reminder from WebProNews, it's instructive to look again at the smartphone world via StatCounter, a pro service embedded on many web sites which tracks the browser and OS used to access them. And, reflecting the still enormous installed base of Symbian-powered smartphones across the world, Symbian still (for web access, at least) still dominates the world, at 31%. The full graph is below, along with some comments. 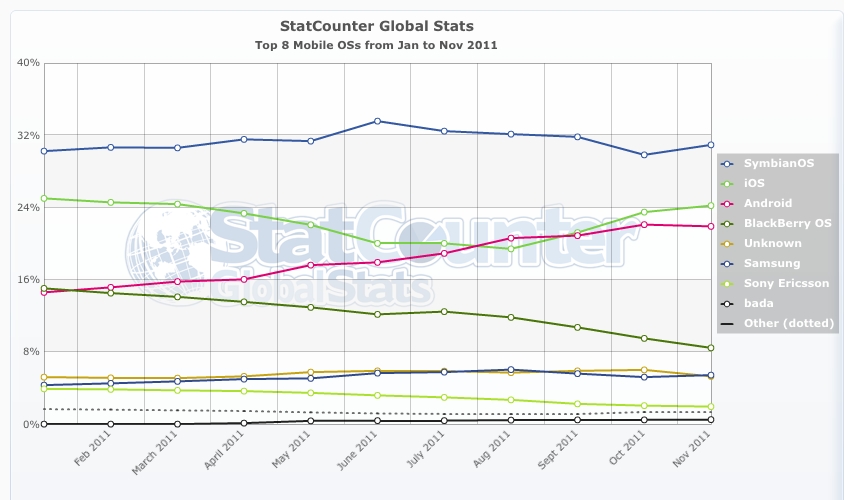 The counter-intuitive nature of the chart, i.e. that Symbian still dominates despite Android and iOS activations reportedly running very high through 2011, is explained by the difference between sales marketshare and installed base 'share'. Earlier this year, actual sales of Android-powered smartphones per quarter overtook Symbian. But the 300 million or so active Symbian users across the world - regardless of whether they're using a three year old Nokia 5800 or even an older N95 - is a statistic that can't be ignored for actual use. You may remember that I've talked before about not underestimating the inertia behind Symbian's installed base - the numbers boggle the mind.

Added to the huge installed base of Symbian smartphones is the factor of the rise and rise of affordable data, even on pay as you go SIM cards, across the world. In other words, just about everyone is now getting online. In StatCounter's eyes, web access is web access.