Andrew Orlowski's posts on Psion, Nokia and Symbian over at The Register are often a rollicking read, especially for geeks interested in Symbian's past. This five page article is all about Hildon, the UI (and indeed 'platform', or so argues the piece) that was evolved to Series 90, used in the Nokia 7710, and which underpinned a revamped Series 80, used in the Nokia 9500 and 9300. One for Symbian historians, definitely! 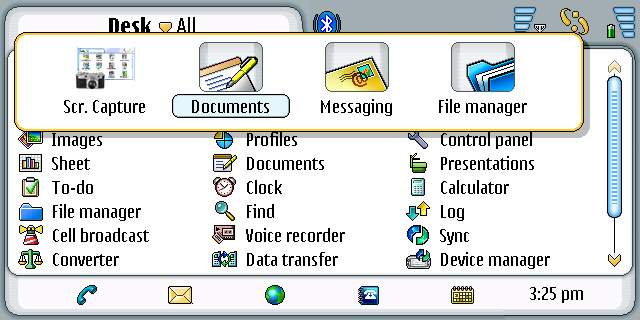 Three months later, at the industry’s annual get-together in Cannes, Nokia revealed its first new Communicator for three years, the Nokia 9500, based on what looked like Series 80. What nobody knew - and outside of a small circle of insiders, most people still don't know - is that the 9500 was based on the entirely-new Hildon platform; it was the second Hildon device.

Nokia were able to do this thanks to the remarkable flexibility of Hildon, and specifically two assets that the team had created. Neither of these were on the original specification, but the designers included them because they could do so without delaying the project, and knew they added long-term value of the work.

One was user interface skinning, the ability to change the look and feel of the user interface chrome: the widgets, and colour schemes, very quickly and on the fly. A skinnable UI could be changed by the user in real time. So Hildon could be made to look like a traditional phone, a Series 40 or Series 60 phone, or it could look like a Nokia Communicator.

The team also added to Hildon backward compatibility with Crystal, the basis for the 9200 Communicator. Hildon could run Series 80 applications written for the older platform without any overhead. Not all applications ran on Hildon, and not always perfectly, but many did so well and without an expensive run-time translation overhead.

As a consequence, to this day, nobody really knows that the Nokia 9500 and Nokia 9300 are Hildon machines – a testament to the subtle, thoughtful and forward-looking design decisions taken in London three years earlier. It allowed Nokia to present the 9500 as an upgraded Series 80 machine, with minimum disruption to the existing Communicator developers, and to enterprise users familiar with the earlier UI.