The N8 takes on the MyTouch 4G Slide, the Xperia Arc, the Galaxy S II and the Canon S95

When it comes to comparing smartphone cameras, I've got a bit of a reputation. But so has my counterpart in the States, Myriam Joire, and she's just put up her review of the latest and greatest Android phone being marketed over in the USA with the (manufacturer's) tagline "the most advanced camera of any smartphone". I mention all this because, Myriam being Myriam, she naturally did a detailed set of head to heads with other leading smartphone cameras, plus a standalone specialist device. Including our beloved Nokia N8. And she's one tech reviewer whow knows about subtleties like... keeping the phone steady as the shutter comes down! Links, examples and comments below.

Here's the full review, in which she not only posts example photos from the review device, the HTC MyTouch 4G Slide (now there's a mouthful) but also a ZIP file containing the original photo files along with (some) matching samples taken with the N8, Samsung Galaxy S II, Sony Ericsson Xperia Arc, plus Canon's s95 standalone camera.

And, me being me, I couldn't resist grabbing the ZIP file and looking at all the raw images, to draw my own verdict!

In summary, in relation to the MyTouch 4G Slide's camera, Myriam concluded:

"There's no doubt that the myTouch 4G Slide takes beautiful pictures. Still, as we mentioned above, the Galaxy S II usually performs better and the N8 still plays in a league of its own. The Slide manages to gather a lot of information, but that's no match for the massive amounts of detail captured through the N8's impeccable Zeiss optics."

Taken from her extensive example photo sets, I wanted to pluck out the hardest shots, the ones which would really test the phone cameras - after all, these are supposedly the best cameraphones in the world. Discarding the (slightly) inferior Xperia Arc and the Canon for the purposes of this little link-of-interest/featurette, and discarding all the 'easy' (daytime) shots, I plucked out:

Shot 1: Dusk over the sea 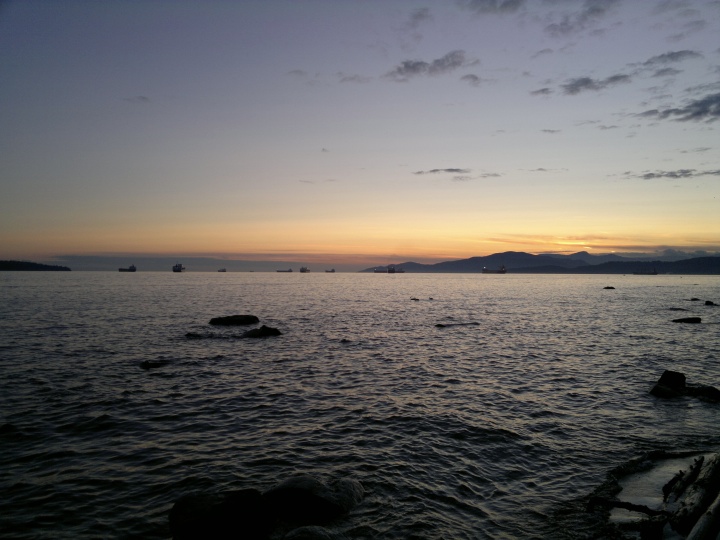 Challenging conditions as the light was very low and yet extreme detail is required. Again, these are perhaps the three best camera units in any phone right now (MyTouch, SGS II and N8), so I pushed the pixel detail to the limit. Here are zoomed in crops of those tiny ships on the horizon, looking at the extreme detail these sensors can resolve in challenging light conditions. MyTouch 4G Slide first, then Galaxy S II, the Nokia N8: 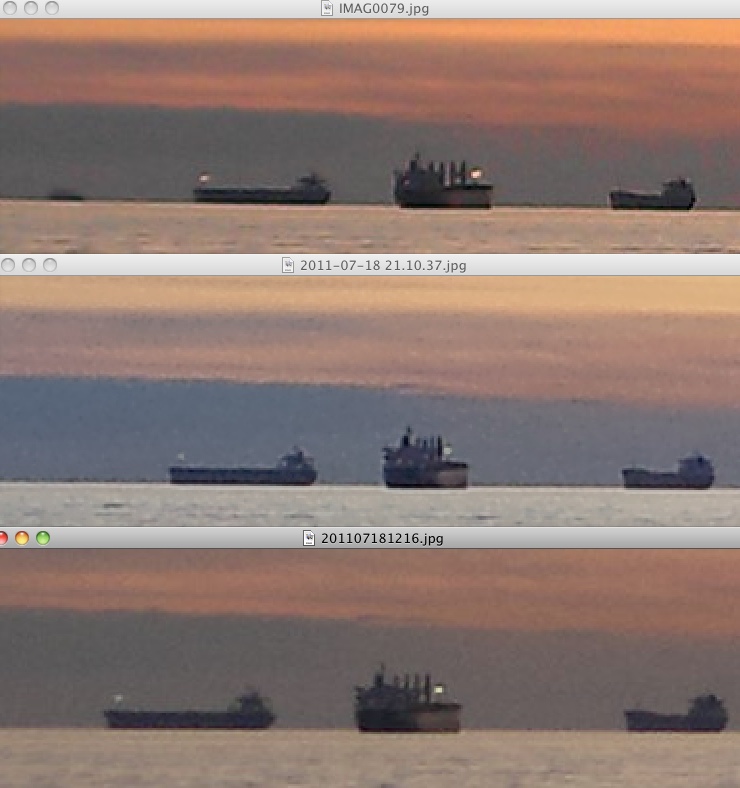 The first two shots clearly have a degree of artificial sharpening to them, unpleasant in the MyTouch 4G Slide's case. Although slightly 'noisier', the N8's image is more natural and has more actual detail. As you would expect, given the N8's Carl Zeiss optics and 12 megapixel sensor.

Disregarding the flash of each phone camera, the idea here was to look at colouration, detail and extreme low light noise performance. Here's the full shot: 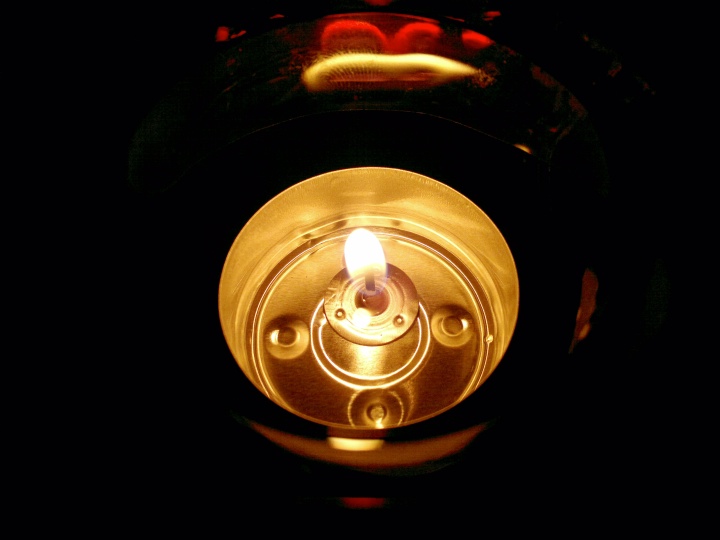 Again, cropping in to a relevant degree on the shots for the MyTouch 4G Slide, the Galaxy S II and the N8, we have: 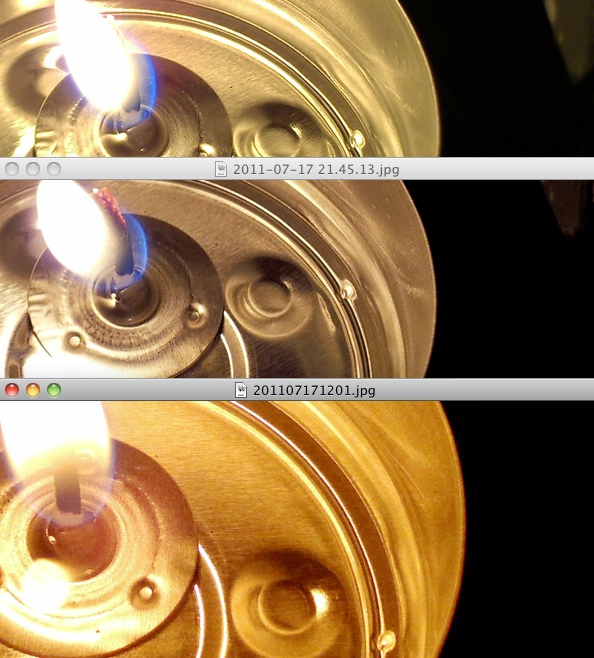 Backing up Myriam's ranking for these three phones again, although all three photos have impressive detail and lack of noise, the MyTouch 4G Slide's photo is (by a small margin) worst here, with so much artificial edge enhancement that the shot almost looks flash-lit. The Galaxy S II's version has fabulous detail, the best here, with just a touch of edge enhancement, but the colouring is too artificial. The N8 wins here, in my opinion, because the light is just right, i.e. capturing the warmth of the candle. There's less apparent detail because the N8 doesn't artificially enhance the raw image at all, i.e. it's left 'natural'.

Again, pushing the sensors in these top camera phones to their absolute limit, taking a scene with lots of detail but very little ambient light. 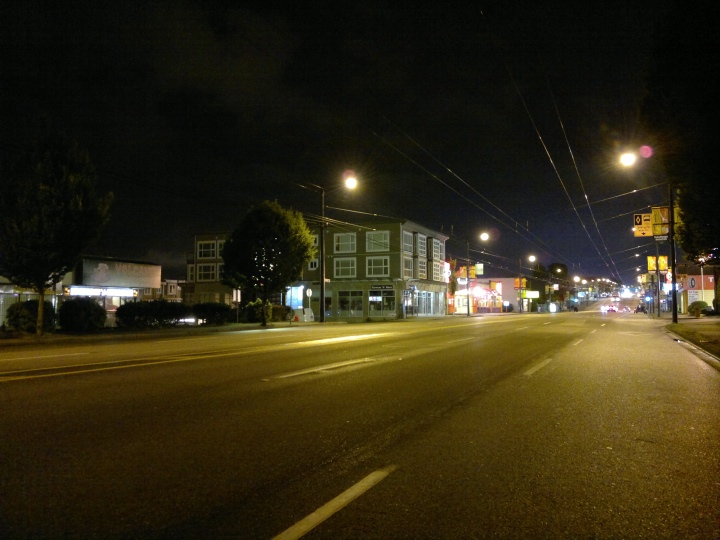 Zooming in to see a detail with text, always a great visual test when comparing shots, in the same order - MyTouch 4G Slide, SGS II and N8: 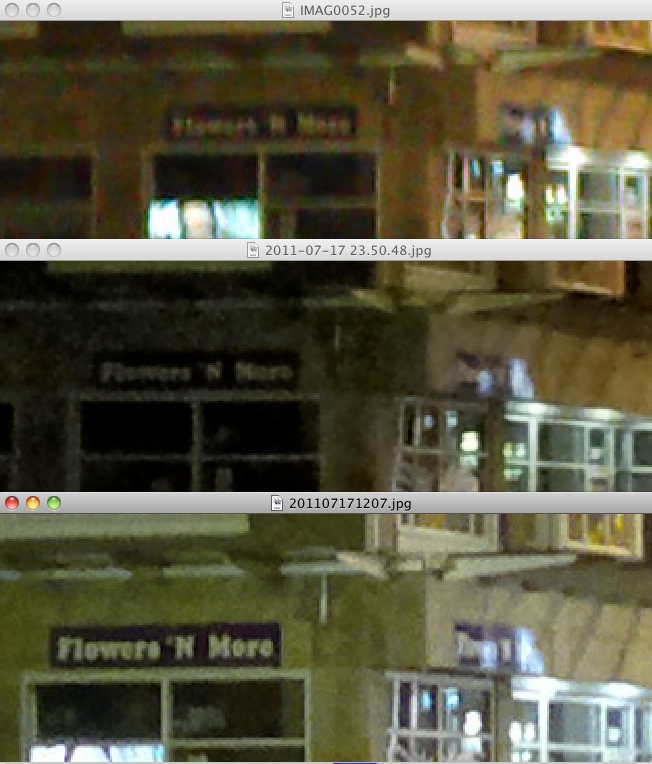 Again, the ordering of these three top camera phones is very evident. The top crop is noisy and indistinct, the SGS II's is noisy but just about legible, while the text is easily readable on the N8's version, in part because of the slightly higher raw resolution, but also due to the very large sensor used - when the going gets tough, light wise, the N8 remains top dog, in Myriam's words, "by a wide margin".

(And this is all without counting in the N8's Xenon flash, which will produce vastly better 'people' shots indoors and in social situations.)

You'll have your own ideas of which shots merit comparison, perhaps. It's a shame that Myriam didn't take every shot with every cameraphone. but I do know how much work this involves and her ZIP file is still worth grabbing if you're an armchair camera geek like me, to perhaps look at wider groups and comparisons between all five devices.

Comments welcome if you have time to digest and compare!

Steve Litchfield, All About Symbian, 3 Aug 2011

Filed: Home > News > The N8 takes on the MyTouch 4G Slide, the Xperia Arc, the Galaxy S II and the Canon S95