The financial results beat market expectations - an average of estimates from 29 analysts had device margins at 8.5% versus the announced 9.8% with similar figures for net income and total sales. Consequently Nokia's share price is slightly up this morning (3% at the time of writing). Nokia lowered its forecasts for Q2 and Q3 2011, suggesting that it faces a tough year ahead, but also announced that it has signed a definitive agreement with Microsoft.

“In the first quarter, we shifted from defining our strategy to executing our strategy. On this front, I am pleased to report that we signed our definitive agreement with Microsoft and already our product design and engineering work is well under way.

Following a solid first quarter, we expect a more challenging second quarter. However, we are encouraged by our roadmap of mobile phones and Symbian smartphones, which we will ship through the balance of the year. We are fully focused on delivering the needed accountability, speed and results to positively drive our future financial performance.”

In terms of smartphones, both sales and market share were down, largely in line with expectations, given the competitive market conditions. The smartphone sales show the first major sequential fall since 2008 (although part of this is attributable to the very strong seasonal sales in Q4, 2010), reflecting the challenges that Nokia faces with the competitiveness of Symbian, especially at the higher end of the market.

The smartphone sales figures are unlikely to have been significantly impacted by Nokia's strategy change, which came half way through the quarter. Nokia remains the single biggest smartphone manufacturer by some distance, but will have to work hard to maintain that position through the transition to Windows Phone.

Looking forward, Nokia now expects a tough 2011; in Q2 it is expecting its Devices and Services margin to be between 6% and 9% and devices and services net sales of between 6.1 and 6.6 billion Euros. A similar forecast is expected for Q3 2011. This forecast is lower than previous expectations. 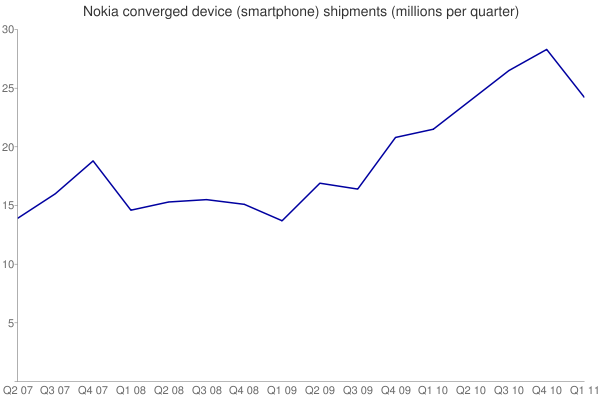 This chart illustrates the market context in terms of sales of smartphones over the last three years: 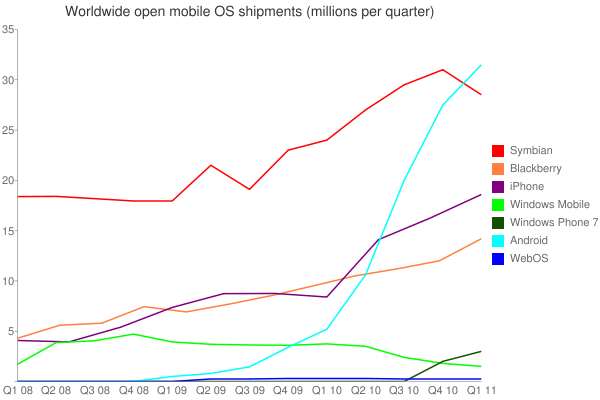 Notes from the earning conference call