The Qt SDK beta 1.1 was launched today. While the SDK is a beta release, the Qt (4.7.2) and Qt Creator (2.1) releases within it are final (i.e. not beta or previews). This means that Qt Quick can now be considered to have been officially released. Qt Quick  is a crucial step forward for Qt, bringing easy UI creation, which allows developers and designers to work together more easily to create applications with great user experience.

We've been writing about Qt Quick and its benefits for some time now, but the formal official release does mark a very important milestone. We're already seeing the first applications take advantage of the new technology and many more are on the way. The official release is one of the final steps needed before Ovi Store can start accepting submissions of application based on the technology.

One further significant step to come is the building and release of Qt Quick components for Symbian and MeeGo. This will give developers a selection of pre-built UI widgets, with the appropriate Symbian or MeeGo look and feel, which will help speed up application development further.

The Qt SDK beta 1.1 follows on from the earlier release of the technology preview. The Qt 1.1 SDK is a merge of the Nokia Qt SDK 1.0 and the previous Qt SDK. It offers a complete development environment for writing Qt application, with a special emphasis on building and deploying Symbian and MeeGo applications.

The beta version contains updated versions of Qt, Qt Creator and the Qt Mobility API (details below). As a whole there are numerous big fixes and improved QML performance, most notably on the Symbian platform.

The Qt SDK can be downloaded from Qt or from Forum Nokia. Existing users of the technology preview will receive an automatic notification to upgrade to the beta release.

One important thing to note is that applications developed using the beta SDK (or rather Qt 4.7.2) can not yet be submitted to Nokia's Ovi Store. This restriction is expected to be lifted shortly, most likely to coincide with the final release of the Qt SDK 1.1. 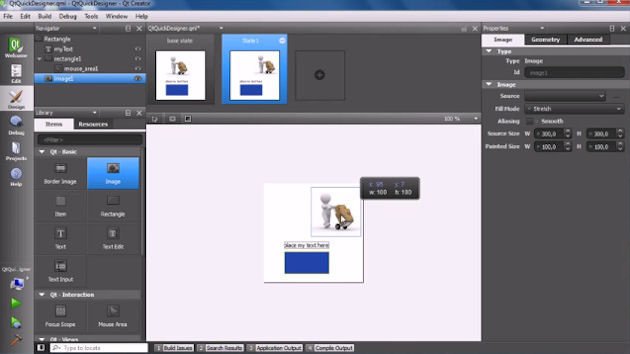 Qt 4.7.2 is a maintenance release, which delivers a number of bug fixes to November's Qt 4.7.1 release. More importantly this version marks the official release of Qt Quick (see above). More details are available in this Qt Labs blog post.

Qt Creator 2.1.0 has had a number of important fixes since its release candidate, including changes to mobile application project wizards and deployment related files. The crucial element of Qt Creator 2.1.0 is full support for QML (e.g. Qt Quick Designer - a WYSIWG editor for QML UIs) and mobile application development. More details are available in this Qt Labs bog post.

Qt Mobility 1.1.1 is also a maintenance release. It includes numerous bug fixes and improved QML bindings and performance, especially for the Symbian platform. More details are available in this Qt Labs blog post.