Since the dawn of time (1993), Symbian devices/smartphones have had various three or four-fingered salutes to kill things and, importantly, to bring them back from the dead should the unimaginable happen. The keys required to 'hard reset' a S60 phone have varied over the years because of differences in form factors and button availability, but it seems one of Forum Nokia's writers has discovered the magic combination for the Nokia N8 and other Symbian^3 phones, see below.

NB Update: It seems that a three-fingered hard reset will lose you the Ovi Store and (maybe) Ovi Maps, in that Nokia doesn't have a standalone installer for these yet that's compatible - and the apps aren't strictly in the firmware. Your mileage may vary, but be warned. This procedure is for emergencies!

Note that the usual *#7370# 'hard' reset should work fine. The reset documented below is at a lower 'emergency' level. 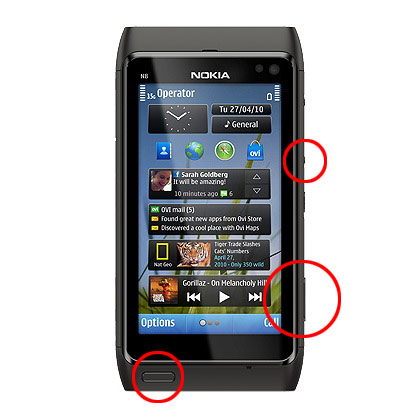 You may be wondering about magic sequences for other Symbian phones.

Google "three finger" and the device of your choice for other combinations!

Again, these are for HARD resetting. You'll lose everything on the internal disk and perhaps even some factory-pre-installed apps. Worth remembering the sequence should things go horribly wrong and if you're miles from a Nokia Care Point though?