As part of its Nokia World announcements, Nokia today introduced the Nokia C7-00, a mid-range device, running Symbian^3, in a touch slab form factor. Features include a 8 megapixel EDoF camera with the ability to record HD (720p) video, a 3.5 inch AMOLED screen, 8GB of internal memory, microSD card slot, integrated GPS and comprehensive connectivity options. The C7 will be available in Q4 at a price of €335 before taxes and subsidies.

The C7 does not quite match the specification list of the Nokia N8, but it comes close. Compared to the higher end device, it misses out on the HMDI port, has less internal memory and a lower specification camera. However, crucially, it costs significantly less. If you're looking for maximum value, while maintaining a top-end specification, the C7 is going to be a very attractive device. 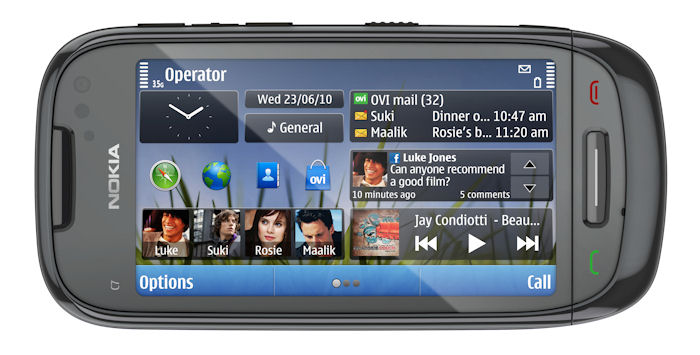 If the Nokia World-launched phones were a pop group, this would be "stylish phone". The Nokia C7 is a tactile wonder, with lots of glinting metal, silver and black highlights. Assuming that this stays competitively priced when it gets onto the networks, it should be the phone you reach for when you don't want the masculine efforts of previous S60 5th Edition and beefier Symbian^3 devices.

Hopefully someone in the PR department is looking back at the Razr and Sidekick campaigns - because if the C7 can get picked up and used by some of the more recognisable celebs around town (I'm thinking Katy Perry or Lady Gaga), then that's only going to cement its reputation as a phone that begs to be left on the table to be looked at before it's actually used.

While Nokia have invoked a design language over the N8 and E7, the C7 goes in a slightly different direction, and it's all the better for it. Yes, it's still running the improved Symbian^3, yes it's going to have the same functionality as devices like the C6, but it's going to be wrapped up in a very attractive package.