From AAS's department of the bleedin' obvious come comments from me after looking into data from the last ten years in the Symbian world, looking at screen sizes across a range of form factors and interfaces (including Series 80 and UIQ). Yes, form factors are gradually converging, and yes, screens are getting larger. No real surprise there then, but I thought you might be interested in the charts themselves below...

As a starting point, I took all the most significant and/or popular Symbian-based smartphones of the last ten years (from 2000 to 2010, from Nokia 9210 to Nokia E5, ironically two of the least representative, but hey....), running Series 80, UIQ or Series 60/S60/Symbian^1/Symbian^3, and then plotted their screen size diagonals, in inches, against date.

Any established AAS reader can probably work out what most of the dots are, e.g. the batch of 2.1" screened early S60 devices, the 2.9" screened UIQ touch-based smartphones, and of course the 4" screened Communicators.

Here's the resulting chart, lifted from my Google Docs spreadsheet, note that some dots represent multiple devices, with same sized screens but launched in the same year: 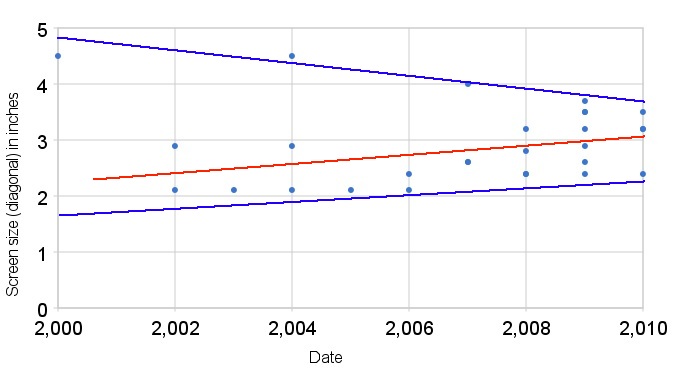 The blue lines represent the boundaries of screen dimensions over the years and, if you include the Communicators, you can clearly see an overall convergence in size. It's not really a surprise that screens are converging on 3" to 3.5" - this represents a display that's big enough to show media (important in 2010) and yet which doesn't enforce a device size which is too large for the man in the street. Again, I did warn you that these stats are from the 'dept of the bleedin' obvious'!

The red line, obviously, represents a guess at the average screen size over the decade. It's possible to fit either a straight line or a curve to the data, so I'm not going to attempt to predict whether size will carry on rising or where it will stabilise....

I was keen to dig a little deeper though, and apply some intelligent filtering. After all, some of the devices above are clearly atypical (e.g. the Communicators, with their clamshell form factor) and many, such as the E71/E72/E5 and the older 6630, N70 and newer N82, N79 and E75, all have screens physically cramped by a physical keyboard/keypad that can't be tucked or slid away.

Eliminating the above, i.e. looking just at devices whose screens are only really constrained by device size and not by a permanent set of front-facing text input buttons - so we're including the 7650 through the N95, the N96, the 5800 and now the N8 and C6 (among others), we get a more focussed chart, again note that some dots represent multiple devices, with same sized screens but launched in the same year:

In this case (in my spreadsheet) starting with the Nokia 7650 and ending with the C6 (both sliders, interestingly), you can see the gradual screen size increase quantified somewhat more clearly. It's clear that such full-face or screen+d-pad cluster smartphones have been naturally rising over the years, driven since 2008 by the reason to view video content more clearly and by the desire to interact with full-face content via touch on some models. Again, nothing really surprising there.

One thing which did make me think was the comparative lack of innovation in screens between 2002 and 2005/2006 - nearly everything from the Nokia 7650 right up to the Nokia N80 (running S60 3rd Edition) had a 2.1" display. It wasn't until the N93 came along with a huge-for-its-time 2.4" display that things started to change in the S60 world. Ditto for UIQ, which was stuck on a 2.9" display for an eternity and then downsized to 2.6", reversing the trend of the times.

The largest display of any Symbian-based phone in the last few years has been the Samsung i8910 HD, still topping most spec check lists - will we see a Nokia smartphone with a 3.7" or 4" display in the next 6 months? My money's on "yes"... 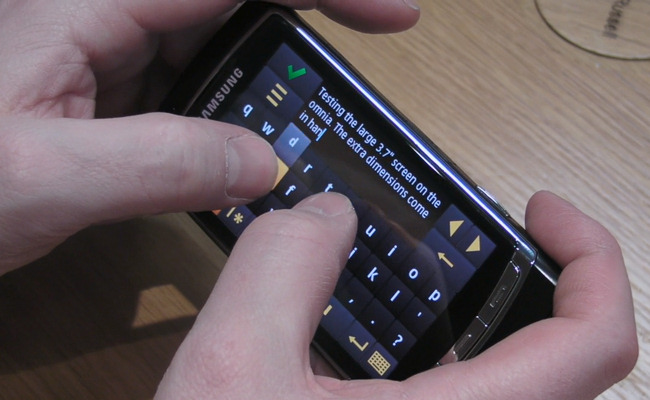