Today Symbian made available, via its developer website, a number of documents relating to the Orbit and Direct UI proposals that make up a major part of the changes in Symbian^4. These proposals offer a glimpse of what the Symbian^4 UI may look like and explain some of the key UI layout and design changes. Symbian are looking for the community's feedback, comments and questions about the proposals. Read on for more details and illustrations.

The Qt-based Orbit and Direct UI together encompass the major UI changes that are being introduced as part of Symbian^4, which replace AVKON (the current UI libraries and framework). Symbian^4 is currently being feature road-mapped (planned), with an anticipated 'functionally complete' date of late summer 2010, hardening in early 2011 and with the first device release likely to be in Q1 2011.

Orbit provides UI extensions (essentially UI widgets) for Qt that are optimised for use on mobile devices. Orbit can potentially be used on both touch and non-touch devices.

Direct UI encapsulates both interaction and navigation logic, together with finger/touch-optimised screen layouts. It describes how the Orbit widgets are combined together to create the UI and how the elements interact with each other. Direct UI (the current proposal) is for touch/hybrid devices only (i.e. current S60 5th Edition-like devices).

Read more here on Orbit and Direct UI from our piece last year: Symbian^4, Orbit and the compatibility break.

The image below illustrates the new layout template that will apply across Symbian^4.

The basic layout of the UI is being simplified. Rather than hanging all commands off an 'Options' menu, the new UI will include a toolbar (with up to four items) at the bottom of the screen, thus placing first order commands (most frequently used) directly on screen when a user first opens an application. Second order commands will be accessed via a drop down menu that is part of a reworked title bar at the top of the screen (see screenshots below). Commands can also be accessed via a contextual menu, which appears following a long press (e.g. list item -> long press -> context menu -> delete).

There will be improved full screen support for applications, with the ability to auto-dismiss the titlebar and toolbar. This is similar to the automatic full screen mode seen in the N97's Web application. 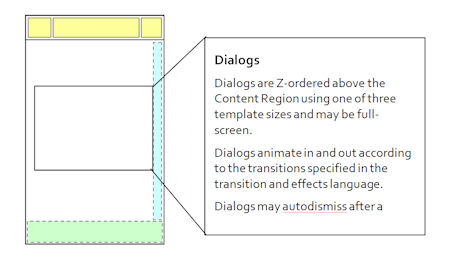 Dialogs will be 'floated' on top other UI elements and will be available in three sizes (in contrast to the current - 'stuck to the bottom' style). Dialogs will also be animated (a transition/animation engine is included in the platform) and may auto-dismiss after a set period of time.

Essentially, these changes move the UI away from its non-touch legacy towards a 'flatter' layout approach that is typical of other touch UIs.

More information is available on the Symbian Developer Wiki. 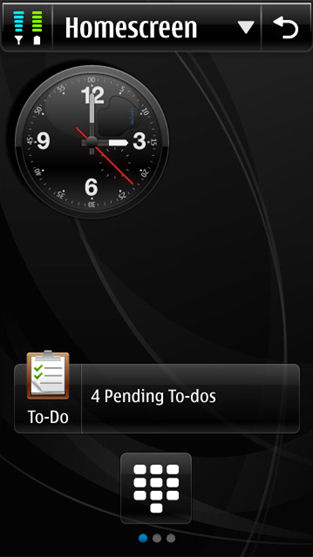 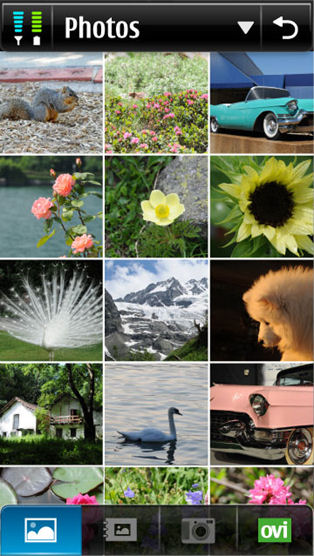 Of note in these screenshots is a reworked homescreen with variable sized and 'free-placement' widgets. The homescreen is made up of multiple pages (three dots along the bottom). Access to the equivalent of the current 'Options' menu is via a drop down arrow on top right of the screen. This drop down menu button is part of the reworked title bar.

In the Photos screenshot, there's the typical grid layout of photos with a top title bar and bottom toolbar. Notable is the back button in the top right hand corner - something which will be near universal in Symbian^4 it seems. 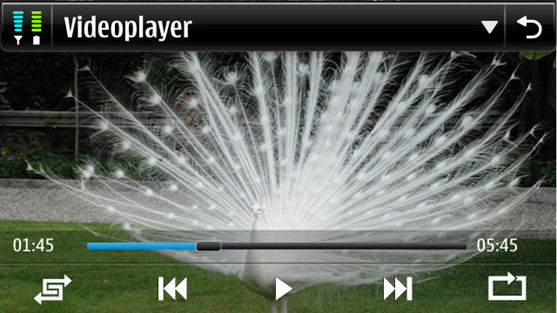 The Video player screen shows the layering effect (transparent control bar), which is enabled, in part, by the new graphics framework and engine that is introduced as part of Symbian^3.

We first saw some of these screenshots at Nokia's Capital Markets Day late last year. Clearly, more of the concepts that we provisionally labelled Symbian^3 are actually coming in Symbian^4. We'll be hearing and seeing more about Symbian^3 shortly.

It's important to realise that these are screenshots from a Concept Proposal. Symbian^4 is still being road-mapped and, as such, the screenshots should, at this stage, not be taken as indicative of the final product.

Layout simplification places first order commands (used most frequently by users) in the primary application view, second order commands under the Options menu or in Settings. End users can see the main commands of each application as soon as it is launched.