Trailed here at the start of the year, David Wood's huge 800 page book on the rise and fall of Symbian and the transition of its licensees to other platforms, against a background of massive change in the smartphone industry, has now been published, in electronic form. I've only skimmed through it so far, it'll take weeks to get through properly, but there's such detail that everyone will find plenty of interest. Symbian old-timers and enthusiasts, especially those with a development background, will gobble up the mass of detail about how the OS got started and how it evolved. While newcomers will pounce on the last part of the book and the background and reaction to February 11th 2011 (and Nokia's adoption of Windows Phone). 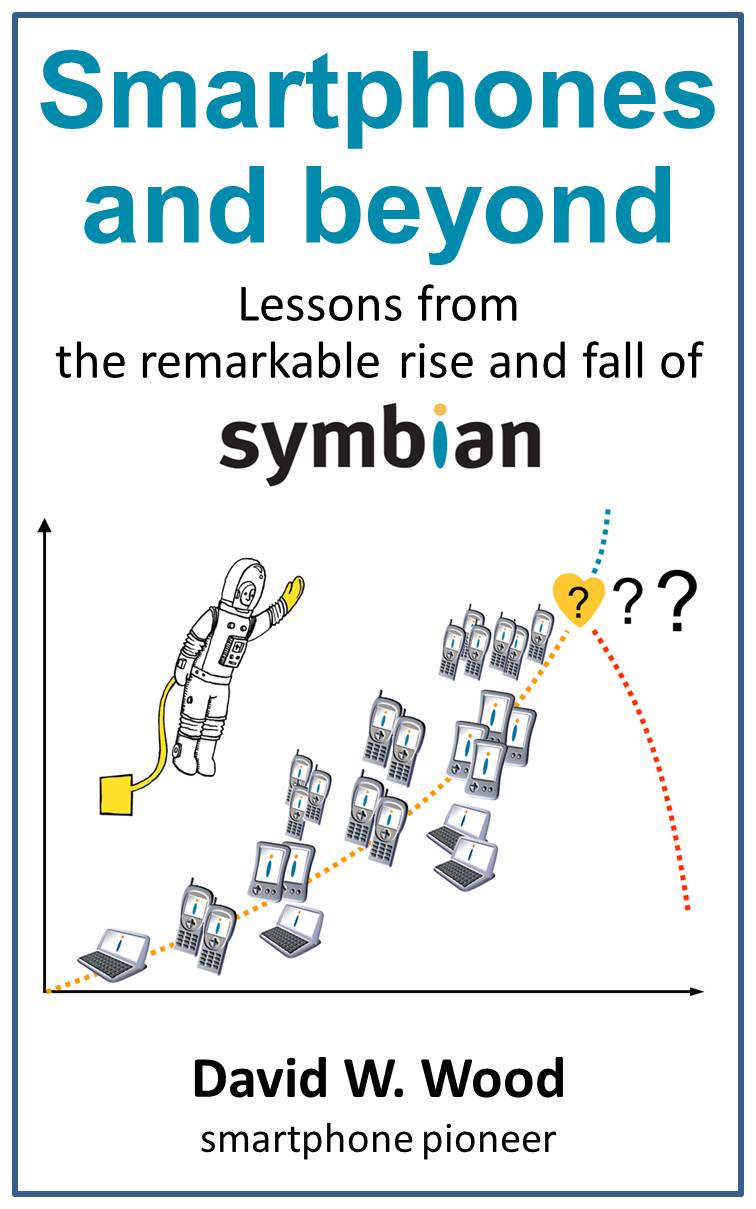 From my earlier trailer:

David Wood is something of a legend in the Symbian world, having been one of the architects of Symbian's predecessors, Psion's SIBO and then EPOC/32 operating systems, and then being intimately involved with the OS throughout the 2000s. If anyone was going to 'write the book' on Symbian then David's the man.

...Peppered with quotes, press release extracts, internal meeting slides, and so on, 'Smartphones and Beyond' isn't a light read, but for anyone who's genuinely interested in what went right and what went wrong inside this industry, David's book is well worth looking out for...

The book is now out in electronic form, at least, for the Kindle, here on the UK site and International (US) site.

Some extracts, to get you hooked:

On the subject of first getting going with Nokia and launching Symbian:

My first visit to Finland to meet Nokia coincided with a period of particularly cold weather. It was the evening of Monday 27th January, 1997. Along with Juha Christensen and Mark Gretton, I flew to Helsinki, where Juha had a hired car waiting for a two hour drive north to Tampere. Juha and Mark had suffered an uncomfortable flight from Helsinki to Tampere a few weeks earlier, on account of buffeting from turbulent weather, and preferred on this occasion to drive. When we finally arrived in Tampere, it was well after midnight. As we briefly walked outside, my face burned with the bitter frost of the night-time air. The temperature shock was a visceral reminder that I was in a very different environment from the one I had experienced in my nine previous years in software development at Psion.

During the car journey, Juha’s mobile phone had rung. It was a call from one of his industry acquaintances. The caller asked Juha, knowingly, “So, what are you doing in Finland? I wonder who you’re meeting there, eh?” Apparently he had called Juha earlier, and he had received a message from the network telling him the call could not be completed. The network message had made it clear that it was a Finnish mobile network. Woops.

This question caused us some consternation. Our trip to Finland was meant to be ultra-secret. I even wrote into my Psion Agenda, “Trip to Egypt”, making a play on the fact that we used the word “Nile” as the codename for Nokia. No one should know that we were talking to Nokia.

On the subject of reaction to Apple's iPhone in 2007:

What was less obvious, however, was that Apple was capable of learning a great deal from its experience with Rokr. It’s a mistake to conclude, just because a company has failed to achieve its market targets with v1 of a project, that it will inevitably fail in the same way with v2 and later releases. After all, Symbian had walked the same path: initial releases of Symbian OS were late and had reduced functionality, but the company put in place learnings from these experiences, and eventually built a very powerful software creation engine. In the same way, Apple converted its disappointments with Rokr into insight that helped it make such a success with the iPhone.

Second, the Symbian world underestimated the extent to which:

Further, Symbian was wrong to group Apple together with companies like Dell and Acer that were primarily manufacturers of computers; Apple was not only a manufacturer, but also the creator of a rich operating system (Mac OS). Critically, Apple had the ability to create a version of their desktop software (Mac OS) which could be used in smartphones (iOS).

[There's more, including a dramatic comparative encounter with one of Symbian's founders now fallen in love with the iPhone and its specced up Safari web browser.]

On the subject of February 11th and the Nokia strategy change:

Nokia’s announcements of February 11th, 2011, were the subject of avid attention within a group of Accenture Mobility personnel. A small number of us, including several ex-Symbian employees, had gathered for the day in Accenture’s Cambridge office on the Business Park, off Milton Road, to watch a live webcast of the announcements.

We did not yet know it, but the date of “February 11th” would come to be regarded as the blackest day in the history of Symbian – analogous (though in a much smaller setting) to the pivotal transformation in American public consciousness inflicted by the dreadful horrors of aircraft terrorism on September 11th, 2001.

However, Nokia boldly believed they could duck this dismal tide of failed relationships. They had a much closer hotline into Microsoft. And, it seemed, they had the special benefits of a new mobile platform from Microsoft – one which had learned from all its Redmond precursors.

However, even a cursory examination reveals a set of important ways in which Windows Phone 7 was uncompetitive as compared to Symbian, for deployment in mainstream smartphones:

If MeeGo was “not ready for prime-time use”, nor was Windows Phone. If Symbian needed lots of repair work, so did Windows Phone. Nokia’s judgement was that the required enhancements would come quickly enough to Windows Phone. That judgement turned out to be naïve. Not for the first –or last – time, a company underestimated the amount of effort required to improve a major smartphone platform.

You can buy Smartphones and Beyond here at Amazon. There's also David's mini-site about the book here, with extra extracts and full table of contents.

PS. The also prolific Andrew Orlowski has penned a lengthy review of the above book - also good reading, if only as an overview!

Filed: Home > Flow > Smartphones and Beyond - 800 pages of core reading and a saga of an entire industry