The last two and a half years of Symbian charted

Detailed data points about an industry are always welcomed, even if, in this case, the story that's told is a little depressing. Sebastian Brannstrom has been tracking sales of his two Symbian^3/Anna/Belle applications CoverUp and Podcatcher and these neatly chronicle the last two and a half years.  If you're a fan of Excel charts and hard numbers then have a look....

A big thanks to Sebastian for releasing all the numbers, dating from the first release of each application into the Nokia Store, ironically the exact same month when Elop stood on stage at MWC and told the world that Nokia was going all in on Windows Phone and that Symbian was to be a 'franchise' platform.

From that day on, of course, the supply chain started to wind down, with fewer Symbian devices making it out in the world for sale as 2011 went on and very few indeed in 2012. Indeed, in this light, it's surprising that the Podcatcher and CoverUp numbers held up as long as they did in 2012 - word of mouth presumably got round the existing Symbian ecosystem and existing enthusiasts got round to buying the apps. 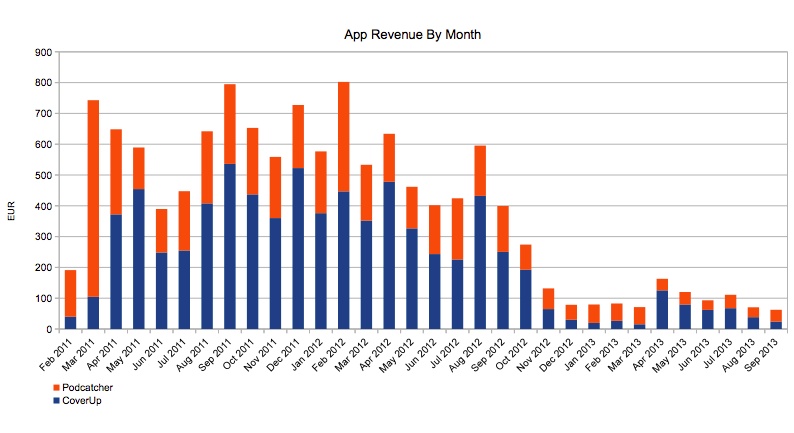 The tail off from late Autumn 2012 is quite dramatic and I'd estimate that this was the point where existing Symbian enthusiasts found themselves eyeing up the new Windows Phone 8 platform, plus top Android devices like the Galaxy S III were now ubiquitous, offering many of the same advantages as Symbian handsets yet with far more of a future.

Continuing to look at the data for these two apps, Sebastian has broken down sales by region - Europe has been a huge driver for him, perhaps unsurprisingly given that the apps are English only, plus Symbian's own European origins? 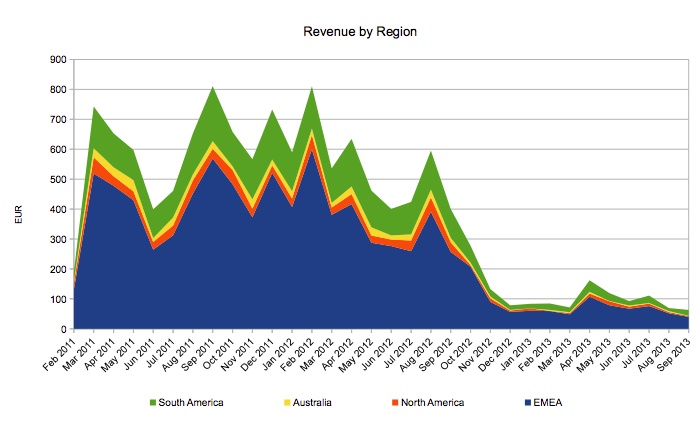 Again there's the same dramatic tail-off in Autumn 2012 - I'd love more comments on this from readers. There's one big oddity here, in the absence of significant sales from Asian countries.

Digging deeper, there's a breakdown by country across the whole sales period, showing where the Symbian ecosystem has been at its strongest: 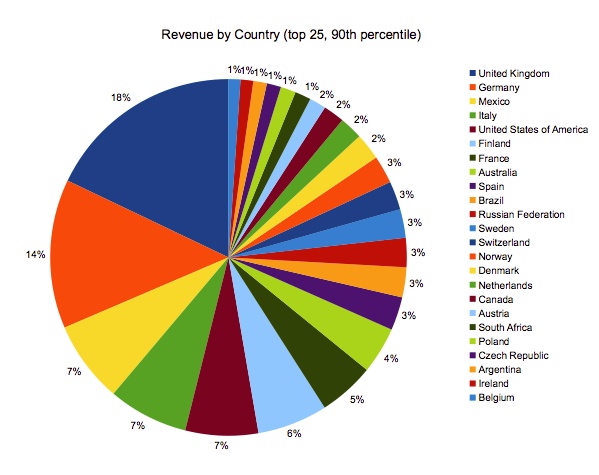 It's certainly very odd to see that there were no significant sales of the two applications in Asian countries like Singapore and India, two places where Symbian was traditionally strong. India especially because English is at least partly used there.

I'm sure the AAS armchair analysts here can throw in better theories and observations than me, anyway, so over to you!

Filed: Home > Flow > The last two and a half years of Symbian charted