Google Latitude to shut down on August 9th

It's true that Nokia Maps has been all-consuming on Symbian in the last few years, yet many people remember enjoying Google Maps on the platform back in 2007-2010. The Google Maps client from that era still (mostly) works on modern Symbian devices, in fact, with one of the most interesting features being its integration of Google Latitude, a way of finding out where your friends are. The service was arguably a little ahead of its time, coming before ubiquitous cellular data, meaning that many ended up turning it off for fear of extra data and GPS drain of their precious battery life. Some Symbian users do still use Latitude, I'm sure, which is why I wanted to note that, as quoted below, Google is terminating the service as of a month from today.

From the official Google Maps blog:

One important change you should know about is that Latitude and check-ins are no longer part of the new Google Maps app, and will be retired from older versions on August 9. We understand some of you still want to see your friends and family on a map, which is why we've added location sharing and check-ins to Google+ for Android (coming soon to iOS). More details about Latitude and check-in changes can be found in our help center.

From the Help Centre:

What does this mean for me?

It's somewhat telling that Google's older mobile applications aren't mentioned by name here, but if the back end for Latitude goes then so must the functionality on older clients. 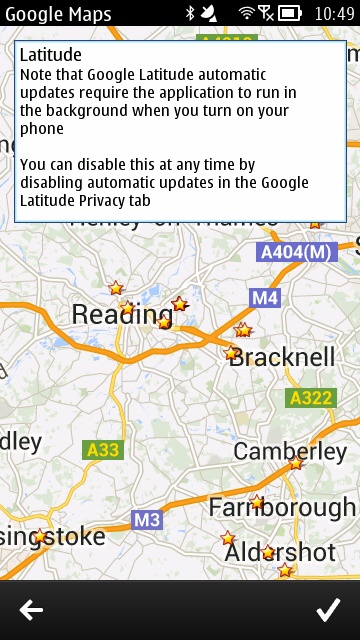 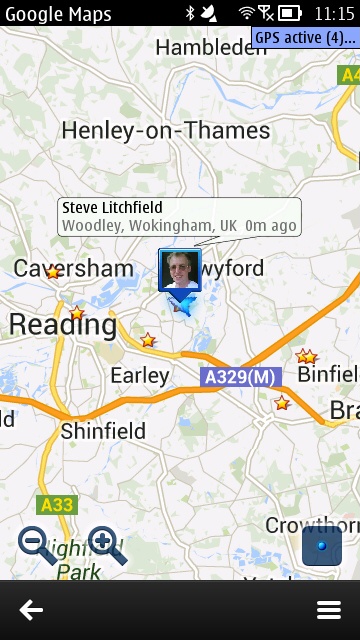 Starting up Google Maps with Latitude on my Nokia E7 today, note the confirmation that the service runs in the background, using GPS data and a little cellular data as well; (right) Well, that's me located and signed in, though it doesn't seem as if I have any Latitude friends anymore.... [sob]

The friend-tracking/check-in service never really took off in the meainstream, predating the likes of Foursquare, and is effectively replaced by the location features in Google+ and its Google Maps integration, though this is all heavily biased towards Android (naturally) and (to a lesser extent) iOS.

Rest In Peace, Google Latitude, in truth we hardly knew you...