This week Nokia published its annual corporate social responsibility and sustainability report ("Nokia People & Planet Report 2012"). Covering a wide range of issues it offers an insight into the broad range of initiatives that makes Nokia a leader in the technology sector for ethical and environmental issues. The report also discusses the impact of Nokia's 2011 and 2012 strategy changes on its employees and the communities in which it operates.

Here's how Nokia describe the report:

Since 2002, we’ve consistently reported on corporate responsibility, and each year we build upon our transparency and coverage of issues. Today, our report covers the ethical, socio-economic and environmental areas most relevant to Nokia’s business and its stakeholders.

The Nokia People & Planet Report 2012 is split into Nokia’s efforts for people and the planet. The People section discusses how mobile technology can be harnessed for the good of individuals and communities, but it also covers challenges we faced in 2012 as well as how this impacted our employees and the communities in which we operate. The Planet part reports on our initiatives to minimize the potential negative impacts on the environment and the positive contributions mobile devices can make to the planet. The report is only available in digital format, as we want to print less.

The reports talks in detail about the positive and negative aspects of Nokia's business operations, and details the company's overall performance, whether it met its targets, and plans for the future. 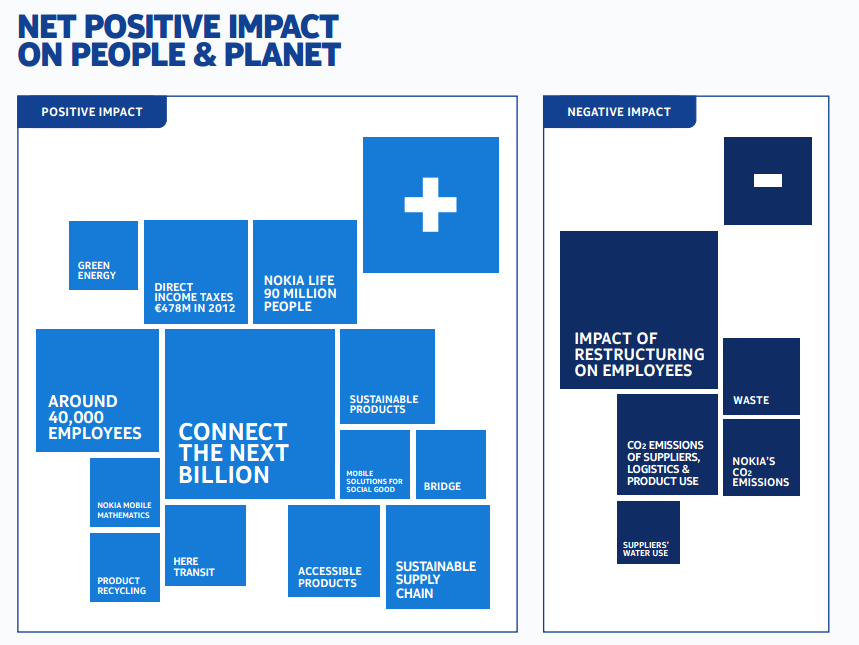 Here are some selected highlights from the report:

The full report can be downloaded here [PDF].