No, not a cheap attempt at Google search traffic on male enhancements, but another serious look at the ever changing, ever growing statistic that is phone screen size. Steve Litchfield looks at devices and use cases past and present, from Psion Series 5 to Apple Newton to Dell Axim X51V to Nokia 7710 and through to the Samsung i8910 HD in the current day. Initially cautious over whether phones might get too big, Steve points out that a 4" display is more a 1995 phenomenon than a 2010 one....

You'll remember a companion article that I wrote about a month ago? The evolution of the smartphone: Who moved the goalposts? In it, I postulated that the mission statement for smartphones had changed in the last three years: full-web browsing and video playback are just two of the uses cases that are now 'de rigeur', it seems. My point in the article was that the older phones (e.g. N95, E71) were still good at fulfilling their original design brief but that the extra convergence features had necessitated an enlargement in overall form factor and in screen size.

Opinion seemed to be split in terms of whether this enlargement was a good or bad thing - the obvious comment is that there will always be a variation in form factors, to suit all tastes and use cases, but the bottom line is that in 2010, bigger is usually better. In this feature, I wanted to widen the scope of my comparisons and musings, including demonstrating the advantages of having a larger, brighter screen in the Symbian world. 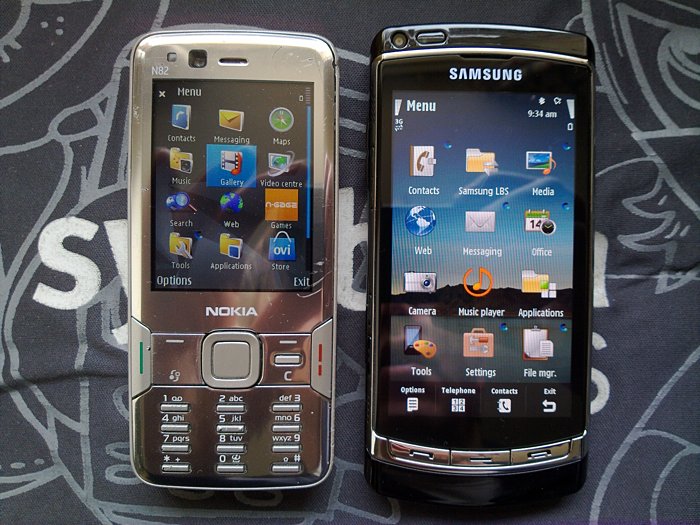 From the sublime to the ridiculous: 3.7" versus 2.4" - which display would you rather look at?

As mentioned in the first article, displays have gone up and down in size from the earliest days of handheld computing. The multitasking, mobile-office-centric Psion Series 3a, released in 1993, seventeen years ago, had a whopping 5.3" display, albeit monochrome and non-touch. More relevant to the modern age, the Psion Series 5 had a bigger, 5.7" resistive touchscreen. I know I'll get accused by all and sundry for going all misty eyed at Psion for the umpteenth time, but for newcomers to the handheld world, here's the Psion Series 5(mx) in all its glory, over fifteen years ago - an all-time classic design: 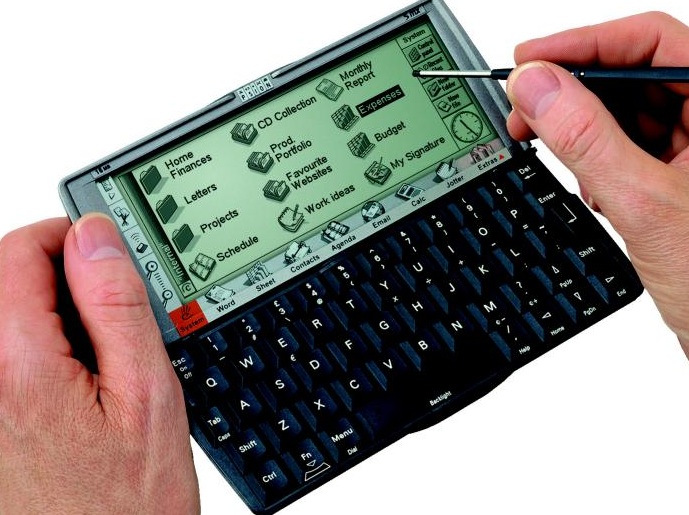 Elsewhere in the world of PDAs (Personal Digital Assistants), Apple's Newton MessagePad 2100 had a 4.9" resistive touchscreen, in a classic monoblock candybar form factor. Bear these screen dimensions in mind, many of these device screens mentioned are larger than the largest smartphone screens/designs of 2010. And noone batted an eyelid over size.

One new startup in the 1990s was Palm, of course, blazing a trail in the USA that mirrored Psion's in Europe. The original Pilot became the PalmPilot and then simply 'Palm', as in the Palm III, which sported a 3.3" resistive touchscreen. As the ambitions of Palm's software ecosystem (which used to be huge, back in the day) grew, so did the displays, to best show off the new info and games. The Palm T3, from 2003, below left, was one of the last of the breed, with a 3.9" display, largely thought to be about as large as PDAs should get. 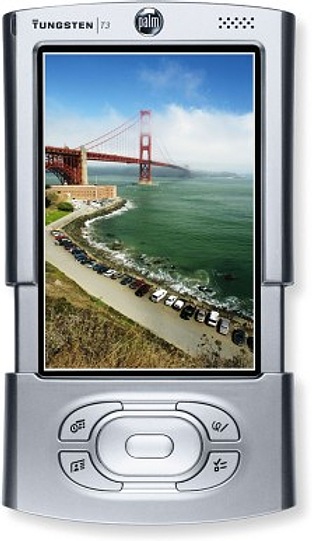 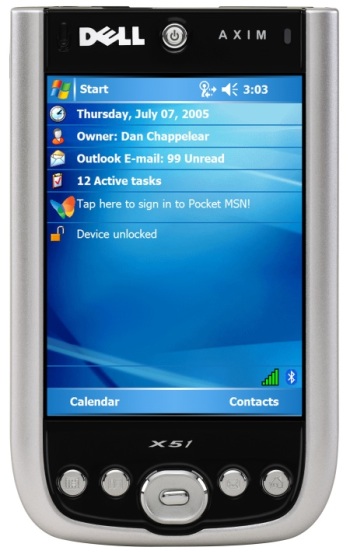 In the world of Pocket PC (which became Windows Mobile), the pinnacle of design was probably the Dell Axim X51, released in 2005, above, right, with a 3.7" resistive touchscreen. Hopefully you'll be spotting some kind of pattern in terms of device screen size equilibrium by now....

In time, all of these PDA platforms either died or acquired telephony. Psion (famously) got messed around by Motorola retreated in the face of the needed hardware investment, though the legacy of their vision lived on in the clamshell Nokia Communicator series: the 9210 and 9500 had a 4.5" display, while the oddball E90, slightly closer to the present day, downsized things slightly to a 4" display.

Palm split into two, equally famously, and then became one again, in the process bringing the Handspring Treo series back into the fold, before losing their way in the OS wars, and are now on the brink of extinction.

Windows Mobile phones were awkward beasts for a while, but ground their way towards the current pinnacle devices, such as the HTC Touch HD 2, with a 4.3" capacitive touchscreen - just as Microsoft pulls the rug under the whole ecosystem by pre-announcing Windows Phone 7 stupidly early.

Two newcomers to this world were notable, of course. Apple's iPhone has always had a 3.5" display, with capacitive touch - the first device to feature this, while the Android OS phones coming out are levelling (in 2010) at around 3.7" capacitive screens (usually with OLED displays).

In the Symbian world (and excepting the Nokia Communicator series, which was tracing a parallel path before being left orphaned), the kicker was when these devices became smartphones, i.e. 'phones' that happened to be smart. At which point there was an attempt, from about 2002 onwards, to squeeze a burgeoning smartphone OS into a traditional (i.e. small) phone form factor, starting with the Series 60-powered Nokia 7650 (with a 2.1" screen) and moving through the N70, N95 and on to the present day, with screens getting steadily larger.

Footnote 1: There were also a series of touch devices running UIQ on Symbian from Sony Ericsson and Motorola. The P800/P900/P910 had a 2.9" screen, large for its time, though still fiddly in the context of this article - the interface was very much stylus driven.

Footnote 2: sometimes referred to on All About Symbian, mainly because we like to show how smart we are, there was also "Nokia's first touchscreen smartphone" - no, not the 5800, but the 7710, shown below. A potentially great Internet and media tablet that was either the great-grandfather of the N900 or something which noone really cared for, depending on your point of view. It did have a whopping 3.5" resistive touchscreen though... 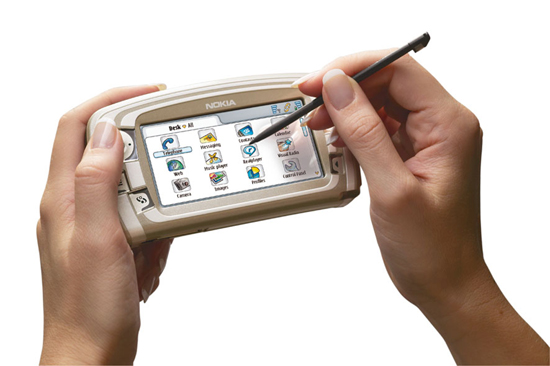 So, bearing all the above in mind, let's look at the screen sizes in the Symbian-powered smartphones of today. Note that in most cases, the list of devices using each screen size is too long to show in the graphic - hence the "etc". Note also that in some cases, the screens are used in landscape orientation, not the portrait shown (e.g. Nokia E71). Aligned top-right, here's how the screens listed would look when compared directly:

Notable is that there's a maximum width at play, beyond which the device becomes too wide to comfortably hold as a 'phone'. The Nokia E61 and E61i broke this rule, by turning the 2.8" screen on its side, and paid the price, arguably, in that they became more or less a two handed tool.

Also notable is that the Symbian world seems to have topped out at the same equilibrium point as the rest of the industry. We have Samsung's i8910 HD with its 3.7" OLED screen (shown above, with the N82), matching exactly the displays of the Google Nexus One and HTC Desire (to name but two 2010 flagships), with Nokia's N900 and N97 matching the Apple iPhone 3GS's 3.5" display (size-wise, at least).

As I described in 'The evolution of the smartphone: Who moved the goalposts?' , bigger is better in 2010. Whether browsing round a map or watching a video, whether browsing the web or playing a game, whether trying to read your email, bleary-eyed in the morning or working through a spreadsheet or PDF that the office just sent over, the larger the screen the better.

And there's an additional factor. Although, with many large screened-devices, you've lost any space for a physical keypad, when you get to 3.7" or 4" screens, there plenty of space for a virtual qwerty keypad without too much of a compromise.

Screen technology and the future

The screen tech used also plays a part, of course, though it can only compensate for lack of size to a degree. The Nokia N86 8MP, for example, has a stunning OLED screen - but at only 2.6" you're going to be squinting at it all too often or mashing away on the d-pad. The Samsung i8910 HD has, in most light conditions, easily the best screen of any Symbian-powered smartphone - and it has capacitive touch too, giving the best of both worlds in most conditions.

OLED itself starts to struggle in bright sunlight, which is where the next tech leap will come in - 'Super AMOLED', as used in the imminent Android-powered Samsung Galaxy S, puts right most of the sun intolerance while keeping the brilliance indoors. In Super AMOLED, the touch layer is built directly into the OLED array, doing away with the need for a separate touch component. This reduces reflectivity in sunlight (apparently by up to 80%), while allowing more of the AMOLED light through (i.e. increased transmissivity, apparently by up to 20%), giving a significant boost in visibility in very bright conditions.

I'm not allowed to divulge the little I do know about upcoming Symbian ecosystem designs, but I will let slip one clue: large screens are definitely 'in' and you should be watching out for 3.7" and 4" designs from the likes of Nokia and Sony Ericsson - and wouldn't it be nice if Samsung (Symbian members still, remember) agreed to license out their Super AMOLED screen tech at the same time?

We've come full circle then - from the 4" plus screens of the early Psion and Apple Newton through small, distinctly phone-centric 'Series 60'-era designs, right through to full face 4" screens that enable new areas of convergence and usability. And it's only taken us seventeen years!