Why do so many gadget fans buy devices on their launch day?

When the mainstream media covers a gadget launch they often show queues of people waiting to buy it on the first day it goes on sale, but why do people do this, and is it a good idea? AAS takes a look at the cult of the Early Adopter, people who have to have something when it's new because it's new.

Why do so many gadget fans buy devices on launch day?

Imagine if there was a shop where you could buy all the latest gadgets before anyone else. However, that shop's gadgets are much more expensive, have far more faults in the hardware and firmware, suffer from compatibility problems, and lack widespread support from third party manufacturers and developers.

Would you buy from that shop so you could have gadgets first, or would you wait a bit and buy elsewhere?

Well, that's the dilemma facing "early adopters", the kind of people who are tempted to get something as soon as it's available to the public. Almost every device from every manufacturer has been somehow improved over the course of its lifetime, and anyone who buys at launch is getting the worst possible deal. 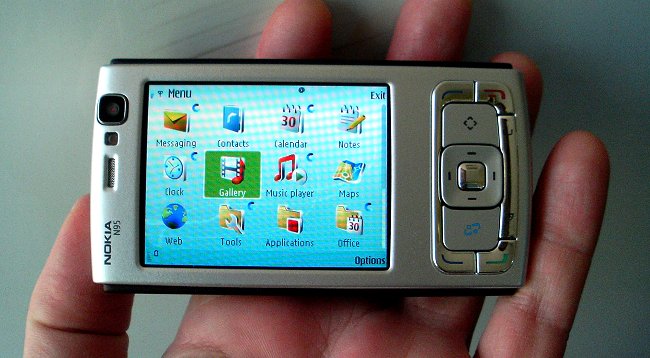 Perhaps the best example of a device improving over time is the Nokia N95.

At its launch, the N95 started out with a low amount of free RAM, a very high price, unstable firmware, loose slider mechanisms, a very slow camera, slow GPS and an unstable maps application.

Now, getting on for 2 years after its release, thanks to firmware updates, the N95 has a lot more free RAM, its price has almost halved, the firmware is much more stable, the slider mechanism tends to be stronger, the camera is much faster, the GPS locks more quickly, and the maps app is much more stable. On top of that there are all kinds of completely new features added to the phone such as built-in music and gaming download services, a podcast app and an internet radio directory. There's also a much larger and more diverse third party software and hardware market, so you can buy far more games, apps and accessories for the N95.

A textbook case against early adoption: the very first Sinclair QL models had an external (!) ROM chip containing the OS because it wouldn't fit on the internal ROM chip, and the QL format as a whole never took off so there was barely any software support.

So, if we know gadgets are rubbish at launch, why do people buy them?

There are lots of reasons why you might get a device on its release date:

- To show off to your mates, it's the latest thing and you've got it, which means it's more of a status symbol than anything that serves a practical purpose.

- To satisfy that craving you've had for the device after all the hype and rumour that preceded it: you want to see it for yourself. Again, this isn't really the device being a useful tool, it's more an object of desire.

- To genuinely serve some purpose that other devices aren't capable of, with perhaps a crucial combination of features. But how often is this true, and how often is it just a cover story for one of the reasons above?

In short, people who buy a device at launch mostly seem to do it because it's fun at a very basic level, satisfying anticipation like a child getting a new toy at Christmas (and indeed many technology journalists openly call them toys).

But if the manufacturers know gadgets are rubbish at launch, why don't they make them good before they release them?

To some extent manufacturers DO try to make gadgets good at launch. Even a cheap mobile phone has to go through a lot of testing before it hits the shop shelves, and much of that testing is required by law for the sake of safety and preventing radio frequency interference.

But it's very difficult to fully test a modern device, especially mobile phones where each model may come in literally dozens of different variations for different frequencies and network operators. Phones can do so many things nowadays (and smartphones can do them all at once) that there are many many many different situations where things can go wrong, and it's a heck of a task to go through each one of those situations.

Also, even with the most exhaustive testing, there's never a point where any product is 100% free of problems. There will always be certain circumstances where a device can't cope, where it crashes or produces an error message. You can never ever get rid of all of the bugs, especially in something as complex as a smartphone. The challenge for manufacturers isn't to rid their product of bugs completely, but to decide how long to continue the search for new bugs and how long to fight known bugs. Sometimes they get the balance right, sometimes they don't, but it's surprisingly difficult to know what consumers will accept.

There's also pressure on manufacturers, especially in the electronics field, to release gadgets before their components become dated. How often has a phone received poor reviews because its features are considered a bit old-fashioned? The Nokia N81 would certainly have received better reviews if it had had an autofocus camera with a resolution higher than 2 megapixels. One of the main criticisms of the original iPhone was its lack of 3G, and when Apple added 3G for the second iPhone they were still criticised for the relatively primitive camera.

It seems that many gadget fans will not be happy unless their devices have technical specifications at (or respectably near) the cutting edge. But to do that, manufacturers have to keep the testing process as short as possible, which in turn reduces the manufacturing quality. A device can have the very latest features or the very best reliability, but not both.

A very peculiar idea of betrayal

One strange phenomenon is that some early adopters feel a sense of betrayal when a manufacturer releases a new model and they own the preceding model. Some bloggers even use rather extreme phrases like "stabbed in the back" and "forced to upgrade" and "exploiting their customers".

To give an example that may be familiar to many readers, Nokia's original N-Gage smartphone released in 2003 was heavily criticised for its "sidetalking" (where you had to speak into the side of the phone during calls), the difficulty in changing gamecards (you had to switch off, remove the cover, remove the battery, change the card, replace the battery, replace the cover and switch on) and various other bits and pieces. To respond to this criticism Nokia released a newer version in 2004 called the N-Gage QD, which was essentially the same hardware but fixed most of the design problems associated with the original N-Gage. While this action made sense to most outside observers, many owners of the original N-Gage were furious, and some even came up with a conspiracy theory where Nokia wanted to "force" people to buy two devices instead of one.

To answer these questions we have to go back to the reasons early adopters buy gadgets at their launch: they want the latest gadget to show off to people, and they want to find out what the latest gadget is like in real life. If a newer model comes out, the older model no longer has the same value as a status symbol, which explains the feeling that the early adopter has lost something. And a newer model also starts a new itch in the "got to buy one to see what it's like" early adopters, which explains their feeling of being forced to buy another phone.

The truth is that no one is forcing anyone to buy anything, and people don't really give a monkeys which phone model you own, but it's very difficult for some gadget junkies to accept this.

Even NASA hates being an early adopter

Professionals in many fields actively avoid brand new gadgets because of their innate instability and unknown failure rate.

NASA obviously know a thing or two about high technology, and they're obviously "power users". But even they famously went on eBay in 2002 to buy second-hand microprocessors which were so old that they were no longer in production. It sounds insane, but if you're trying to make sure that a very complex machine like the Space Shuttle works, the best replacement for a broken part is exactly the same kind of part. If you use the same components you know how they behave together from previous tests and flights, whereas new and experimental elements could cause unpredictable effects on the system as a whole.

A site which may be familiar to AAS readers, Nokia's Beta Labs where upcoming software is tested by early adopters

If you're purely interested in good, reliable hardware then you certainly wouldn't be an early adopter. Early adopters place novelty above stability, which isn't a good idea if you're going to depend on a device.

However, early adopters do serve a very useful function for the rest of the gadget world by volunteering large amounts of their time and money towards making products better, and providing vast amounts of feedback which clever manufacturers would do well to listen to. Public beta tests depend entirely on the early adopter mentality, where people are willing to put up with really buggy and unstable products just so they can get an early look at them and perhaps brag about it to their friends. Without early adopters, hardware and software development would probably be a lot slower and less efficient.

It's partly because of the N95's early adopters in 2007 that the N95 is so much better in 2008. Even those of us who have chosen to wait should be grateful that there are people who can't stand waiting.

Filed: Home > Features > Why do so many gadget fans buy devices on their launch day?