The rise and rise of the ³ber-utility

Steve Litchfield explains the reasons for the ever-present über-utility on each (in this case) Symbian-powered software platform. The users always get what they want in the end? Yes, although it's easy to see both points of view here...

It's been fascinating to watch the development of each handheld and smartphone computing platform over the last fifteen years, from the appearance of the Psion Series 3 running SIBO, through EPOC and the Series 5, Palm OS, Windows CE/Mobile and of course modern Symbian platforms such as UIQ, Series 60 and Series 80.

Here's a question: what's the one thing that all of these have in common?

In each case, the OS developer and manufacturers produced devices with little control of the underlying files and running processes), the idea being to shield the user from all the technical goings on and leave them to get on with the business of working and organising.

The problem, of course, is that while this is fine for your techno-phobe partner or mum or managing director(!), those that want to do specific jobs (phone calls, games, address book, calendar and maybe some images and music), it leaves them in no shape whatsoever to fix any problems that occur. From running out of flash memory or RAM to rogue applications or even malware, the average user will have no clue what to do and the OS developer and manufacturer have rarely helped in terms of providing tools that let the user see beneath the surface of their handheld or smartphone.

Now, I can see both sides of the argument here - manufacturers don't want users fiddling with files and processes that they know nothing about. But on the flip side, they're inviting even more calls to their support lines from people with problems that are easily avoidable with a little education and enough utility functionality in the OS/interface.

With the Symbian OS world in focus here, I present as evidence the existence of the two really huge uber-utilities for S60 and UIQ, FExplorer and SMan respectively. Each was created to fill a specific 'hole' in the OS and has grown to fill several 'holes'. Each utility has always been free and has grown function by function to become almost indispensable on its smartphone platform. 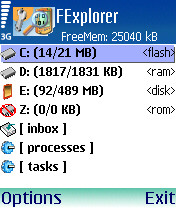 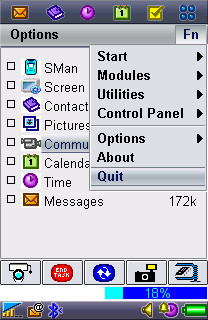 Now, I'm not talking about under the hood hacking here. FExplorer and SMan, at their core, allow:

Yes, these functions are beyond the beginner, but I'd argue that anyone with any enthusiasm for their smartphone  would have need of them before long.

To Symbian and to the folks at S60.com and UIQ, and of course to Nokia, Sony Ericsson and the rest, I'd say that most of these functions are far better implemented at OS level rather than being patched in by a third party. By all means hide the functionality from obvious view, but it should be there for those that need it.

To anyone with a smartphone running S60 or UIQ (and that's most of them) and who hasn't already installed FExplorer or SMan, I'd say run, not walk, to the relevant sites (FExplorer /SMan) and get downloading. It'll have major impact on how you use and manage your mobile 'brain'.

Filed: Home > Features > The rise and rise of the ³ber-utility