As we rapidly approach the formal opening of the Symbian Foundation, I caught up with Thibaut Rouffineau, Head of Community and Program at Symbian Foundation, to discuss the challenges and opportunities in setting-up to support developers and the role of academia in the software industry.

Richard: Hi Thibaut, thanks for talking with All About Symbian. It must be hectic times for you as the formal opening day for the foundation approaches. As we get close to the launch what is be biggest challenge you have had to address internally?

Thibaut: I think the biggest challenge is moving development management from local teams to international ones. Up to now development managers have had a team around them, have been able to easily conduct regular development scrums, then plan and control work. Now development teams will be scattered throughout the world, so there will need to be at change in mindset to deal with this, and we have a big program of training in place to make sure we make the transition smoothly.

On the application developer side, we've been working with Sony Ericsson Developer World, Samsung Mobile Innovator, and Forum Nokia to figure out the story for day one and the future. Symbian Foundation will be the home for everything cross platform, such as API documentation, SDKs, and other tools. The manufacturers’ sites then become the resources for information on devices and manufacturers’ differentiating APIs.

Richard: What about access to the source code and involving developers in maintaining and upgrading Symbian OS?

Thibaut: I’ve certainly had many developers ask about contributing to the code base. I’ve been careful to point out that getting involved with source code development will require a strong commitment, the stronger the commitment the more rewards for the developer. However, this commitment is something all developers need to think about, for many developers contributing simply won’t be practical.

Richard: The items you've mentioned so far focus around the technical aspects of developer support, is the foundation also going to be picking up developer marketing? I'm thinking here about things like case studies.

Thibaut: We will certainly be looking out for stories about developers who have come to market with the Symbian Foundation, to understand the challenges they faced, the channels to market they found, and the success they achieved. I will certainly be encouraging developers to come forward with these stories and we will be ready to help them present those stories to the world.

One aspect of developer support that is preoccupying me is channels to market. At Mobile World Congress we saw two or three new online stores launched. This creates a challenge for developers to identify who they should contact to find the best channels to market. At MWC I seemed to spend a lot of time putting developers in touch with the right people to market their applications. This is the kind of on the ground business development that needs to happen within the Symbian Foundation. Fortunately we will have people to do that based in Europe, the US, China, and Japan and we’re looking at India too. 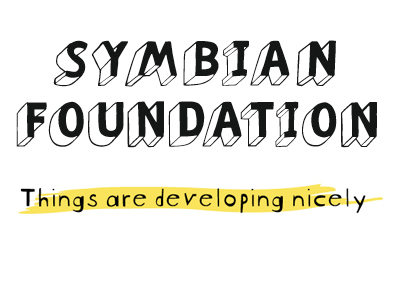 Richard: Overall do you see Symbian Foundation’s developer support as business as usual, simply carrying on the work of existing developer programs?

Thibaut: Some of what we do will continue the work currently being done elsewhere. Some of it will change - for example, the Carbide.c++ tools will come into the foundation as an open source project and open up new opportunities.

What will be different is the degree to which we will be encouraging developer involvement. As I’ve already cautioned, contributing to source code won’t be for every developer, however we will be actively supporting and leveraging the wiki concept to encourage participation by those developers who want to contribute in other ways.

For those who want to contribute to the code, the Symbian Foundation will include many features Symbian developers won’t have seen before: A completely open bugzilla system, where developers will be able to see a list of all the known bugs and the source code management system. These are, however, only two aspects of the information we need to make available to developers. This is where we're spending most of our effort right now, integrating all these tools into the website.

Creating an application developer website is something that is fairly well understood, you can bring some innovation, but largely you just need to follow the formula. With the new Symbian Foundation web site the challenge is not just to provide traditional developer support, but also to give foundation members access to 40 million lines of code. Added to which is all the essential background information; project meeting records and developer discussions among others. It’s a big job and keeping us very busy.

Richard: In among all this Symbian Foundation seems to be building ever stronger ties with universities. How does this fit into the scheme of things?

Thibaut: Universities are hotbeds of innovation. We've seen a lot of cool applications from them, like Shaker Racer and an application we showcased at MWC which reported breath alcohol using a Bluetooth breathalyser.

The other important reason for working with universities is because of the business challenges presented by open source – if the software is free, how do you create the revenue to support a business and ultimately development of the free software. Because this is new territory, universities are doing a lot of research around business models, looking for the balances between product and services, and where revenue can be generated. As we see more software go open source, and because of the obvious relevance to Symbian Foundation, we are keen to work closely with universities in researching and formulating business models.

Richard: Thank you for these insights Thibaut. Perhaps we could conclude by returning to developer participation in the Symbian Foundation. Developers can currently apply to become member of the Foundation. Is this all they can do at the moment?

Thibaut: Developers can certainly do more if they want. We will be beta testing the systems that will provide developers access to the open source project. If developers want to get involved they can register interest by ticking the calling all developers box on our contact form.