Scott Foe - Looking to Reset Gaming The World Over?

When Scott Foe takes the stage, it pays to take notes - even more so when he presents a masterclass on promoting games and the idea of bacterial marketing at the recent Edinburgh Interactive Festival.

Some three years ago, the elevator pitch went like this... "It's a game about games." At which point Nokia let Scott Foe off the leash and the result was Reset Generation. So what do you do as a developer behind one of the most keenly awaited games on any platform during the launch week of the game to an overwhelmingly positive reaction? Why, you fly from San Francisco to Edinburgh to do a presentation at the Edinburgh Interactive Festival on 'the reset generation' - the people who have grown up with video games, that expect reset buttons everywhere and games whenever they want them. Of course you do...

Naturally Foe took a few moments to make sure the audience were aware of the game Reset Generation, but this was no trailer and promotion push for the sake of it. Nokia had indicated that the topic of touch controls and haptics might make a good talk, but in the end the focus was less on the near to medium goals of Nokia as a company, but a class on marketing games to the reset generation. This isn't surprising when Foe announces his own personal idol. Not for him a game designer or programmer, the honour goes to Peter Drucker, a well know Management Consultant, widely acknowledged as the father of modern management. How things work is a topic close to Foe's heart.

Foe asked a simple question. Where is the YouTube of games? After all, advertisers and marketers love the viral nature of YouTube and its ilk, and the myth of 'promising a viral hit' is the grail of many. If games could have something similar, then they could be the breakout medium of the 21st century. Reset Generation has the beginnings of this, with the free to play, and 100% compatible embeddable PC version of the game. It also drops many of the stumbling blocks to games online that Foe can see in the world today, and he hands developers four golden rules to successful online gaming:

But to take off, the YouTube effect needs to be in place. Games need to be insanely viral to achieve this, even in the multi-platform world of today. It's at this point that Foe steps up and presents a vision that would delight gamers the world over (and I suspect raise some corporate eyebrows as well). The .gp3 file. 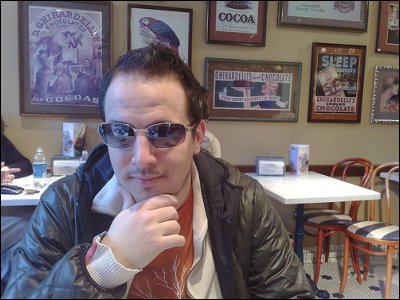 What is the most viral route on the internet? Piracy. And specifically music, in the form of the .mp3 file. What is needed is an MP3 of games. The Game P3, or GP3 file. Any gaming ecosystem is made from four basic elements, he explains, from the network, the display, the audio and the interface. Looking at Nintendo, they've had a lot of success in playing with the interface (bringing in the Wiimote, for example), but platforms now can happily run other platforms' games (e.g. the Microsoft Xbox running Nintendo Gamecube games). Emulation is that step, with the ability to play any game from the last thirty years, but you have problems in finding the emulator code, then seeking out the games, the bits to run the required peripherals, and all of that in the underground pirate space.

The principle of the GP3 file is in there. Each game needs to be a single file (like an MP3). But rather than have to seek out the emulator to run the code, the emulation code should be bundled inside the GP3 file - all you need then is a simple client that runs on the target device. Write that one shell (and with apps running in a web browser window, this idea is out there already) and every GP3 file out there, be it a classic title from a ZX Spectrum or the next monster from Sony, could be played in the client.

So where is the money? Well, Foe has already stood up on stage as a company man and said piracy can be a good thing, and pointing out someone has to say this. Rule one in making money? Own the client player. Own the game store the client talks to, license the client base - sure, the consoles might not bite, but how about every DVD player or Cable box shipping with this installed? Build a trusted brand, and spend money on marketing. And if you're worried about where the income is, with all these platforms and games, the answer in this perfect world is simple. If you can ship the emulator code in the GP3, then ship the store inside the file as well. Suddenly the pirates become your Wal-Mart and act as the slickest store front in the world, shipping bits around the globe.

Naturally this is blue sky thinking, I seriously doubt that anyone is working on this, but I recall a presentation made many years ago - again by Foe - on what the perfect on-line multi player game would need to achieve to overcome the problems of disparate skill, distribution, latency, balance and fun. At the time, it seemed to be a rapid fire look over the whole landscape. Now it seems to have been the foundation of Reset Generaion.

So what to make of this talk? I'm going to zero in on one thing. Foe acknowledges that to have GP3 work would need a lot of skill and a lot of luck - the exact same phrase he uses to describe his favourite games, such as Texas Hold 'em Poker, and which could also be easily applied to Reset Generation. We already know that Foe can turn his hand to a good game given free reign. Assuming that he's looking for a new project after a well earned six week holiday in World of Warcraft, perhaps his subconscious is trying to point him towards the next windmill?